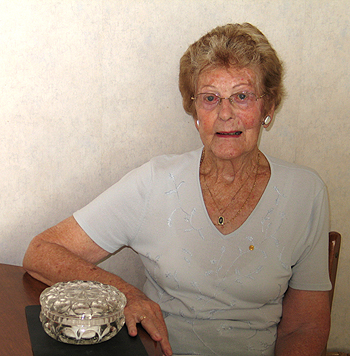 Stayed with a friend of my mother’s in West Wallsend (Hunter region, New South Wales).

Nurse for TB Sanatorium, Turramurra, Sydney and hospitals in Cootamundra and Sydney.

I was christened Hilda Loverseed and during my early school years we girls sought to choose nicknames based on boy name-sounding equivalents. Nobody could come up with a name which rhymed with Hilda until I said that at home I was called ‘Hilli’. From then I was called ‘Billi’ and the name stuck. I even introduce myself to anyone today as Billi.

My father had previously been married and had a son called Herbert. He and I were always very close.

I was born, the only child of James and Mildred Loverseed, on 11 October 1922 and grew up in London. My father had previously been married and had a son called Herbert. He and I were always very close. He was much older than me and he gave me this cut crystal powder bowl. It was a present from him on my 21st birthday and I have always treasured it.

…we were going to the air raid shelter every night. You got used to the bombs but the V2 rockets were the worst. You could hear them coming…

My father died after a long illness in 1936. I left school in July 1939 and war was declared [by Britain against Nazi Germany] on 3 September. I started work in the records section of the Royal Arsenal [armaments factory] on my seventeenth birthday. By September 1940 we were going to the air raid shelter every night. You got used to the bombs but the V2 rockets were the worst. You could hear them coming and when they cut out while they were heading your way, you ducked. If they went over before they crashed then you knew some other poor bloke was getting it.

Christmas came and I bought a diary. In the back was a section, ‘Careers for Girls.’ Nursing appealed to me and I began at a [London] hospital in January 1941. Then I went on to do my midwifery course – worked like slaves there with poor food. We used to pinch the patients’ Horlicks to drink to keep our strength up! I couldn’t stand that, so chose to go to the Isle of Wight and did TB (tuberculosis) nursing for 12 months. While I was on the island a friend of mine came home with a pile of brochures on Australia. I read them, went to Australia House and took these brochures home to my mother and said, “How would you like to go to Australia? Better food, better weather and better pay”. She said she would. She promptly sold her house and furniture, and moved in with her sister. I can remember wearing all these clothes, standing at a bus stop in the snow, absolutely frozen, thinking, “Thank goodness I’ll be in Australia soon”.

The trip was the first real holiday I had had for years. The food was much better; we were six to a cabin but I used to take my blanket and curl up on the deck in a deckchair…

The migration scheme started in March 1947 – the Ten Pound Poms. I was on the Orion by June as they wanted nurses here, but as my mother had no trade she had to wait 12 months and finally came out on the Ranchi in 1948. There were three nurses on board, the first ones after the war. A lot of the men were going to Tasmania, to the hydro electric scheme. The trip was the first real holiday I had had for years. The food was much better; we were six to a cabin but I used to take my blanket and curl up on the deck in a deckchair. We were able to get off the ship at Port Said and Ceylon. We bathed in salt water and had a basin of fresh water to wash in afterwards. There was a swimming pool on board that was emptied each night and refilled each morning. Several of us were first in it at 6am as it got very murky during the daytime.

My mother had a friend whose stepsister lived in West Wallsend [near Newcastle]. I had written to her saying that when I got settled, I would contact her. But the good lady had come to Sydney and when the ship docked, she came aboard and asked to see me. When the purser called over the loudspeaker that I was wanted in his office I thought, “What is wrong now!?” But this lady said who she was and took me off the ship and to her home.

…one young man started giving me cheek while I was going around taking temperatures. So I picked up an apple and threw it at … the man who became my husband several years later!

After two weeks I said, “As lovely as it is here, I have to get work”. I was on a two year contract. So I went to Sydney and stayed at the YWCA where we were given one week’s free board to find a job. I went to the Nurses’ Association and they sent me to the Red Cross in Waverley where I stayed for six months. There I learnt about the TB Sanitarium, The Lady Davidson Home, at Turramurra. I started there in January 1948. When I arrived there were only a few patients in the beds – most had gone home for Christmas. Within a few days they all started coming back and one young man started giving me cheek while I was going around taking temperatures. So I picked up an apple and threw it at him and said, ‘Don’t give me cheek.’ My first words to the man who became my husband several years later!

I wanted to travel so I worked at the hospital at Cootamundra [in central-west NSW] for a while as a night sister. But my mother was lonely when she arrived and so I came back to Sydney. Jack and I were married. I would have continued nursing but Jack and I both contracted polio. I was paralysed all down my left side and I still can’t lift my arm very well. Jack had TB but had been discharged. He’d been in the Navy and all of the 14 men on his ship had contracted TB.

Jack had built a caravan and so we set out. We got as far as Brisbane when Jack became very ill and was hospitalised.

Because of the polio they said if we could get in to warmer waters and swim, it would help bring the muscle tone back again. So we decided that we’d head for Queensland where it was better weather all the time. Jack had built a caravan and so we set out. We got as far as Brisbane when Jack became very ill and was hospitalised. Our first child Rhonda had been born by then. This would have been about 1952. A new drug came out and they asked Jack if he would be a willing patient. He said he would, and it apparently just formed a sort of solid mass around the TB, and it never worried him again. He was lucky in one way. We came down to Kingscliff [a beach town south of Brisbane] for a week or two’s rest. While we were there, Jack discovered the sand mines. He was a very good electrician; he knew all the ins and outs of electricity. So we stayed. We bought this house in the 1950s in which I’m still living. We have three children. Jack died in November 2003. I miss him every night and all day.

I was awarded an OAM for my [community] involvement. I always felt that there were so many things to do. Perhaps it was my nursing training…

I got very involved in the community with a lot of organisations over the years – something like thirty or more – and was a Tweed Shire councillor for nine years. I was awarded an OAM for my involvement. I always felt that there were so many things to do. Perhaps it was my nursing training and also I had the time to help. If anyone asks me where I was born, I say in England but I have spent most of my life in Australia. I became naturalised so I am an Australian.

Since I gave up community work, of course the days are longer and you can feel lonely. But I have good friends and meetings and nice memories. I have some things with me to remember old times, but I use memories more than things. But that powder bowl, it is special to me. I have had it now for all of 64 years.

powder bowl
“My brother gave me that glass bowl for my 21st birthday. It was full of talcum powder, and then there was a little powder puff, and the top. It’s cut glass. That’s what he gave me, which I have always kept.”