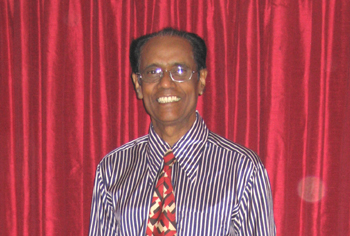 I was born in Puthusserry, Kerala, India and had my university education there. Then I went to British North Borneo, now called Sabah, in Malaysia. I was invited by the Department of Education there to set up a science laboratory and teach in one of the Australian-run schools. I went there for two to three years and was going home to India or to England to do further studies as most Indians would do. What changed my direction was the teachers there; 90% were Australian. They influenced me to come to Sydney which was impossible in those days because of the “White Australia” policy.

I had to produce bank certificates to prove I had enough money to live here and to pay my expenses.

I came as a private full fee-paying student to Sydney University to do a teacher training course. That was in 1963. It was very difficult to get a visa to start with. I had to produce bank certificates to prove I had enough money to live here and to pay my expenses. After supporting letters from Australian colleagues, finally I got this visa just to study and return [to India].

I flew from Sabah to Singapore to Sydney. I wore a suit and a tie, a big flat wide tie. The trousers were wide-bottomed and when I came out here it was different. Because of this I had plenty of attention from people; it was a good way to meet friends! I still keep the outfit so my children can look at it. I’m not going to throw it away, I’ll keep it as memorabilia.

I had a bit of difficulty in understanding the Australian accent. At the airport someone asked me when I arrived. I said, “just today”. She said, “to-die”? I said, “no, I didn’t come to die, I want to live and study!”.

[En route to Sydney] when I looked down from the plane there was a vast city. When I came here I knew nobody. I went straight to the university. I made some friends [there] and they made me feel quite homely. I had a contact in Sabah who arranged my accommodation at the International House run by the Church of England. There all meals were cooked and brought out onto the table. Cooking was another big worry for an Indian, particularly [a] male.

I moved from there to a [Sydney] University college for a short while – it was closer to the University and the library. That was even better, more like a five-star hotel. You had to wear a suit, tie and gown for breakfast, lunch and dinner. And if you were five minutes late they closed the front door; [latecomers] couldn’t go in.

I used to get telegrams from the Immigration Department at the end of every term to report to them within 24 hours. I’d be interviewed and had to produce my [education] results. Fortunately I was passing my courses so I didn’t have to go back [to India]. It was annoying – you didn’t know if you’d be asked to return.

The reply came saying I would be allowed to stay here for a year’s experience; that was an unprecedented case in Australia.

I finished my course in 1964. Getting a job was impossible because I was a student and not a “white man” to be granted a resident visa. The only thing I could think of was going back home. Dr George Mackaness, one of the academics and a famous Australian historian, said, “why don’t you stay here for [a year's] experience?”. He wrote to one of his students who happened to be the Director-General of [the NSW] Education [Department]. The reply came saying I would be allowed to stay here for a year’s experience; that was an unprecedented case in Australia.

So I got a job for one year to teach. There was no vacancy in the city except one school, Enmore Boys High School. I didn’t want to leave the school [but] saw an advertisement for a teachers’ college lecturer. I was called for interview and selected. That was an unusual thing. None of my colleagues could believe that happened – that made it possible for me to stay because my services were needed by the Department of Education. That too was not permanent residence, [it] was just as long as the Department needed me. I was not eligible to apply for permanent residence unless I was here for five years. So I stayed on another year and applied.

It was impossible to get curry powders. We had to get those packed by our parents [who] sent them by air every month.

It was very tough in those days because there were no Indians around. No Asian people, except a few Chinese ones. There was no-one here who could speak Malayalam, my mother tongue, and share the culture with. I remember once walking [around] Circular Quay. Someone was running very fast, he looked like an Indian, a turban-wearing Punjabi, to come and say hello [to me]. It was very exciting to see another Indian around! It was impossible to get curry powders. We had to get those packed by our parents [who] sent them by air every month. There was no Indian restaurant anywhere.

My wife Rose, her house is only about 20 miles away [in India], so we met in Kerala. We got married and came here [in 1969]. We go back [to Kerala] every second year to make sure we keep in touch with relatives and friends.

He was the first Indian to be born [there] in August 1970 – it was front page newspaper coverage!

We have two children. [Our] son, Paul, was born in Wagga Wagga – that’s where I was lecturing at the teachers’ college, which is now a university. He was the first Indian to be born [there] in August 1970 – it was front page newspaper coverage!

Geetha [our daughter] – [her name] simply means “music” – was born in India near my wife’s place. Paul was just over one year at the time, I was lecturing full-time, my wife was pregnant, we didn’t have anyone to help us. My wife was also studying part-time for her post-graduate training as a teacher so it was a very hectic time. We decided to go to India and I came back earlier. My wife stayed on to have the baby.

[Our] language is called Malayalam. Anyone who comes from the state of Kerala would be [a] Malayalee. Our association is called the Malayalee Association of Sydney.

We had the first Malayalee Christmas dinner and get-together in 1975 in Maroubra.

Three [Malayalee] families who lived in [Sydney's] Eastern Suburbs, we decided we would try and find out how many people are from Kerala living here. We took a whole year enquiring, searching for people and finding out their names and addresses, [the] number of children they had. Most were young people aged 25-35. Some were married with very young kids. We had the first Malayalee Christmas dinner and get-together in 1975 in Maroubra at the Uniting Church Hall. Presents were bought for the young kids. We asked them to bring a dish each so we could have a good Kerala-style Christmas party.

We now have over 1,000 families as members. I’ve been elected five times as President and still attend all the functions but do not take an active role because I want to give more opportunity for the younger generation to take lead. It’s very difficult to get young people involved because their interests [are more ingrained] in the local culture. Now I’m more involved in the World Malayalee Council covering about 40 countries, divided into six regions. I’m President of the Far East and Australia region.

The support network was started because of my own experience; I know how hard it is to live without anyone to talk to or seek advice .

For over 20 years I’ve been actively involved in the Ethnic Communities Council of NSW, the peak body of all migrant communities. Currently I’m Vice-Chair. In addition I run a support network in the Randwick area for people who have lost jobs and are middle-aged migrants, particularly if they can’t speak English and are lonely. I’m also involved in the Council of Social Service of NSW as a director so I can draw from them help. The support network was started because of my own experience; I know how hard it is to live without anyone to talk to or seek advice.

I’m also interested in peace. I’m on the council for the Centre for Peace and Conflict Studies at the University of Sydney and have been for 15 years. That centre initiated and established the Sydney Peace Award. Recently I was made an Ambassador for Peace by the Universal Peace Federation.

news cutting
“Paul was born in Calvary Private Hospital in Wagga Wagga. He was the first Indian to be born there in August 1970 – it was front page coverage in the Advertiser, the local paper!”

suit and tie
“I flew to Sydney in 1963. I wore a big, flat, wide tie and the trousers were wide-bottomed. Because of this I had plenty of attention from people – it was a good way to meet friends!”