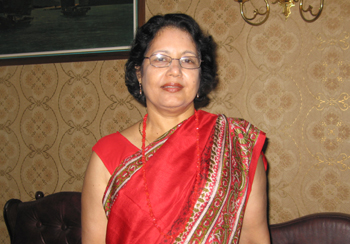 Hotel in George Street, Sydney; then my husband’s flat in Wagga Wagga

I was raised in Kerala [in India] at a place called Pandalam. I went to school and university [there] and got a job as a lecturer at Kerala University. While I was there, my husband, George, came to Kerala [from Australia].

He travelled in my uncle’s taxi and asked the driver if he knew of any suitable girls for him.

Like the custom in India, it was an arranged marriage. He was looking for a bride. He travelled in my uncle’s taxi and asked the driver if he knew of any suitable girls for him. The boy told my uncle and he took my husband to my place. He [George] said, “Australia is the best country, it’s so nice!”. All I knew about Australia is that it’s a country where gold is mined; I heard about Coolgardie and Kalgoorlie. In India people love gold jewellery – so I said, “oh good!”.

My father used to say even when I was one year’s old I wanted to go to America. I was always interested in going overseas. And because I studied English Literature I was reading about English characters, novels and cultures. When Australia came up, I thought well, maybe that’s where God has destined me to go.

I loved India, I love the customs and the relatives, but I probably wanted to broaden my outlook. I thought because I was getting married I wouldn’t be lonely and could always come back to visit my parents. I didn’t feel bad to leave India. I have been going back every second year.

Because of the “White Australia” policy you have to wait for a long time for the visa.

My husband married me [in India in January 1969] and I still have the stainless steel cups and saucers, a wedding gift from a friend. Because of the “White Australia” policy you have to wait for a long time for the visa, about five or six months. To prepare myself to come here my father took me to the best shops so I bought many good saris. I remember he was getting fed up, I took so long! Also spices. I knew there wouldn’t be spices in Australia.

I left in May 1969 from Trivandrum Airport, then got an internal flight to Madras – now Chennai – to Singapore, then Sydney Airport. My husband came there to receive me.

It was mild weather so I could wear my sari. We went to a hotel and stayed there for one day or two. I think it was in George Street in the city. It felt like a big, luxurious hotel.

I was looking for gold on both sides of the road!

Then [we] travelled to Wagga where he was a lecturer. It was a very long journey. My husband was driving. I was looking for gold on both sides of the road! I was missing that Kerala countryside; there is so much greenery and water. Going to Wagga, [the land] was very dry and not much greenery.

We settled in a flat. We lived there for a few months then moved. When my husband was teaching I was sitting at home feeling the cold. We had a gas heater and I was sitting right in front of it.

Paul was born in Wagga in 1970. When I became pregnant again we went to India to have my second child. I was seven or eight months pregnant.

I had to leave Geetha which now I regret, but at that time that was the best thing to do.

After Geetha was born I stayed [at my parents' home in India] for six months. We had some servants so I was very well looked after and comfortable. I had to leave Geetha which now I regret, but at that time that was the best thing to do because in Australia there was nobody to help. So I left them – Paul for one and half years and Geetha for about two. That was very difficult. Because I was studying I could immerse myself in other things. Paul came back [to Australia] with a friend, then I went back to India and brought Geetha over.

First we had a flat near Prince of Wales Hospital in Avoca Street [Randwick, Sydney]. After that we bought a house in South Maroubra.

I think Australians hadn’t seen saris much so they were always looking at me. [Whilst teaching], I remember once the Deputy Principal said [to pupils at assembly], “why are you all turning that way, look this way!” I felt so embarrassed. I gradually changed from saris to western clothes and now I only wear saris for functions.

If an Australian came to Kerala at that time we used to stop and look at them. [At the beach] I was near a girl in a mini skirt and I had a sari on which was long. I sent this picture to India, I was writing about Australia in an Indian newspaper, titled, “In the Land of Mini-Skirted Girls” – the photo was very appropriate for it! 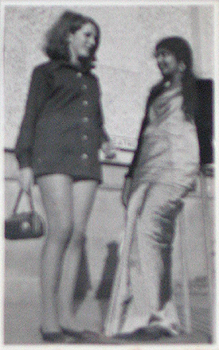 We used to learn Indian classical and folk dances and at meetings we performed them.

We got the Malayalees (Kerala community) together in 1975. They were near, in Maroubra actually. I was on the committee. We used to learn Indian classical and folk dances and at meetings we performed them. We also had special songs from Kerala. We really enjoyed doing that.

I was involved with the church for a leprosy mission, St John’s Church in Maroubra, it was Anglican. We moved away from Maroubra so we went to St Paul’s Church. My children were confirmed there. I was teaching Sunday School [there] but there were more Malayalees so we thought we might have an Indian minister [speaking] Malayalam.

Now we go to the Malayalam Church which is in an Anglican church, Holy Trinity Church [in] Erskineville. I’m on the committee – we are producing a women’s magazine and have an outreach program to the help the poor in Ashfield with the Exodus Foundation.

stainless steel cups and saucers
“They are a wedding gift from a friend – a good memory.”