Football United aspires to “build bridges and help kids … settle more easily into Australia, using football to bring them together with local teams and communities”[1], says Anne Bunde-Birouste about the program she founded in August 2006. Anne is from the School of Public Health and Community Medicine at the University of New South Wales. She believes in the universal language of football and that people’s passion for the game will override any differences.

Football United run programs throughout western Sydney for over 600 young people, aged from 5 to 18 years. The kids are from more than 20 cultural backgrounds, mainly from countries in Africa, South America, South East Asia and the Middle East.

Many of the Football United kids live in Australia because their former homelands are not safe. Since the end of World War Two, more than 680,000 people have arrived in Australia under humanitarian programs. Around 13,000 humanitarian visas were granted during the 2007–2008 migration program[2]. Just under half of these people were defined as refugees[3]. 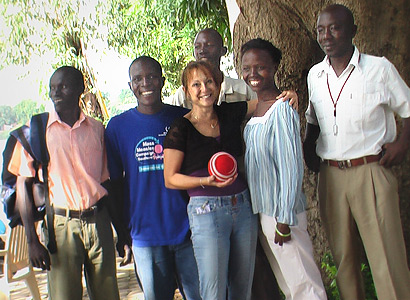 Football United supports the South Sudanese Youth Sports Alliance by providing technical and fundraising assistance. When Anne visited them, “the kids were so excited they gave me the homemade football as a present”.

Refugees are vulnerable in their new countries and are confronted with loss or separation from family, life-threatening events preceding arrival, emotional trauma, differing cultural and societal values and learning new languages. Settlement issues can be harder for young people. Combined with the ‘normal’ challenges every teenager experiences when growing up, refugees can face more difficulties during adolescence.

Taking newly arrived football-mad teenagers and offering them training and playing has demonstrated benefits beyond skill level, teambuilding and improved confidence. Anne says, “Talking to some of the teachers of the Football United kids, I learned that kids have been focussing better in class. One boy was going to leave in Year 10, but since the [Football United] program, has decided to stay in school and go onto higher education.”

The Football United program began in the Liverpool, Parramatta, Auburn, Fairfield and Blacktown areas of Sydney and earlier this year, a national program was launched. All Football United projects are run in partnership with community-based groups such as Police and Community Youth Clubs, migrant resource centres and STARTTS (Service for the Treatment and Rehabilitation of Torture and Trauma Survivors). Also among its supporters is the soccer fraternity at international, national and local levels: FIFA, Football Federation Australia and various A-League teams and players.

As part of its program of activities, Football United offers weekly after-school ball skills courses, vacation training camps, coaching and referee training, family gala days, a mentoring program and ‘Football in the Park’ every Saturday for refugees and local residents. 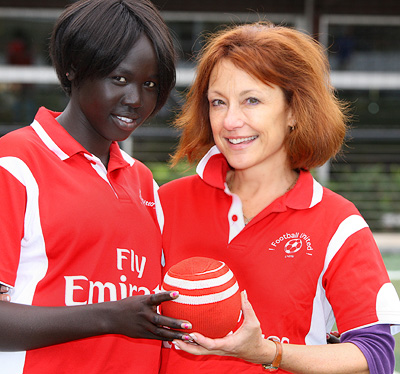 The ball has a football sock on the outside and plastic bags on the inside. In many war-torn regions across the world, footballs are made from whatever materials are around.

Anne and the kids were thrilled Football United was invited to represent Australia in the Football for Hope Festival, an official event of the FIFA World Cup 2010 in South Africa. Mixed teams of teenage boys and girls compete without referees and disagreements on the pitch are resolved through dialogue. The festival will also share the teenagers’ ideas and experiences on how to tackle some of the world’s social issues through football.

The process getting a team to South Africa was intense from the complex application procedure to sourcing additional funds to squad selection. The criteria – which was developed with input from the kids – included playing ability and contribution to the Football United program.

Find out more about Football United »

[3] The United Nations’ 1951 Refugee Convention defines a refugee as a person who has “owing to a well founded fear of being persecuted for reasons of race, religion, nationality, membership of a particular social group or political opinion, is outside his or her country of nationality, and is unable to or, owing to such fear, is unwilling to avail himself of the protection of that country”. www.unhcr.org/pages/49c3646c125.html