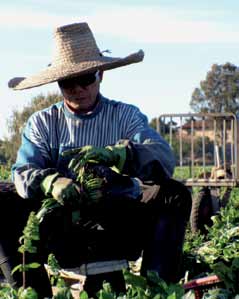 In Sydney the main gardens were established in the sandy soils of the coastal suburbs from Rose Bay to Randwick and through Alexandria, Botany to La Perouse. At the turn of the century there were also gardens at Willoughby and Fairfield, while Chester Hill, Camden, Parramatta and Windsor all had at least one or two gardens.

From the early 19th century the Botany area abounded in market gardens supplying vegetables to the Sydney markets. These gardens had access to unlimited water from the Botany ponds and operated all year round. Until 1859 the gardens were owned and operated by Europeans. After the gold rushes of the 1850s, the Chinese gradually took over most of these gardens. Some Chinese also established laundries in the area. Traditionally the Chinese formed syndicates to lease land and work it to produce crops. This could be quite lucrative, generating up to 50 pounds a year for each partner in a good season.

The fruit and vegetables from the Sydney area gardens provided a sustainable and reliable source of healthy food to a growing urban population. After World War Two the production of vegetables had been taken over by Italian and other migrants who developed market gardens on the outskirts of Sydney. Traditional Chinese market garden areas such as Botany were developed for new housing. Today, only four market gardens remain in the Botany Bay area while the Chester Hill and Willoughby gardens are now local parks.

By the end of World War Two most of the Chinese gardeners had died, returned to China or moved to other occupations. Their gardens have been built on, cleared or abandoned. Labour saving machines, shifting markets and the arrival of Italian farmers who encroached on the Chinese gardeners operations saw most of the Chinese market gardens across NSW fade away. Those that remained were owned and operated by families whose children took over the running of the business. Some Chinese market gardens remain in pockets at La Perouse and Ramsgate in Sydney.