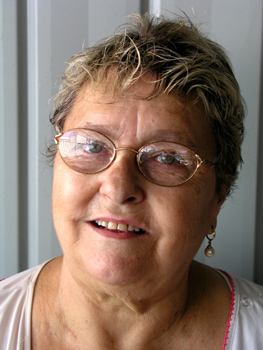 I was a mother and wife while my husband was a security guard at Bonegilla.

I worked at Uncle Ben’s (now Masterfoods) factory; my husband drove the school bus at Bonegilla.

I was born in Trieste, Italy on 27 August 1936. During the war my mother placed me in a Catholic boarding school run by nuns. For me it was terrible, I missed my family. I learnt reading and writing, embroidery and sewing [and] the nuns they make you pray at lot, three, four maybe five times a day!

He was smarter than me, between one kiss and another I fell pregnant.

At the age of 12 I returned home and completed three more years of schooling. After school I worked in a paper factory, binding books. Around the age of 16 I started to go dancing; I adored the dances. It was here that I met my husband, Silvano. I didn’t know about – you know what! He was smarter than me, between one kiss and another I fell pregnant. My father wanted me to live at home and raise the child there but my mother and Silvano wanted me to marry. When Silvano was 21 and I was 17 we married. My friends from the paper factory put some money together and gave us a wedding gift; some saucepans and a colander. I still use the colander everyday in my kitchen.

Silvano wanted to immigrate because he was nearly 22 and did not want to be forced into the Italian army. The memories of the Second World War were still very strong in his mind so Silvano decided it was best to immigrate. I did not want to leave my friends and family, but felt I had no choice.

When we travelled to Australia I was 19 years old. We had a little girl, Laura, and I was expecting Luigi. We left from Italy on 25 August 1955, our ship was called the Aurelia.

…don’t criticise what you see as wrong, there is wrong everywhere and in everybody.

Before I left Italy my mother gave me some advice, she said, “Edda, be honest with everybody and don’t spit on the plate you eat from”. She meant don’t criticise what you see as wrong, there is wrong everywhere and in everybody.

On the Aurelia, it took 29 days to travel to Australia; I spent [all that time] in the infirmary. I was pregnant, looking after myself and the baby [and] I was very seasick. If you are not seasick it’s like a holiday – but I was sick! We arrived in Melbourne on 27 September 1955 and then travelled by train to Bonegilla. We arrived at Bonegilla at 11:30pm [and] it was pouring down with rain.

…everyone was exhausted, but I couldn’t focus on myself. I had to think of our young child…

My first impressions of Bonegilla were no good. We all went into the reception hall and from here we were sent to Block 18. The train ride had been so long – everyone was exhausted, but I couldn’t focus on myself. I had to think of our young child, Laura.

We were at Bonegilla for ten years; it was a very hard life. When we arrived it was nearly all mud roads and we lived in a hut with only two rooms: one cot, two beds, one table, two chairs – very basic. First we were in Block 18, then Block 5, we moved to Block 6 and then Block 19, which was for Bonegilla staff. We were able to live as a family but it was very hard to live there. When I was four months pregnant, I [had] a miscarriage at Bonegilla.

…one night when they served the spaghetti, oh my goodness – it was no good!

There was always plenty of food at Bonegilla, plenty of food for the kids; jam, bread, sausages, mashed potatoes, vegies and mutton but sometimes the taste – yuk. I remember one night when they served the spaghetti, oh my goodness – it was no good!

My husband worked as a security guard on the Bonegilla gate, he did this for nearly ten years. He learnt to drive a car at Bonegilla and a bus for the kids to get to Bonegilla School.

There was no hot water; I used to wash the kids in the copper, where we did the clothes washing.

Then we moved to a rental house behind Cinderella Café at Bonegilla. Cinderella Cafe was about one kilometre from Block 19, we lived there for nearly six years. There was no hot water; I used to wash the kids in the copper, where we did the clothes washing. Eventually, I had a washing machine given to me, not the ones like now but with a roller for wringing out the clothes. We used to have our showers at Block 19, we had hardly any electricity, only one light. If I start to remember, really remember, I cry. 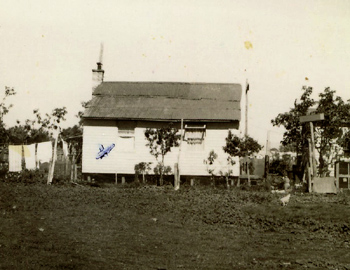 I received a beautiful cutlery set as a wedding gift, before we left Italy. However, after Bonegilla I only have one knife left – you see I lent them all out to other people at Bonegilla and they did not come back. It was a 24 piece set: six knives, spoons, forks and teaspoons. I tried to be generous to everyone; sometimes I wonder where all those cutlery pieces ended up!

There was no money left over to buy any furniture, we still had nothing!

We bought a block of land in Kelly Street, Wodonga in 1957 and gradually paid off the land. Eventually in 1965 we left Cinderella Café and moved into our newly built home. We had two hundred and twelve pounds from my husband’s long service leave and savings. We gave the builders that money and they built our home. We still had to have a loan and our local priest introduced us to the building society. That was the only way we could get a loan. There was no money left over to buy any furniture, we still had nothing!

I learnt English from those around me and attempted to speak English all the time, it was difficult but I thought it was really important for my sake and my family’s sake. I love my children but I was at home with the kids all the time. I was lonely, very lonely.

Silvano went to work at Wodonga Meats. His trade was car upholstery but in Australia he was not allowed to practice. If Silvano wanted to practice his trade he had to move to Melbourne to study again and renew his qualifications, but he needed to work, he needed to support the family.

Laura, our first child, died at 13 in 1967 from hepatitis and diabetic complications. I became very depressed. The doctor advised that I should get pregnant again; you see I was starting to go a little “cuckoo”! So I did and we had two more boys; Bruno and then Steven, after Luigi and Luciano.

…I loved this job and the friends I made, they are still my friends today.

When the children were older, I worked at Uncle Bens for one day a week for three years, I loved this job and the friends I made, they are still my friends today. But Silvano did not want me to work. He said, “When the woman works she forgets her family”. Despite not being able to work, Silvano was always very good to me. Every week he would bring home his pay packet from his work and I would take care of all the household expenses.

I have sons that live close by and I help look after the grandchildren, however, I miss my daughters…

Nadia, my second daughter, died at 31 years of age in 1991 from a car crash, so I lost both my daughters. After 48 years of marriage, Silvano passed away and I miss him dearly. I have sons that live close by and I help look after the grandchildren, however, I miss my daughters – you have a special female bond with a daughter.

My family means everything to me and although my life has often been hard I can still hear the advice that my mother offered many years ago, “Don’t spit on the plate that feeds you”. I live by these words and remind my children to do the same.

colander
“I use this colander every day in my kitchen. It was given as a wedding gift with some saucepans from my friends at the paper factory. They put some money together and came to our wedding.”

knife
“This is the last remaining piece of my cutlery set which I received as a wedding gift before we left Italy. After Bonegilla I only have one knife left now – you see, I lent them out to other people at Bonegilla and they did not come back. It was a 24 piece set: six knives, spoons, forks and teaspoons. Sometimes I wonder where all those cutlery pieces ended up!”