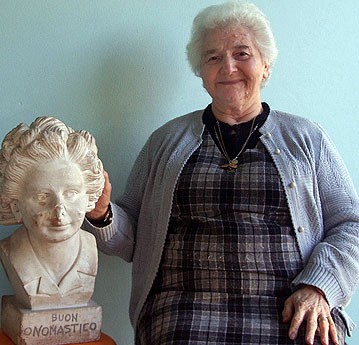 Bonegilla for one month in July 1959

My husband worked as an exposed agggregate and concrete craftsman with Fabro Stone in Botany, Sydney.

My husband set up his own business in marble and exposed aggregate work.

I was born in the village of Olevano Romano near Roma in Italy in 1929. I knew my late husband, Nicola, from when I was a child of 14 – his family’s marble factory was near our home.

For my 19th name day [celebration of the saints day of a person's given name] Nicola made the bust of me.

A few years after the end of the war Nicola and I became boyfriend and girlfriend. Nicola worked in his father’s marble factory – he had marble in his blood, he loved that work. For my 19th name day [celebration of the saints day of a person's given name] Nicola made the bust of me. He first made a clay model from a photo of me and then he took a block of cement and sculpted this bust. He did it just to show he could do it and as a present for me. It says ‘Happy Name Day’ at the bottom [in Italian]. We couldn’t bring the bust with us when we first came to Australia – it was too heavy and big – but it stayed in the family and was shipped out here in about 1983. Nicola just had to have it here he was proud of it even though by this time it had a chipped nose!

On 13 January 1952 we married. We spent our honeymoon near Genoa, Italy – visiting the marble quarries there!

I went to live with my husband’s family but no matter how hard I tried I could not get on with Nicola’s stepmother.

I went to live with my husband’s family but no matter how hard I tried I could not get on with Nicola’s stepmother. After six years of living like this we decided to leave. We had a chance to go to France but Nicola said it was too close, so we paid our 86,000 lira for a passage for Nicola, myself and our three boys to migrate to Australia. We were sponsored by my uncle, Roy, who had a restaurant called Milano’s at Rushcutters Bay in Sydney.

We left Genoa on 25 May 1959. The ship was one of the Flotta Lauro ships called Sydney. It was a rough trip – the food and dishes used to slide from one side of the table to the other and often end up on the floor. Then my son Guglielmo, got the chicken pox and I had to stay in the ship’s hospital with him for most of the trip while Nicola looked after Loreto and Maurilio – our other sons.

We arrived in Melbourne in July and went straight to the hostel at Bonegilla.

We arrived in Melbourne in July and went straight to the hostel at Bonegilla. We had one room and had to queue up for our meals at the dining room. And the food was awful – overcooked pasta with a grey colored sauce. We had no money, we had no way to cook food – some people bought a small furnello – a gas or kero burner and could cook a bit but we couldn’t afford that.

I was very unhappy so I rang my uncle Roy and said “If you don’t get us out of here I will throw myself under a train”.

I was very unhappy so I rang my uncle Roy and said “If you don’t get us out of here I will throw myself under a train”. He arranged for us to go to Sydney and there he gave us a house in Bourke St East Sydney to live in rent-free until we got on our feet. Uncle Roy found Nicola a job with Fabro Stone in Botany doing exposed aggregate and cement work which he did for about a year or so.

Then, one day a man rang him and offered a huge amount of marble…

We moved to Botany in about 1963 just after my fourth son Antonio was born and rented a place on Sir Joseph Banks Street. We were able to buy that place in 1965. Nicola started his own business doing exposed aggregate and cement in the backyard of our home there. Then, one day a man rang him and offered a huge amount of marble. This man had to return to England and needed to get rid of it. He even allowed Nicola to take the marble and pay him through a solicitor later when it was sold. It was like winning the Italian lottery!

Nicola worked hard – seven days a week to keep the family and business going – but like I said, this work was in his blood and he loved it. My life was a very, very lonely life when we first settled here because, my husband was busy with work and I did not speak English and knew no one – it was so hard. But then I did meet a woman at the boys’ school – another mother, Mrs Petta. We became good friends and still see each other. The marble business is still going and my son Laurie (Loreto) runs it since his father died. I miss Italy but our life is here now.

Mrs Elisa Pizzuti died on 11 November 2005, in her mid-seventies. The Migration Heritage Centre is grateful for her recollection which has been recorded in Belongings for posterity.

linen pillowcase
“I hand embroidered the pillowcase for my glory box.”

head and shoulder bust of myself
“The bust was of me when I was 19 years old. It was made by my husband Nicola who was then my boyfriend and he gave it to me as a gift. He was very proud of it. It stands at about 20cm high and is made of hand sculpted cement.”