The Battle of Broken Hill and repercussions for the German Community

On the 1st of January 1915, two men shot dead four people and wounded seven more, before being killed by the Police and Army.

While the attack was apparently politically inspired, as the attackers confessed in notes they left behind, it appears they were not involved in any organised group or militia. Turkey was one of the Central Powers Australia and its Allies were at war with. It was speculated that the two men were Turkish. Later they were identified as Muslims from what is now modern day Afghanistan and Pakistan.

The attackers both former cameleers working at Broken Hill, they were Badsha Mohammed Gool, an ice-cream vendor and Mullah Abdullah, a local imam and halal butcher.

Abdullah had arrived in Broken Hill around 1898 and worked as a cameleer, before becoming a Islamic mullah killing and preparing animals according to halal Islamic law.

Several days before the attack Abdullah was convicted by Chief Sanitary Inspector Brosnan for not having a license to operate an abattoir when he was caught killing sheep at home. Because the Butchers Trade Union had rules that discriminated against non British butchers and the local abattoir had a ‘union only’ employment rule, Abdullah could not legally prepare halal meat for the Muslim community. This, along with harassment over the years, appears the source of the grievance.

Gool was a member of the Afridi, a Pashtun clan, from Afghanistan. The Police believed that Gool had used Abdullah’s resentment of Sanitary Inspector Brosnan and the fines to be involved in the attack.

Each New Year’s Day the local Manchester Unity Order of Oddfellows Club held a picnic at Silverton. On that day in 1915 the train from Broken Hill to Silverton was crowded with 1,200 people on 40 open trucks. Three kilometres out of town, Gool and Abdullah hid on the embankment at the side of the tracks and as the train passed by they opened fire with two rifles. Two passengers were killed and six passengers were wounded.

Gool and Mulla escaped towards the West Cameleers Camp where they lived murdering another person on the way. The Police contacted Lieutenant Resch at the local Army base who despatched the local Militia and an Army Unit to capture them.

When found Gool and Abdullah were found near the Cable Hotel by Police, they shot and wounded Constable Mills, and took shelter in a rocky outcrop known as Cable Hill. A ninety minute gun battle ensued with armed civilians joining the Police, Militia and Army.

James Craig, who was chopping wood 500 meters away during a gun battle was hit by a stray bullet and killed. He was the fourth victim to be killed. 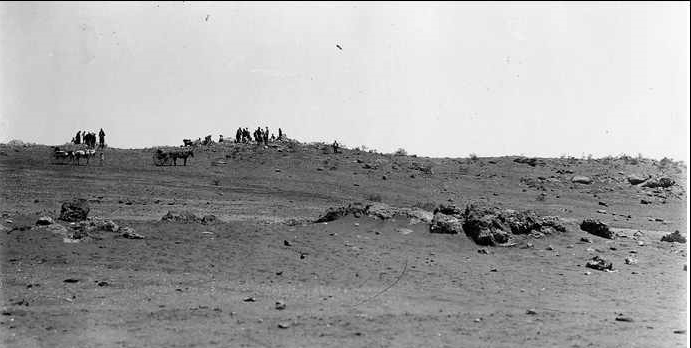 The scene of the gun battle at Cable Hill. Courtesy State Library of South Australia 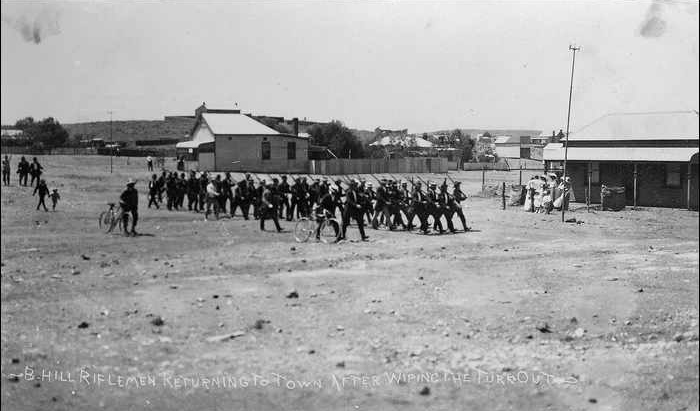 Men marching back to Broken Hill the day after the attack. Courtesy of the State Library of South Australia

After the battle, the scene in Broken Hill was pandemonium and the following night the police were forced to stop a lynch mob from marching on the West Cameleer’s camp.

After this there was no further violence recorded against the Broken Hill Muslim community. Instead, the attack was seen as the result of seditious activities of ‘Enemy Aliens’ and the German community in the area became the focus of mob violence. Believing the Germans had agitated the assailants to attack the train, the local German Club was burnt to ground with the angry mob cutting the hoses of the firemen who came to fight the flames. Once again the police had to break up the mob.

The German Club House in Broken Hill, NSW, was attacked in January 1915. The building had been unoccupied since the outbreak of war. Courtesy of the Broken Hill Historical Society

The next day the mines of Broken Hill fired all employees deemed ‘enemy aliens’ under the 1914 Commonwealth War Precautions Act. Six Austrians, four Germans and one Turk were ordered out of town by the mob. Shortly after prominent members of the Australian German Community were forced to register with police as ‘enemy aliens’ and were interned at Holsworthy Concentration Camp for the duration of the war.