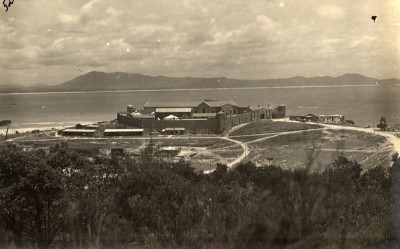 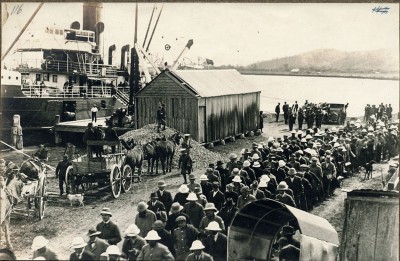 The Trial Bay Gaol was not well prepared for the first internees who were accommodated in tents. Early photos show a number of white tents inside and outside the Gaol walls. Most of the internees were finally accommodated in the cells of the two wings. The interned Consuls and officers were accommodated in wooden barracks that were located between the walls and the main building. Towards the end of 1916, they were moved to wooden barracks on the outside, to the left of the Gaol overlooking Trial Bay. The Australian Government did not provide all the blankets and bedding required until many weeks after the internees arrived. 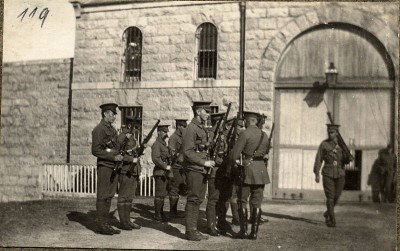 At Trial Bay the internees were under the continuous military guard of 100 men and three officers, c.1916. Dubotzki collection, Germany 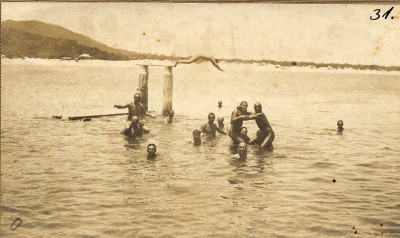 To fill in the day the internees fished, swam, played tennis and walked, often outside the Gaol walls within an area fenced in by wire laid across the peninsula. The gates to the Gaol were opened at 6am and closed at 6pm. At night the internees slept in the unlocked Gaol cells (two per cell), and in wooden barracks built between the walls and cell blocks and in tents on the grounds. Additional huts were erected by the internees outside the walls, and huts were built above the beach for recreational use during the day.

The main building formed the hub of the Trial Bay Camp. In the main building were the kitchens and dining room. The two story cell blocks jutted out at 45 degrees from this. The imposing walls were complete with watch towers and a gate house surrounded the Gaol buildings. The Australian military authorities promoted segregation of the internees according to rank and status. The officers were given separate sleeping, dining and mess rooms in the barracks outside the Gaol. 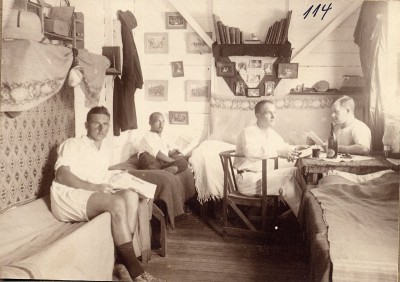 Inside a hut at Trial Bay, c.1915. Dubotzki collection, Germany

At Trial Bay the elite of the German civilian internees were confined. Among them were professionals, academics, businessmen and the German Consuls from New South Wales, Queensland, Tasmania and Western Australia. Many of the internees had lived in British Territories of South East Asia. A remarkable feature of the Trial Bay Camp was its cosmopolitan atmosphere. Pictured are Internees in one of the barracks circa 1915.

Until September 1917, the internees were supplied with the same rations given to Australian soldiers. From September onwards these were reduced to ‘Imperial Rations” based on the rations supplied to Prisoners of War in Britain. The official rations were basic but adequate. However the internees had other sources of food such as vegetables from the internees’ garden and fish caught at the beach and other items sold at the canteen. There was a gourmet restaurant at the Camp named ‘The Duck Coop’ that was run by an entrepreneurial restaurateur. It offered fine food to internees who could afford it.

The activities of the internees transformed Trial Bay into a thriving place for sport and culture. Leisure as well as competitive sporting activities were organised by a number of private clubs. The Turnverein athletics club had the largest membership. The boxing, bowling and chess clubs also drew large crowds. Two choral societies performed German folksongs.

While the freedom allowed to internees created a holiday spirit there was another side to daily life in the Camp. This was the experience of forced confinement and boredom. The shock of life in Gaol cells created a new identity for men who had been removed from their communities and families. Most of the internees experienced feelings of isolation, lack of privacy and monotony.

Causes for friction are popping up everywhere and you have to pull yourself together all the time in order to avoid confrontations. Things get easily out of dimension and people become irritable and touchy due to the long imprisonment. You just can’t avoid it. Some days the mood is following the course of the war, one day there’s high tension and then again one is doomed to wait and wait. 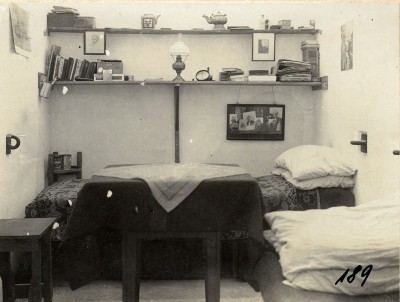 Internee’s quarters in one of the cells, c.1915. Dubotzki collection, Germany

The relations between the internees and the Camp guards were formal and tense. Unlike the men at Berrima who lived in the naval regimentation of Officer and sailors, the Trial Bay internees were more inclined to protest. This generated ongoing conflict between internees and the guards.

In January 1916, the internees went on strike after one described by the guards as an ‘unceasing trouble maker’ was sent to Holsworthy for a minor incident. 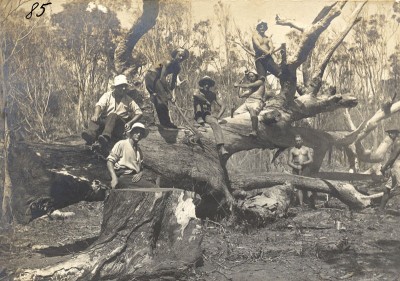 Men who were leaders in business and the professions now fronted up for supervised voluntary work on wages of one shilling for an hour of work of hard manual labour clearing bush or road works. The internees work occupied them dissuaded sedition and protest.

The internees contributed to improved conditions in their Camp by their own efforts and persistence in negotiating with Camp administrators. According to the convention for dealing with prisoners of war the Australian military provided for a committee to be elected to deal with the general welfare of the Camp. A degree of self government was granted to the internees to improve the morale of the Camp and lines of communication were established between the committee and the Camp commandant.

Several subcommittees or Kommissionen were established to oversee education, library, theatre, music, kitchen, bakery, post and the most importantly the canteen.

The Camp Kommissionen ran adult and continuing education programs on science, arts and literature, finance and management. Language courses were held in a separate building called the Berlitz School that included European languages and Chinese and Malay. 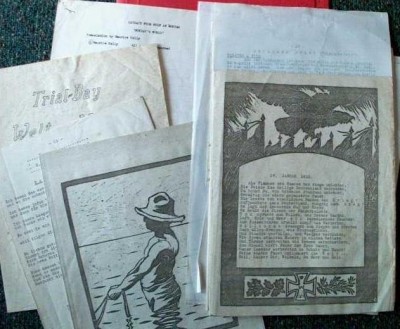 The Camp’s newspaper Welt am Montag (World on Monday) played an important role at Trial Bay and was the only known publication of its kind in Australia at the time free from censorship, which highlights the extraordinary status and special privileges of the Camp. The circulation was by subscription and restricted to the camp. 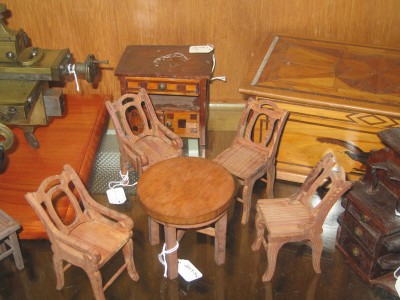 Children’s toys made by internees made in 1916 and 1917, Trial Bay Gaol collection. Photograph Stephen Thompson

Many of the internees made models and toys for the children of internees. The design and manufacture of these artefacts reflects the influence of German artistic and intellectual traditions. 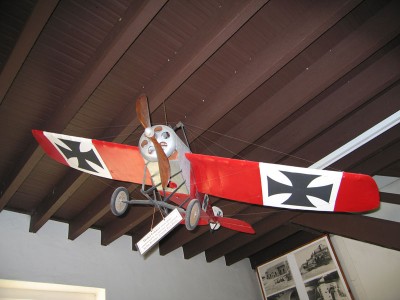 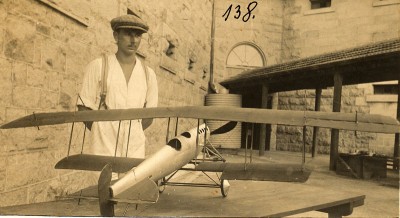 An internee with his model of a bi-plane, c.1916. Dubotzki collection, Germany

The theatre in Trial Bay opened on the 17th August 1916 in a timber barn that seated 280 people. The Camp’s orchestra also performed there. Performances were held on Saturday and Sunday nights. A new play premiered every weekend. The theatre performed 56 plays in 1917. The plays were dramas and comedies to stimulate the intellect and provide a diversion to the daily grind.

The orchestra and music played an important part in the Camp’s social environment. A particular significant performance was Beethoven’s Fifth Symphony in C-Minor. It was seen as a metaphor of the Great War, of Germany’s fate and a hopeful outcome. 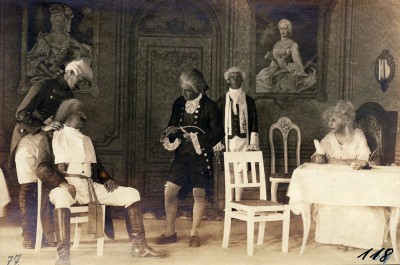 The company had 60 historical costumes and a considerable amount of modern clothing for men and women, all of which was made by the internees. All women’s roles were played by men. Pictured left is R. Lehmann costumed as ‘Kaina in Arms’ and above an example of the costumes & sets made by the Internees 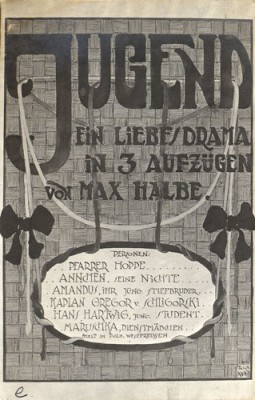 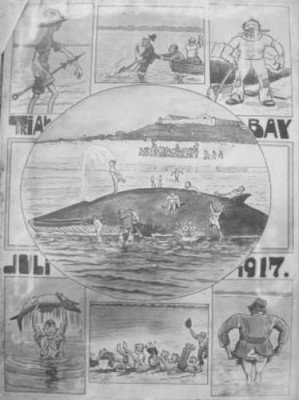 Kurt Wiese who was taken prisoner by the Americans in 1917 went on to become a head of the illustration section of Disney Animation after the War working on features such as Bambi released in 1942 and later illustrated the famous Freddy the Pig series of children’s books. 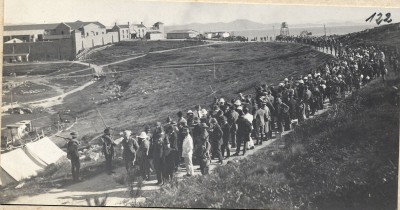 The internees march from the gaol to the wharf at South West Rocks to board a steamer SS Yulgilbar for Sydney, 1918. Dubotzki collection, Germany

The Internment Camp was closed in July 1918 and internees moved to Holsworthy in anticipation of the end of the war and to prepare for the deportation of all internees to Germany. A total of 6,150 internees were deported from Sydney on various ships during 1919. Another reason for the closure of the camp were the persistent rumours that the exposed coastal location made it possible for the internees to make contact with passing German vessels. In 1917 it was reported that internees made radio contact with the German raider S.M.S Wolf which had been in the vicinity. A second report predicted German vessels would again be off the coast in 1918. The Royal Australian Naval Intelligence Service warned that an attempt to rescue the prisoners was considered likely by means of fast sea launches or motor boats. The Royal Australian Naval Intelligence Service recommended that the Camp be closed. This was a reaction to war time hysteria, rumour and gossip. 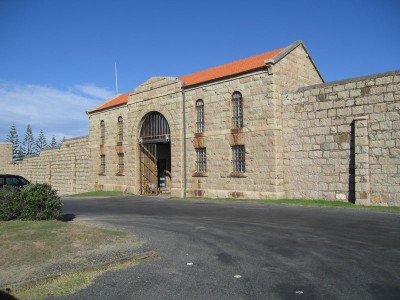 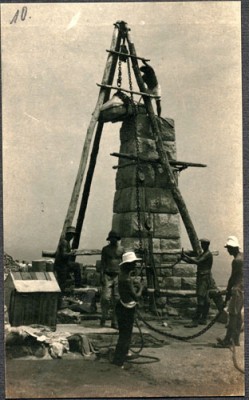 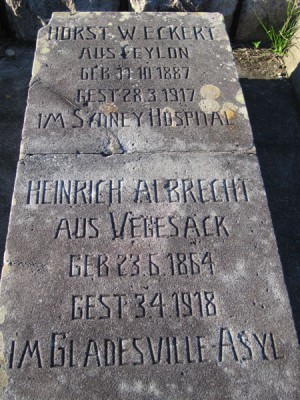 Prior to their departure a stone cairn (monument) had been built by the internees on the hill above Laggers Point in memory of five former comrades who had died during their period of detention. The bodies of three internees, Conrad Peter (1877 – 1917), Herman I.W. Adam (1879 -1915) and Arno Friedrich (1888 – 1917), were buried at the cairn site. It was during the construction of this cairn that the communication with the S.M.S Wolf was said to have occurred. The cairn was destroyed in July 1919, probably by anti German vandals. The monument was rebuilt in 1959 as a gesture of post- World War II goodwill with funds provided by the West German Government and assistance from the Macleay Shire Council and Rotary Club of Kempsey. Two other internees, Hurst Eckert and Heinrich Albrecht, commemorated at the site died at hospitals in Sydney in 1917.