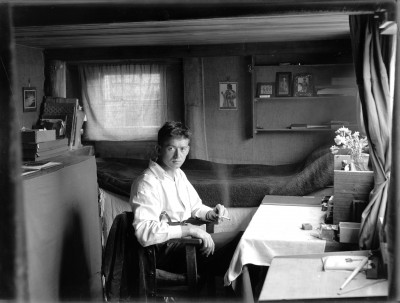 In 1914, Paul Dubotzki left his home in Bavaria to accompany an expedition to Sumatra and China as expedition photographer. The outbreak of World War One took him by surprise in German New Guinea, where he managed to evade being taken as prisoner of war. But curiously it appears he did manage to make his way to Adelaide where in 1915 he was arrested as an ‘enemy alien’ and interned in the South Australian internment camp at Torrens Island before being transferred to the camps at Holsworthy and Trial Bay Gaol in New South Wales.

Throughout his time as an internee, Paul took photographs and ran a commercial photographic studio within the camps selling photos that recorded the internment experience for internees and guards alike. In 2007, 87 years after the final repatriation of internees back to Germany, Paul’s remarkable collection was discovered by NSW Migration Heritage Centre researcher Nadine Helmi in the safe keeping of his two elderly daughters in the small town of Dorfen, Germany. 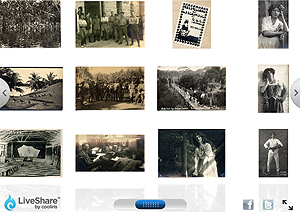 Paul Dubotzki was born in 1891 in Ingolstadt, Bavaria. He grew up in an expanding German Empire as an apprentice photographer in Passau and Seeshaupt. At 22 he joined an expedition to China and Sumatra as official photographer.

Dubotzki travelled through Malaysia, Burma and Singapore documenting the places as expedition artists had done a century before. As fate dictates he was in German New Guinea at the outbreak of the World War One. His photographs show indigenous policemen gathering with German reservists in the jungle of New Guinea to repulse the anticipated Australian invasion. 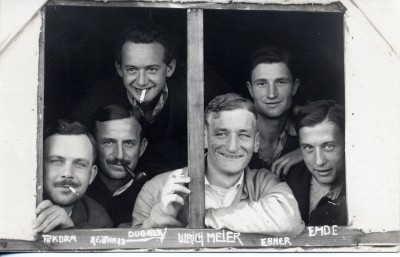 Paul Dubotzki (top left) and some fellow inmates look out of a makeshift hut on Torrens Island, 1915. Dubotzki collection, Germany

Dubotzki was not among the prisoners transported to Australia after the surrender of German New Guinea. But he did manage to make his way to Adelaide where in 1915 he was arrested as an ‘enemy alien’ and interned in the South Australian internment camp at Torrens Island.

After his arrest Dubotzki recorded his life in internment. His photographs show in beautiful detail the diverse camp community and culture that developed around him. With his equipment he was able to earn a basic income from photography making postcards and mementos.

Dubotzki’s first pictures of Torrens Island camp captured the camp’s appalling conditions and the abuse committed by Australian guards. His photographs were submitted as evidence in official protests and a Defence Department inquiry.

Dubotzki was transferred to the main German Concentration Camp at Holsworthy near Liverpool in New South Wales on 19 August 1915 and a few months later transferred to the Trial Bay camp, the privileged camp on the New South Wales north coast. His time at Trial Bay was one of intense creativity where he not only worked at his photography, but also discovered a talent and interest for art and acting.

Dubotzki left Trial Bay when it was closed in 1918 and spent the remainder of the war at Holsworthy. He was repatriated to Germany in 1919.

When Dubotzki returned home he found a Germany broken by its imperialistic ambitions with record unemployment, inflation, social unrest and poverty. In the six years that he had been away, the Germany that he knew had ceased to exist with millions of lives lost; the Kaiser overthrown, its proud naval fleet destroyed and its extensive colonial territories confiscated.

Despite this Dubotzki, like many, succeeded in building a new life for himself. Back in Dorfen he opened a photographic business, got married, fathered three children and started a second career as a painter. He combined commercial photography with more artistic work. His images of the Bavarian landscape and Bavarian villagers survive as postcards.

World War One disrupted Dubotzki’s life with an adventurous segue, but World War Two devastated his family taking his only son. Again after another world war he resumed his work as a photographer and painter, now selling his Bavarian landscape paintings to American soldiers occupying the Southwest of Germany.

He died in 1962, a well-known member of the local business community and respected as a photographer and painter. His old studio in Dorfen next to his surviving daughter’s house, still contains the hundreds of photos and many oil paintings that are his artistic legacy, while his grandchildren care for his cameras that testify to a life devoted to photography.