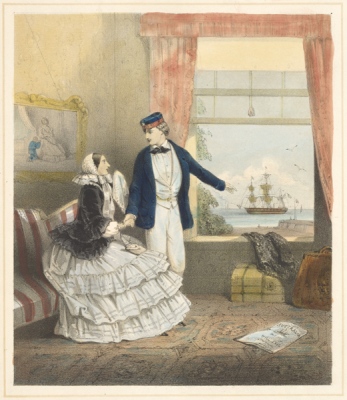 From 1815 the Colonial Government decided to promote the migration of free settlers and limit squatter land leases to 14 years. This was to create an emancipist consumer economy and improve the moral tone of the colony. The Colonial Government assisted some migrants by paying their fare to Australia and helped to set up farms and businesses alongside the wealthy squatters – who of course were not very happy with such competition.

With increasing numbers of free migrants and the desire of colonial society to be free of the hated convict stain, the Colonial Government decided to cease transportation to New South Wales in 1852. Between 1788 and 1868 approximately 160,000 convicts were sent to Australia.

The constant flow of immigrants through the 19th century had a cumulative effect on the Australian colonies. Europe and especially Britain was in the midst of the most profound scientific, industrial and political changes which were transforming the civilised world. The immigrants brought with them the first hand knowledge of these sweeping changes. In every conceivable way they speeded up Australian development, so that a nation which could have easily have remained a remote backwater was often the forefront of the Victorian progress. Even though they became ‘Australian’ the immigrants were constantly looking at developments at home and as soon innovation was made demanded ‘Why can’t that be done here too?’ In turn their new country gave something back even to the most humble migrant.

Despite attempts to supplant the English class system in Australia by the elites, a person was valued for what they could achieve with their own hands. Newcomers were astonished to find that even the Irish, regarded in England as the lowest form of humanity, could become respected members of the community.

A democracy of ‘honest sweat’ had begun to build the tradition of the ‘fair go’ in 19th century Australia.

Governor Bourke's 1835 Proclamation of Terra Nullius
The Proclamation of Governor Bourke, 10 October 1835 is historically significant. It implemented the doctrine of terra nullius upon which British settlement of New Holland was based. National Archives of the United Kingdom, Kew, Richmond, Surrey, U.K.
more details »

1830 Convict Work Clothes Button
Discover the brass button from the work clothes of a convict assigned to the Australian Agricultural Company at Newcastle in the 1830s.
more details »

1838 Liverpool Wheat Sheaf Gatepost
Discover the sandstone sculptured wheat sheaf from Macquarie Fields House near Liverpool that was built by Samuel Terry in 1838.
more details »
View other objects from this era »