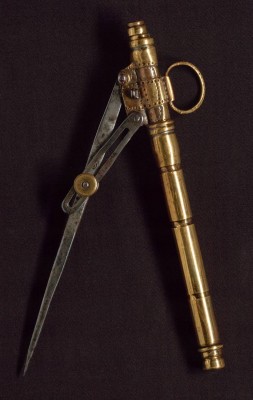 Compass thought to have belonged to William Dampier. Courtesy National Library of Australia

Object Description
A set of mariners compass thought to have belong to British Explorer William Dampier. The compass is made from brass with the inscription Poncet 9 on the barrel. It was manufactured c1650s. Dimensions 217mm long. 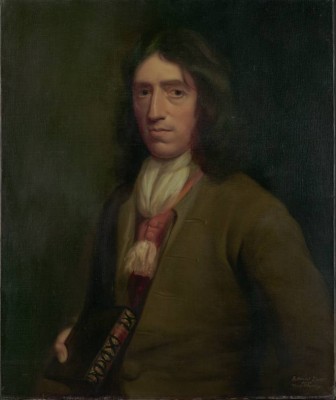 The first Englishman to document New Holland was buccaneer William Dampier. Dampier had become a sailor in his teens and in 1688 he joined Caption Swan’s pirate ship the Cygnet which marauded the Pacific for most of 1688- 1689.

Early in 1688 Cygnet was beached on the northwest coast of Australia, near King Sound. While the ship was being careened Dampier made notes on the fauna and flora and the indigenous peoples he found there.

Dampier published a book titled A Voyage Around the World which recorded his exploits and the places he visited including North West Australia. The book became a sensation.

This tweaked the interest of the British Admiralty who in 1699 gave him a commission and command of the Roebuckto explore the east coast of New Holland. The ship was old and leaky and the crew rebellious who threatened to mutiny. Dampier managed to reach New Holland where he explored the North West coast of Australia and a part of New Guinea.

Like the Dutch, Dampier was not impressed with what he saw of Australia. Dampier wrote:

New Holland is a very large Tract of Land… I am uncertain that it joins neither to Asia, Africa, nor America…

The land is … dry Sandy soil destitute of Water… the Woods are not thick nor the Trees very big… We saw no sort of Animal, nor any Track of Beast, but once, and that seemed to be the Tread of Beast as big as a great Mastiff Dog…

The inhabitants of this Country are the miserablest People in the world… They differ but little from Brutes… The have great Heads, round Foreheads and great Browls. Their Eye-lids are half closed to keep the Flies out of their Eyes.

They have Bottle Noses, pretty full lips and wide Mouths. The two Fore teeth of their Upper Jaw are wanting in all of them… Instead of Clothes they have a piece of rind of a Tree tied like a girdle about their waists.

They have no Houses, but lie in the open air without any covering, the Earth being their bed… They live in Companies – twenty or thirty Men, Women and Children together… GMH.

Dampier was forced to abandon his plan to examine the east coast of New Holland while less than a hundred miles from the coast. With the ship falling apart and the crew on the verge of mutiny Dampier sailed for England. The Roebuck sank at Ascension Island on 21 February 1701. While anchored offshore the ship had started to take water. The ships carpenter was sent below to make repairs, but he only made it worse and the ship was run ashore.

While many of his papers were lost with the Roebuck, Dampier was able to save many new charts of coastlines and his record of trade winds and currents in the seas around Australia and New Guinea. He also saved a few of his scientific specimens.

On his return Dampier was court-martialled for cruelty. During the voyage Dampier had crewman George Fisher jailed in Brazil. Fisher returned to England and complained to the Admiralty. Dampier wrote an angry vindication of his conduct, but was found guilty. As a penalty Dampier was docked his pay for the voyage and dismissed from the Royal Navy.

He wrote an account of the 1699–1701 expedition titled A Voyage to New Holland and returned to privateering.

The compass is a significant object in the history of modern Australia. Dampier paved the way for the great British expeditions of the Pacific. Innovations Dampier made in navigation technology were studied by James Cook and his notes on the fauna and flora of North Western Australia were studied by naturalist and scientist Joseph Banks, who made further studies during the first voyage with Captain James Cook. This helped lead to the identification of Botany Bay for the new British colony and the founding of modern Australia.