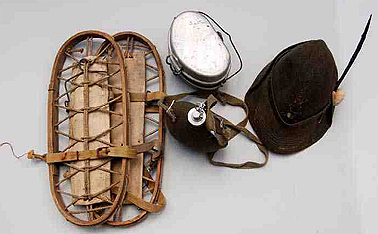 Object Description
1. Khaki green felt hat, peaked crown, shallow brim with leather strap. At front is an embroidered eagle with no 7 in the middle. On the side, tucked into the strap, are two feathers, one small black and white and one large black. White pom pom. Very fragile.

2. Mess kit. Four piece kit comprising two flat pans, one pot and a mug. Manufactured of aluminium. All pieces fit together and lock in place. Some interior staining.

4. Snow shoes. 1 x pair, timber frame with rope woven from frame to canvas base of shoe. Back strap for heel and adjustable tow strap with buckle at base, 44 cm long x 17 cm wide. Medals and certificates.

5. Assortment of memorabilia collected by the Griffith Alpini Association.

Most of the Alpini kit was issued to Pietro Beltrame whilst doing his national service training in the Alpini corps, 1953. The hat was given to Pietro Beltrame by an Italian man who fought in Tobruk during one of Pietro’s return visits to Italy. Pietro passed on the hat to Mario Vardanega, long standing president of the Griffith Alpini group.

The snowshoes, mess kit and water bottle were issued to Pietro Beltrame whilst doing his national Service training in the Alpini corps, 1953. These items, except for the cap, were brought to Australia in 1956 when Pietro immigrated (Frank Peroson pers. Comm. Nov. 2007).i

Pietro Beltrame was born January 1931 Tarcento, provenance Udine in the Friulu region the immigrated to Australia in 1956. He came to Griffith and stayed with relatives, a boiler maker by trade Pietro secured employment with engineering firm ‘Gilbros’ in Benerembah Street. after a few years he and several other Italian men left Griffith and began work on the Snowy mountains scheme, a lot of new Italian migrants did this, the pay was good which if managed well, gave the young men a good start to life in Australia. After a few years he came back to Griffith and went back to work at Gilbros. Pietro met his future wife in Leeton and in 1962 married Aileen Tyrrel. They had two girls. Pietro’s wife Aileen, said Pietro was passionate about his Italian heritage and Alpini connection. Once whilst visiting Sydney he found an Alpini hat, covered in paint and lying in the gutter. This upset him terribly, he found it very disrespectful, he picked up the hat, brought it home had it dry-cleaned. (The hat remains with the family). Pietro was a man who enjoyed life and working for the betterment of the community. Pietro died 2nd August 1997 (Interview with Aileen Beltrame Nov 07).

The number 7 on this hat identifies the regiment. The colour of the pom pom identifies the battalion. These were the colours of the Italian flag, red green and white. The pom pom had a number that indicates the company. The feather, from the mountain eagle, led the Alpini to being nicknamed “le Penne Nere” or ‘black feathers”. 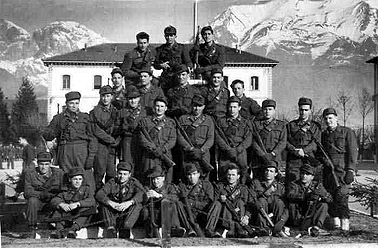 The Alpini Corps were a distinctive outfit of soldiers who were trained specifically for the protection and defence of the regions of northern Italy. National service training went for one and a half years during which time trained extensively in how to survive in the European Alps.

The first 15 Alpini companies were formed in 1872, at the suggestion of Giuseppe Perrucchetti, as a force capable of defending Italy’s northern mountainous borders newly created Kingdom of Italy, with its new capital in Rome, faced major problems in defending its new land borders, which after the 1866 war against Austria, were coincident with the Alps. In 1877, five artillery Batteries were formed and by 1882 they consisted of 20 Alpini battalions, 8 Alpini Mountain artillery which were organized into six regiments and two Alpini artillery brigades. the battalions took the names of the valleys and localities from which their soldiers were recruited. 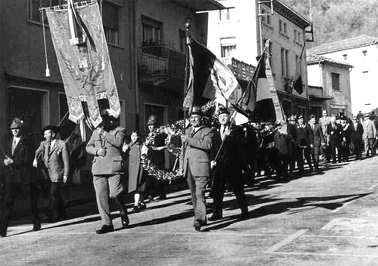 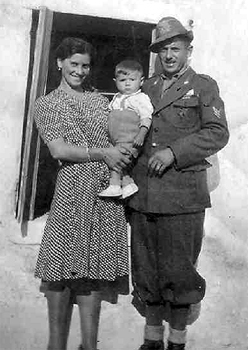 During WWI, 24 peacetime Alpini battalions were increased by 64 battalion and saw heavy combat all over the alpine area. After WW1, most battalions were dissolved, although a 9th regiment was formed. During WW11, the division saw combat in France, Albania, Yugoslavia and Greece.

The Alpini Association is one of the largest ex-servicemen organisations in Italy and throughout the world, with some 300,000 members and 20,000 friends or supporters of the Alpini, divided in 4,000 Gruppi and 200 Sezione, of which nine are in Australia. The first President of the Griffith Section of the Alpini was Pietro Berton (Sergente) followed by Tony Dal Bon and current President Mario Vardanega who has been serving for over 20 years.

A number of ex-servicemen from these Corps arrived in Australia as migrants in the 1950′s and with much effort and hard work, firmly established themselves in Griffith. 30 years ago a busload of Alpini arrived unannounced from Adelaide. They asked about Alpini in Griffith, which resulted in a meeting with some of the local members of this Corps. This was the beginning of the Alpini Association in Griffith. A large reception was organised, where over 100 people attended a gala dinner. The Adelaide leaders held a meeting with a small group of the locals and volunteered to sponsor the formation of a Griffith Alpini Group. When this was announced at the end of the function, one of the Griffith group accepted the offer on behalf of more than twenty Alpini who were present.

Local activities began in earnest with much enthusiasm, in accordance with the Alpini constitution – to foster the camaraderie of the military service of past years with friendship, mutual support and worthy civil activities. The association aims to keep alive the spirit and values of the Alpini Corps through its members throughout the world.

The Griffith section of the Associazione Nazionale Alpini this year are celebrating the 30th Anniversary of their foundation. Among the 260 people who attended the gala Luncheon held at the CCY on 26th June were a number of civil and religious dignitaries. 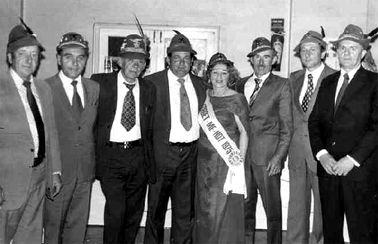 President of the Griffith Section, Mario Vardanega illustrated the various activities carried out by the Griffith section during the past 30 years.

The Alpini Association is one of the largest ex-servicemen organizations in Italy and throughout the world, with some 300,000 members and 20,000 friends or supporters of the Alpini, divided in 4,000 Gruppi and 200 Sezioni, of which 9 are in Australia.

First President of the Griffith Section of the Alpini was Pietro Berton (Sergente) followed by Tony Dal Bon and current President Mario Vardanega who has been serving for over 20 years.

The recorded history of the Griffith Alpini shows abundantly that they have maintained mutually beneficial and strong friendships, with frequent and regular meetings and social activities, and valuable community support supplying both manpower and financial assistance wherever needed. Among the local organizations who have benefited from these activities in the past 30 years are Griffith Hospital, Pioneer Nursing Home, Schools, Scalabrini Nursing Home, the Library, Museum, and charities such as Cancer support Groups and the Heart Foundation. Over $100,000 has been donated by the Alpini from funds raised at functions held by this Group in Griffith.

There have been many bus or plane trips organised by the Griffith Alpini – each year they organise a bus trip to the annual re-union of the Australian Alpini groups which is held at a different location every time. In 1989, the annual function was held in Griffith, attended by military personnel from Italy and Australia, diplomats and RSL, clergy and local authorities. Busloads of members and friends travelled to Griffith for the occasion, which was attended by a vast number of locals who all agreed that it was a notable event and a great success.

In the past, most of the functions were organised and carried out by purely voluntary work of the Alpini members and their supporters. Much gratitude must go to the local business houses in Griffith who never failed to provide support for these functions in donating goods for both the BBQ’s and raffle prizes. This enabled the proceeds from the functions to be directed to the needy causes in our community.

The Griffith Alpini built a unique BBQ shelter at Lake Wyangan with voluntary labour, and to this day provide the manpower for its maintenance. It is available all year round for the use of the entire community, free of charge.

Over the years, the many members of the Griffith Section have thinned out- deaths, old age and disabilities have limited their activities. New Alpini have stopped coming since the 1960s, so no new members are available. However, the “old boys” continue to carry on, with help from friends and supporters.

The present committee in Griffith is continuing the activities, despite reduced numbers. President Mario Vardanega, Vice President Italo Codemo, Treasurer Ricco Merlo and Secretary Tony Zorzanello head a committee of devoted members who plan to continue their mission as long as they are able. The people of Griffith have strongly supported the Alpini association’s charity activities and fund raising for charities.

This army kit is of historic significance as the evidence of a strong emotional bond with the Alpini army corps. The kit is not simply a utilitarian collection of military paraphernalia. The feathered Alpini cap is a decorative part of the kit, while the snow shoes have a rustic quality with aesthetic value in their own right.

This collection of items has some research significance for the study of military traditions. The collection has potential for oral history research with Alpini veterans as a primary source.

The preservation of items, such as the snow shoes, long after their utilitarian function has ceased, is evidence of a high symbolic value placed by former Alpini on their items of equipment.

The history and provenance of this Alpini army kit is well established.

The kit is highly representative of a typical Alpini army kit, and an example of military memorabilia carried by migrants into their new homeland.

Individual items of military memorabilia are not generally rare, however the kit as a whole, is locally rare.

These items have been kept in good condition.

This collection has interpretive potential as an example of a military memorabilia, because of its completeness.