Object/Collection Description
Fawn Linen banner with brown cotton backing. It has seven bone hanging rings at the top. It is hand-embroidered with two crossed flags. The left flag represents the banner of the city of Hamburg. The right flag is that of the German Australian Line that translates into German as Deutsch Australische Dampfschiffs Gesellschaft (known by the initials D.A.D.G.). The embroiderer has cleverly played with this and combined this banner with ‘Durch Arbeit Der Gewinn’ which translates as ‘Through Work the Reward’. This banner was hung in the mess area of Berrima Gaol for the interned crews of ships belonging to the German-Australian Line. Dimensions: 1110 mm wide x 700 mm high.

The outbreak of fighting in Europe in August 1914 immediately brought Australia into the ‘Great War’. Within one week of the declaration of war, all German subjects in Australia were declared ‘enemy aliens’ and were required to report to the government. In February 1915 enemy aliens were interned either voluntarily or on an enforced basis. In NSW the principal place of internment was the Holsworthy Military Camp where between 4000 and 5000 men were detained. Women and children of German and Austrian descent, detained by the British in Asia, were interned first at Bourke and later at Molonglo, near Canberra. Former gaols were also used. Men were interned at Berrima Gaol (constructed 1840s) and Trial Bay Gaol (constructed 1889). At these camps the internees organised themselves into arts and craft societies and organised large German events and festivals to pass their time and to retain a sense of identity.

Camp authorities allowed the internees a large degree of freedom and self-organisation. The majority were crews from German merchant ships captured in Australian ports at the outbreak of war such as the Altona, Pfalz, Elass, Berlin, Prinz Sigismund, Hobart, Tiberius, Turul and Germania. The seized vessels were from the German shipping companies operating in Australian waters. 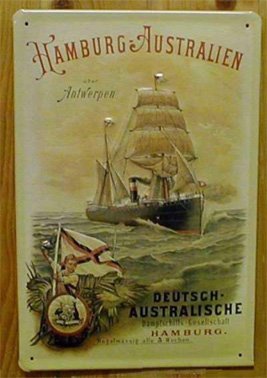 The most prominent companies were the North German-Lloyd (NGL), the German Steamship Company (HANSA) and the Deutsche-Australische Dampfschiffs Gesellschaft (D.A.D.G. or German-Australian Line). D.A.D.G was formed in 1888 to operate services from Hamburg via Antwerp and the Cape to Adelaide, Melbourne and Sydney. The service commenced in July 1889, but, within a couple of years, passenger services to Australia were discontinued and the company restricted its activities to the cargo trade to Australia and the Dutch East Indies and later to North and South America. It was taken over by the Hamburg-America Line in 1926 and ceased operating as a separate identity.1

Later, there were prisoners of war from German colonies and bases in the Pacific as well as the crew from the German light cruiser SMS Emden, sunk off the West Australian coast by the Australian cruiser HMAS Sydney in 1914. The regimented and structured nature of mercantile culture resulted in the Berrima internees being largely self-regulating and self-managing. The banner is evidence of this. Many of the crew of these vessels had plans to emigrate after the mercantile service.

The internees also found a welcoming community because some of the families in the area were descended from German settlers who came to the district in the 1840s. Despite the anti-German diatribes from mainstream media, the Berrima residents warmed to the internees who purchased bread and meat from local shops (Australian newspapers were banned, and internees preferred to get their newspapers from neutral countries) and rented houses for their private use, thus bolstering the local economy. In turn the internees helped local residents to rescue animals, fight bushfires and deal with unwanted snakes in the house. 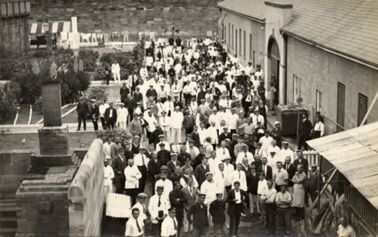 Simmons notes that ‘there were certainly guardsmen who … came to respect the industry and abilities of their charges and to be friendly towards them’. The daughter of Sergeant Bennetts, a private in the Berrima Guard, tells that a ‘Sincere respect existed’ between guard and internee and when he had to escort an internee home for a serious crisis, without exception the guard was made welcome in the internee’s family home.2

Like the internees of Trial Bay, this activity provided a distraction to camp life and reinforced a sense of their own cultural identity. But, unlike the internees at Trial Bay – who considered themselves among the top 500 of the German elite in New South Wales – the Berrima internees were seamen, some of whom had served time on windjammer clippers. They were used to long periods away from home and music was very much a group activity they appreciated.

The banner is historically significant as evidence of the experience of the German internees’ life at Berrima Gaol, their attitudes to the war and internment, and their relationships to other German Australian communities across Australia

The banner provides a research tool for historians to explore the First World War chapter of Australian history and gives the story a wider meaning in the context of the history of migration and settlement. The material culture of the Berrima Internee Collection reveals the diverse skills and backgrounds of the people interned there, including their educational and cultural background. Members of the Berrima internee community included ships officers, engineers, navigators and merchant seamen. 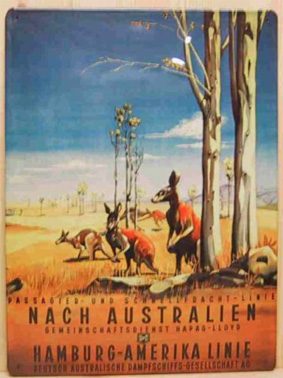 The banner has substantial intangible significance as material culture and fabric of a site associated with internment. Internees’ and guards’ families have a common link to the place. Many local residents, including collectors and amateur historians, have developed a similar attachment, researching and documenting the history of the site and the collection. A lot of information still resides in the memories of the Berrima community. The place is a focal point for both Australians of German descent and visiting German nationals.

The banner’s provenance is strong. Now on display in the Berrima Museum, it was donated by Jorg Ludekin, son of August Ludekin, an internee at Berrima. It was presented to the Berrima Museum by Gerhard Danneman who travelled from Germany for the launch of Prisoners in Arcady in September 1999.

The Berrima Internee Collection is rare in that it relates specifically to the German internee occupation of the site and is associated with those particular people who emerge as significant participants in World War I New South Wales internment camp history.

The banner represents the mercantile culture and traditions of the German internees. It bears the record of the ships Wilhelm Koster served before internment in 1915. This object shows a strong eye for accuracy and detail and symbolises the German internees’ patriotism and defiance. The banner, as part of a larger collection, represents the German experience in Australia during World War 1 and Australia’s fear of subversion and racial antagonism to cultural minorities in wartime. The collection represents Australia’s strong historic links to Britain, the adherence to British foreign policy after Federation and a time when Australia held deep suspicions of non-British immigrants.

The banner’s importance lies in its potential to interpret the place as a site associated to internment, the internment camp itself and the experience of German communities. The collection presents the opportunity to interpret the stories of people interned at Berrima Gaol who returned to Germany after the War only to return as immigrants and become successful members of the Australian community despite their experiences.