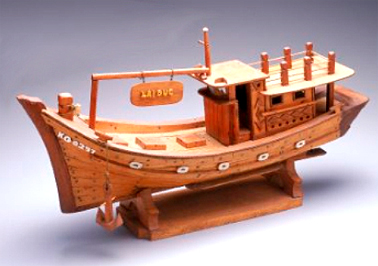 Object/Collection Description
The Model fishing boat named Kie Gang Kg 02979, is the type used by fishermen who worked the coastal waters off Vietnam. It was made by Lai Duc from wood, glass, twine and metal at Lai Duc at the Camp Pu Lau Bi Dong, an island refugee camp in Malaysia in the 1980s. The model is the single hull fishing boat stern wheel house and cabin type in which ‘the boat people’ made their escape from Vietnam. The model was made from salvaged wood. It features a keel mounted blue metal propeller, a wooden anchor secured by green twine and a foremast boom is suspended a sign with the name of the maker on one side and the migrant camp on the other. Other inscriptions are Kie Gang and KG 02979 which refer to the makers’ town of origin, Kieng Gang (Kian An, North Vietnam). The stand is of the same wood, with a flat base and two upright cradles. There is also a detached rudder, hatch cover and a letter from the stern inscription. Dimensions: 353mm high X 170mm wide.

Vietnam has been invaded many times. In the nineteenth century it became part of France’s empire in South-East Asia. During World War Two, Vietnam was invaded by Japan. Supported by the United States, Vietnamese leader Ho Chi Minh led guerrilla fighters in attacks against the Japanese. In 1945 Japan was defeated and Ho Chi Minh declared Vietnam’s independence from France.

France did not want to relinquish its colony and sent troops to quell the independence movement. This guerrilla war lasted for almost ten years until Vietnamese guerrillas defeated the French troops at the battle of Dien Bien Phu in 1954.

The model was made by Lai Duc from the town of Kieng Giang or Kian An in North Vietnam c.1980, while awaiting entry to Australia on Pulau Bidong Island, a Malaysian refugee camp. Through the early 1990s this model was on display in the offices of the Indo-China Refugee Association.

The Model has historic value for its association with a key phase of Australia’s migration history. These were Australia’s first ‘boat people’ whose arrival and acceptance both reflected the dismantling of the White Australia Policy and encouraged further reforms. While only 2,000 of Australia’s 200,000 strong Vietnamese population arrived by boat, escape by sea remains the defining narrative of the Vietnamese experience.

The model has intangible significance to the descendants of Vietnamese refugees as a means of understanding their family’s migration experience and their homeland’s history. Its acquisition by a national institution is a compelling validation of these refugee voyages and experiences.

The model represents a particularly Australian perspective on a global story, one which continues to capture international attention. This story encompasses a range of issues that include social justice, political and religious freedom, the new Australia and its place in the global village and in particular its relationship with Asia. The model can be used to explore the experiences of all those who have taken great risks to escape oppression, and in particular those who embarked on the perilous sea voyages as boat people in the aftermath of the Vietnam War.

The model is a rare example in a public institution of a model made in a refugee camp in Malaysia and its detailed construction suggests a long wait to come to Australia and craft to relieve boredom.

Historically, Australian migration policy has always been directed at restricting non Europeans whether they are Chinese diggers heading for the gold fields, South Sea Islanders recruited for the cane fields, or refugees from the Middle East, central Asia, Indochina or Japan. The model is significant for its symbolic analysis of and present immigration debates. By locating the vessel’s passengers, it also helps humanise and amplify the experience of all asylum seekers.

The model is well provenanced from its construction by Lai Duc. Through the early 1990s this model was on display in the offices of Indo Chinese Refugee Association who donated it to the Powerhouse Museum in the mid 1990s.

The interpretive potential of the model is substantial as evidence of the experience of Vietnamese refugees escaping their homeland and the years they endured in refugee camps in Malaysia waiting to come to Australia.