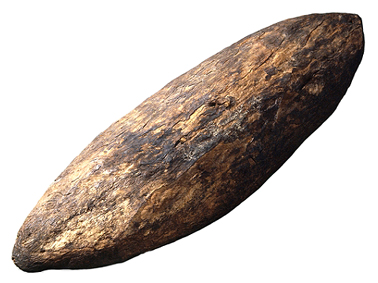 Object Description
This bark shield was collected in 1770 on Captain Cook’s First Voyage in HMS Endeavour (1768-71). It is the only indigenous Australian artefact in the British Museum that has been provenanced to the voyages. It is made from wood and bark. Dimensions: 1000 mm long X 450 mm wide.

James Cook made three voyages to the South Pacific between 1768 and 1779.

Cook’s first expedition on board HMS Endeavour was to proceed to Tahiti to assist in the scientific observation of the transit of the planet Venus and then as instructed, sailed south in search of the fabled ‘Great Southern Continent’.

Cook’s Instructions provided that, in the event that he found the Continent, he should chart its coasts, obtain information about its people, cultivate their friendship and alliance, and annex any convenient trading posts in the King’s name. Cook followed the coast of New Zealand (thereby debunking Abel Tasman’s theory that it formed part of the southern continent), then turned west, reaching the southern coast of New South Wales on 20 April 1770. He sailed north, landing at Botany Bay one week later, before continuing to chart the Australian coast all the way north to the tip of Queensland. There, on Possession Island, just before sunset on Wednesday 22 August 1770, he declared the coast a British possession:

Cook had recorded signs that the coast was inhabited during the voyage north, and here he noted as he returned to the ship the great number of fires on all the land and islands about them, ‘a certain sign they are Inhabited’. 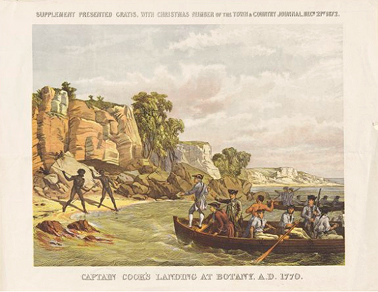 Cook’s second and third voyages involved a fuller exploration of the Pacific and Atlantic, including the search for a north-west passage through the Pacific to the Atlantic. He was instructed to make scientific observations and collect natural specimens, and to show ‘every kind of civility and regard’ to the natives, at the same time taking care not ‘to be surprised by them’. With their consent, he was to take possession in the name of the King of any convenient situations in any country he might discover. Cook eventually reached the north-west passage (the Bering Strait), but it was ice-bound and he was unable to cross it. Returning through the South Pacific, he was killed in the Sandwich (Hawaiian) Islands on 14 February 1779.

This bark shield has very few distinguishing features, but these do seem to tally with a contemporary illustration and description. The naturalist Sir Joseph Banks wrote in his journal: ‘Defensive weapons we saw only in Sting-Rays [Botany] bay and there only a single instance – a man who attempted to oppose our Landing came down to the Beach with a shield of an oblong shape about 3 feet long and 1½ broad made of the bark of a tree; this he left behind when he ran away and we found upon taking it up that it plainly had been pierced through with a single pointed lance near the centre.’

Such a hole, close to the handle, is visible on this shield. There is also a sketch by John Frederick Miller dated 1771, after the sketch by Sydney Parkinson, the HMS Endeavour’s official artist, which depicts a shield with a hole in it, just like this one.

The shield holds considerable historic significance of the first contact between Europeans and Aboriginal people on the east coast of Australia.

The shield has research significance because it is possibly the only object collected by Cook at Botany Bay in 1770, thus providing a tangible link to the people who lived on its shores before the coming of Europeans.

The shield has intangible significant being an iconic symbol of contact between the original people of Botany Bay and one of history’s most achieved navigators and explorers and a key person in the public’s imagination in the story of the foundation of modern Australia.

The object is reasonably well provenanced and documented to Cook’s first Pacific Voyage of discovery on the HMS Endeavour. It has been in the British Museum Collection since the return of the Expedition in 1771.

The shield is extremely rare. It is the only one collected by Cook on his first Pacific Voyages still in existence.

The shield represents a time early in Australia’s history when Britain was still establishing itself in the Pacific and exploring the new environment. The shield also represents the coming of Europeans to Aboriginal Australia and the wider Pacific and the occupation of land.

The shield is in excellent condition.

The shield has considerable potential to interpret the themes of British exploration and colonial expansion into the Pacific. The shield provides evidence to interpret the achievements of Captain James Cook in the exploration and mapping of the Pacific and the east Australian coast and the process of the European dispossession of Aboriginal people.