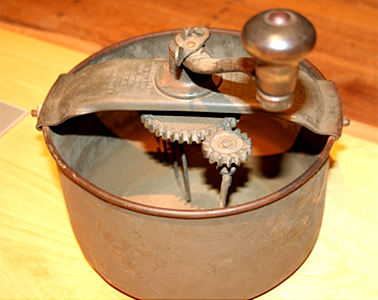 From 1790′s people in the colony of New South Wales grew vegetables to supplement their diet. But like most farmers they had to sell their entire wheat crop to buy provisions and cover costs. Basics like sugar and tea were bought in bulk along with spices, kerosene, candles and cleaning materials. All kinds of fruit and vegetables were preserved and the end of summer in whatever bottles could be found. Plums and apples were also dried for out of season use. Native limes, quandongs, figs plums and various berries gave much needed nourishment. They were made into jam to make them more appetising.

Flour was a staple food in the earliest days of the colony and was issued from the Government Store. One of the officers on the First Fleet, John Palmer, ran the first Government grain stores and the bakery had all the equipment including a windmill. Traditionally, damper was eaten instead of bread out in the Australian bush.

For working people from Europe a meal of meat everyday was a luxury. Yet in Australia in the 1880′s the basic daily diet was mutton, tea and damper supplemented by seasonal and preserved fruits and vegetables. Meat was preserved by salting and smoking. If they couldn’t afford mutton or beef they ate kangaroo, possum and wild fowl. Cakes were a luxury and often made at home for special occasions.

From the 1880′s dramatic changes had reshaped life in the suburbs. An economic boom in the export of wheat and wool was driving the colonial economy. New industries such as manufacturing, textiles and food processing were springing up at this time. As the industrialisation of the economy increased suburban bakeries, grocers and cafes flourished. More people were living in the new housing suburbs and working in stores and factories.

Most kitchen gadgets in Australia in at the turn of the century were imported from the USA. Local merchants and providores went to Europe and the USA in search of the latest fashions, culture and recipes for the local market. Large emporiums were developed by Mark Foy’s and Anthony Hordern’s, Marcus Clarke, David Jones, Peapes, Farmer’s and Nock & Kirby’s to sell a wide range of new consumables to the Sydney market.

In 1900 the Melbourne baker and pastrycook Otto Plarre travelled to Germany, England and France working with pastrycooks gaining theoretical and practical experience. His employers included The Anglo-Austrian Confectionary Company of London and George & Co. of Reading. He spent two years working closely with French & Viennese Pastrycooks, honing his patisserie skills to bring them back to Australia.

Kitchen utensils such as the Universal cake maker heralded the arrival of the industrial age. Many of these objects were introduced by migrants keen to bring the latest gizmos from overseas. Arthur Dubois, originally from Bordeaux, France is a good example. He started out as a contract worker and became a grazier in the Liverpool Plains region in the 1870s. In the 1870s a number of French Wool companies set up offices in Australia. From the 1880s the French Banks such as the Comptoir National d’ Escompte de Paris and shipping lines such as Messagies Maritimes set up branches in Sydney. These provided the basis of the French community in Sydney and they had an impact on the enrichment of culture in the town. The most obvious influence came in food and wine. For three decades, from the 1890s to the 1920s, the Paris House, owned and run by Gaston Lievain, from Lille, was Sydney’s most glamorous restaurant. 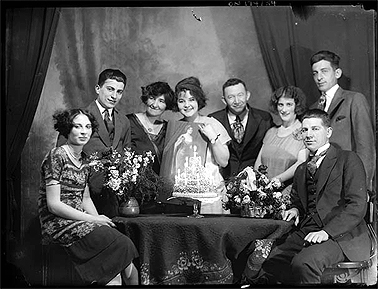 The cake maker has historical Significance as evidence of the economic transformation that swept over the suburbs of Sydney in the late nineteenth and early twentieth century. This transformation changed the social and economic fabric of New South Wales from subsistence farming and small manufacturing to that of a consumer economy that resulted in the flood of technologies and ideas from Europe and the United States with migrants and importers.

The cake maker has aesthetic significance in the design and manufacture of early food preparation technologies.

The cake maker is significant for researchers as one of the few existing Universal cake mixers made by Landers, Frary & Clark in public collections. The mixer has strong potential for researchers to establish further links to the social history of the Liverpool community.