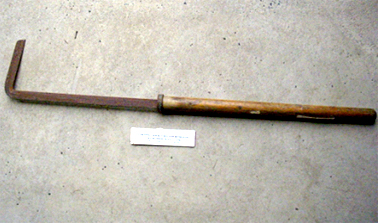 Object Description
Narrow metal blade with a right angled hook at the end, hafted on a round wooden handle. There is a metal band around the end of the handle where it is hafted onto the blade. The end of the blade is curved almost at a right angle, and has a blunt point. The wooden handle is smooth and polished from use and the blade is rusty. Dimensions: overall length 930 mm, handle 530 mm long and 35 mm in diameter, blade 400 mm long and 14 mm wide. The metal band around the end of the handle is 14 mm wide and 40 mm in diameter.

This cane stripper hook was used to remove the trash or dead leaves from the sugar cane stalks before harvesting, and to strip the cane stalks reserved for planting. The first experiments in growing sugar cane in the Tweed were carried out in the late 1860s by Joshua Bray at Kynnumboon near Murwillumbah and Michael Guilfoyle at Cudgen. A major factor in growing sugar cane is that it requires expensive machinery to crush and refine it, and to obtain the best sugar yields the cane must be crushed as soon as possible after harvesting. During the 1870s a number of individual farmers built small mills on their properties and produced sugar with varying degrees of success. Many of the small mills did not survive, hampered by inefficient production methods and the lack of a reliable supply of good quality cane and a ready market for the crude sugar they produced. In 1872, dissatisfied with the production of the small mills, sugar growers on the Tweed approached the Colonial Sugar Refining Company (CSR) to build a mill on the Tweed River. After lengthy negotiations, the CSR mill at Condong was completed in 1880 and began crushing. The lush rainforests of the floodplain of the Tweed River were progressively cleared for cane, transforming the landscape.

William Julius, who had considerable experience growing sugar cane in the West Indies, was one of the most successful independent sugar cane producers in the Tweed. He arrived in the Tweed Valley in 1875 and took up a large area of land at Cudgen, where he planted sugar cane and built a mill to process it. Most of the workers on Julius’ plantation and mill were South Sea Islanders or ‘Kanakas’, who had been lured from their homelands by the infamous ‘blackbirders’ as indentured labourers on the sugar cane plantations of north Queensland. Sugar cane production was both capital and labour intensive and a large cheap, unskilled labour force was needed as the industry developed in northern New South Wales in the 1870s and 1880s. Julius brought to the Tweed about 200 South Sea Islanders who had completed their contracts in Queensland and employed them to completely clear the land. Julius then leased lots of around 10 acres to South Sea Islanders to grow sugar, while others worked in the mill. Despite the deportation of large numbers of South Sea Islanders under the White Australia Policy after Federation in 1901, some who had married in Australia or who had been in Australia for 20 years or more were able to remain. They intermarried with local Aboriginal people and their descendants live in the district today.

Indians also played a significant role in the sugar industry in New South Wales. During the 1880s and 1890s Indian hawkers and peddlers settled in rural areas in New South Wales and Victoria. They were collectively known as ‘Hindoos’ although the majority of them were Sikhs and a few Muslims, who came from the same area of the Punjab in northern India. In the Tweed Valley Indians found work as labourers on sugar cane farms, some rented their own farms to grow sugar cane, and others grew bananas or worked in the dairy industry. During and immediately after the Second World War the cane farmers of the Tweed were desperately short of labour. European migrants played an important role in the survival of the industry. Refugees had to work for two years as a condition of their assisted passage to Australia and many were sent to work in the cane fields of northern New South Wales.

The sugar industry in northern New South Wales and Queensland did not begin to mechanise until the 1960s, when it became increasingly difficult to find men willing to undertake the hot, dirty and strenuous work of cutting and loading cane. Serious interest in mechanisation was prompted by the severe labour shortages during and after the Second World War, but it took almost 30 years of improvisation and adaptation before the cane industry was fully mechanised. The process of mechanising the sugar industry was so slow because of the difficulties of handling such a bulky crop and the variety of terrain in which it was grown. First loading of cane was mechanised with the development of front end and hydraulic grab loading machines, replacing the back-breaking work of loading by hand. Cane continued to be cut by hand for many years, until the mid 1970s when mechanical harvesters were in general use. In fact there was initially little cost advantage in mechanisation, and when mechanical harvesting was finally introduced it was found there were higher losses of cane during harvest and greater quantities of dirt and extraneous matter compared to hand harvesting. The cane was no longer stripped by hand, but harvested complete with leaves and trash.

Cane stripping hooks were not a product of the factory but were made by the farmer himself or the local blacksmith.

Stripping cane for planting was generally an ‘off season’ job and provided much employment when there was little other work in the cane fields. Many cane cutters undertook other seasonal farm work during the cane off season, which was usually from February or March to May. Stripping was considered not as laborious as cutting or loading cane and accordingly paid less. Older men and boys often worked at cane stripping. During the Second World War many women joined the Land Army and they took on all kinds of farm work, from harvesting beans, potatoes, onions and carrots to driving tractors. In the Tweed Valley they also worked stripping and planting cane. June Dwyer worked stripping cane in the 1940s. The men who cut the cane would leave a pile of cane behind to be stripped for stock for planting. The smooth stalks of stripped cane would be piled on one side and the trash on the other. Once the cane was stripped the women would ride behind the tractor, pushing the cane into the planter. The machine would cut the cane into billets or pieces approximately 20 cm long and they would drop onto the ground, and be covered with soil, to strike new cane corms. Today with mechanisation cane is planted without stripping off the trash, but it does not make such good stock.

Stripping cane was hard, hot and dusty work, working nine hours a day out in the sun with no shelter. The women started at 6.30am and finished at 4.00 or 4.30 pm, with breaks for lunch and morning and afternoon tea. They wore long sleeved shirts and pants, large hats and sandshoes. It was cold when they first started work but as the day got hotter they would peel off their layers of clothing. They worked in gangs of six, and there was a real camaraderie; they would chat and joke as they worked to make the time pass more quickly.

Sometimes the women would go through and strip the cane while it was still standing, before the men came through and cut it. Margaret Hunter has vivid memories of stripping cane every day, rain hail or shine, often with mud up to her thighs. It was also hazardous crossing the numerous cane drains on narrow planks, or a single log. Margaret remembers crossing a slippery log over a cane drain, a billy can in one hand and a basket in the other, and falling in. The water wasn’t very deep but she was covered in mud from head to toe. They also had to watch out for snakes. Margaret also remembers the bargaining they had to do with the farmers over their wages, to get a few more pence for their work if the cane was in poor condition or the ground rocky. One woman in the gang was elected boss, and was their spokesperson in dealing with their employers. On one occasion the gang decided that the cane on the farm they were working on was in such a state that they deserved more wages. The boss of the gang said, ‘I will do all the talking, but come with me to back me up’. But Margaret had been strictly brought up by her mother, that it was rude to listen in to other people’s conversations and she walked away.

This cane stripper hook was used to remove the trash or dead leaves from the sugar cane stalks before harvesting, and to strip the cane stalks reserved for planting. It has historical and technological significance in that it demonstrates the the hard manual labour involved in planting, cutting and loading sugar cane before mechanisation of the sugar industry, first of planting and loading sugar cane and later of harvesting the crop.

The stripper hook also has historical significance for its association with the manual labour of the many South Sea Islanders, Indians and migrants from Europe who were the backbone of the sugar industry in northern New South Wales. It also represents the labour of the many women who worked in the sugar cane fields of the Tweed during the Second World War.

Boileau, Joanna 2006, Caldera to the Sea: A History of the Tweed Valley, Tweed Shire Council, Murwillumbah.

Kijas, Johanna 2007, The Other Side of the World: International Migration to the Tweed 1940s to 1960s, Tweed Shire Council, Murwillumbah.

Johansen, Ron, ‘Tramlines of the Tweed Canefields’, Tales of Our Times Vol. 4, November 1995.