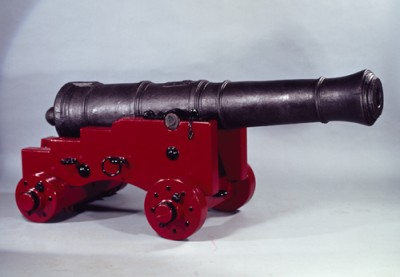 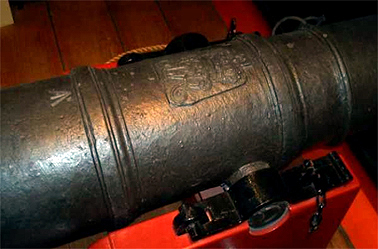 In 1768, England sent an expedition to Tahiti to chart the transit of Venus across the sun. A brilliant Royal Navy navigator and map maker named James Cook was put in charge of the expedition on the converted coal carrier HMS Endeavour. After completing the astronomical task, Cook set out to find if there was a Great South Land, as navigators had believed for hundreds of years. After circumnavigating New Zealand, Cook’s expedition sailed west for Van Diemen’s Land (Tasmania) but winds forced the HMS Endeavour north and the expedition came upon the east coast of Australia in April 1770. For the next four months, Cook mapped the east coast of Australia from Eden to the Gulf of Carpentaria. At a brief and simple ceremony at Botany Bay, Cook named the entire east coast of Australia New South Wales.

In June 1770 the HMS Endeavour was damaged when it struck part of the Great Barrier Reef. In an effort to float it off the reef by reducing weight, Cook ordered six cannons and other heavy items thrown overboard, charting the location of this incident (possibly for later recovery or perhaps simply because he kept detailed records of all aspects of his voyages). In 1969 researchers, using a magnetometer to scan the reef in the area shown on Cook’s charts, discovered the six cast iron cannon. Invisible under two centuries of coral growth, underwater explosives were used to free the cannons from the coral. The wooden stocks, if they survived, were not retrieved.

In the same year, an expedition from the American Academy of Natural Sciences successfully located and raised the six cannons which are now displayed in London, Wellington, Philadelphia, Cooktown and two in Sydney (at the Australian National Maritime Museum).

After recovery from the sea floor, the cannons were transported in sea water then left to soak in a sea water solution with 10% formalin to kill any bacteria present. Hammers were used to remove hard coral from the surface. Core drilling of the cannons’ bores recovered wadding, cannon balls and the residue of powder charge from some of the cannons.

The cannon has historic significance as it is from the HMS Endeavour, the vessel used by James Cook to chart the east coast of Australia. Cook is one of the greatest navigators and cartographers in European exploration history.

The cannon has aesthetic significance in that it is well enough preserved for the Royal Navy broad arrow, the British Royal emblem and other identifying features to be clearly visible. This also gives the cannon significance for researchers. These symbols are code used by the British Royal Armourers to document not only the repairs and alterations made to the cannon over time but also where this work took place.

The cannon has intangible significance, being an iconic symbol of Captain James Cook, the person responsible for the foundation of modern Australia as we know it.

The object is well provenanced and documented. The cannon is extremely rare. It is one of six cannon discarded by Cook on the reef near Cooktown.

The object represents a time early in Australia’s history when England was still establishing itself in the Pacific and exploring the new environment. The cannon also represents the coming of Europeans to Aboriginal Australia. With the distinctly classic shape of a small ship’s cannon, it is instantly recognisable as a symbol of navigation and exploration.

The cannon is in excellent condition.

The cannon interprets the themes of British exploration and colonial expansion into the Pacific and the achievements of James Cook in the European discovery and mapping of the east Australian coast. The cannon can be found in the Navigators exhibition in the Australian National Maritime Museum. The original cast iron cannon has been placed in the recreated wooden stocks to show how it might have appeared on the decks of the HMS Endeavour.