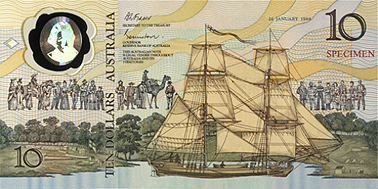 Object Description
This note was issued by the Reserve Bank of Australia to mark the 200th anniversary of the arrival of the first European settlers. Designs on the note celebrate the variety of cultures within the country. One side depicts the ship HMS Supply and a group of people against a view of the early British settlement at Sydney Cove. The other side of the note portrays elements of Aboriginal culture, including ancient rock painting, an Aboriginal youth and a ceremonial Morning Star Pole. Background patterns are taken from designs specially commissioned from Aboriginal artists. The note is also unusual because it is not made of paper. There had been earlier experiments with plastic notes, in Haiti and the Isle of Man, but this Australian note is printed on a polymer material developed after many years of research. All Australian notes are now made of polymer. Dimensions: 155mm long x 78mm wide.

In 1979 the Australian Government announced the intention of establishing The Australian Bicentennial Authority to plan and coordinate a national program of celebrations in 1988 to commemorate the bicentennial of the first European settlement in Australia. The themes of the celebrations were ‘Living Together’ and ‘Celebration of a Nation’.

The Authority’s task was to plan, co-ordinate and promote the celebrations for the Bicentenary that included the widest possible participation by the community. The brief included encouraging involvement in the program by the shareholder governments, local government authorities, community groups, the corporate sector, the public generally and the international community.

The Bicentennial Program provided an opportunity to re-examine Australia’s history, spanning more than 40,000 years but with particular emphasis on the past 200 years. It encouraged the Australian people to look at themselves critically and to undergo a process of national self-assessment.

The development of a theme for the Bicentennial program was one of the Authority’s earliest priorities. ‘Living Together’ was chosen as a reflection of co-operative effort by every Australian, irrespective of background. It is a forward-looking theme that describes an ongoing process and refers to a program yet uncompleted.

By 26 January 1988, the organisation of the bicentenary was complete and community were ready to embrace the NSW Bicentennial Council’s logo ‘Let’s Celebrate’. The world witnessed an enthusiastic and patriotic nation as Australians enjoyed the spectacular events on and around Sydney Harbour and across the country. An estimated 2.5 million people attended the celebrations in Sydney. In 1988, for the first time, a public holiday was held around the nation on January 26 January. In Sydney the ships of the First Fleet Re-enactment arrived in Sydney Harbour. These ships had departed Portsmouth on the 13 May 1987, arriving in Botany Bay earlier in January and then finally entering the heads on the morning of 26 January 1988. On the same day the sail training ship the Young Endeavour became Britain’s Bicentennial gift to the nation and Sydney Harbour was also host to a large number of Tall Ships from many nations.

Before 1988, re-enactments of the 1788 landing were standard for any Australia Day ceremony. In 1988 however, while the First Fleet ships staged a re-enactment of the voyage and arrival of the original First Fleet in Port Jackson, the NSW government reacted strongly against the suggestion of a landing re-enactment, stating they would ‘ensure that such a completely insensitive and politically volatile act did not take place’. An advertisement was placed in the Sydney Morning Herald acknowledging the arrival of the First Fleet had led to the “destruction of Aboriginal society.” The ad, signed by the organiser, Dr. Jonathan King, a descendent of Gidley King an officer on the 1788 First Fleet, also stated, “The way in which Aboriginal society has been disregarded and almost destroyed since the arrival of Captain Philip’s fleet must now be recognised. Their needs must be acknowledged, their protests must be heeded.”

Alongside the formal program celebrating 200 years of white settlement, the Aboriginal community staged a massive march for ‘Freedom, Justice and Hope’ in Sydney. It was estimated 15000 people attended the march and rally. The five-kilometre march began with a mourning corroboree. White supporters were asked to join the march halfway. The protests organiser, the Reverend Charles Harris, called for a national conference to examine ways of increasing Aboriginal democracy. Reverend Harris suggested people like Justice Michael Kirby be involved. While 1988 was named a Year of Mourning for Aboriginals, it was also regarded as a celebration of survival. This was the most vocal indigenous presence ever felt on a 26 January.

In 1985, the Reserve Bank of Australia decided to trial the new technology in a Commemorative $10 note. This note was to be the RBA’s contribution to the celebration of Australia’s Bicentenary in January 1988. 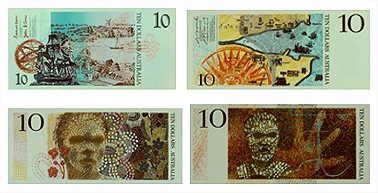 These early designs were variations on the First Settlement theme chosen in the mid 1980s. 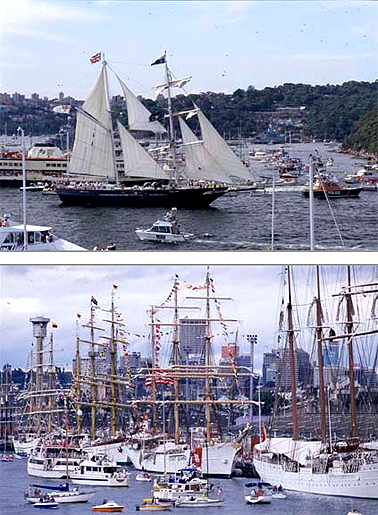 Eleven ships of the First Fleet Re-enactment sailed into Sydney Harbour on 26 January 1988 to start the Australia Day celebrations.Courtesy of the National Archives of Australia

Harry Williamson, designer of the $100 decimal note, was chosen to lead the design team, with a theme of ‘settlement’.

This Commemorative $10 note was the first banknote in the world to be printed on a non-fibrous polymer substrate. It incorporated a Diffractive Optically Variable Device (DOVD), which featured Captain Cook. One side of the note symbolised European settlement with HMS Supply, the first ship to drop anchor in Sydney Cove, and a medley of persons symbolising all who have contributed to Australia’s development since 1788.

The other side of the first polymer note symbolised the original discovery and settlement of Australia some 40-60,000 years earlier. It depicts an Aboriginal youth, a Morning Star Pole and other designs including from Aboriginal artworks commissioned by the Bank.

The Reserve Bank of Australia was involved in a dispute with a north eastern Arnhem Land artist named Terry Yumbulul who argued the RBA used an unauthorised reproduction the “Morning Star Pole” on the 1988 commemorative ten dollar bank note. The “Morning Star” ceremony is a very important ceremony, and the pole plays an important role in the ceremony. Mr. Yumbulul complained that his permission had not been obtained to reproduce the pole on the bank note with the result that he believed that the importance of the pole had been diminished by an inappropriate reproduction. There was a resolution between Mr. Yumbulul and the Reserve Bank, which unfortunately for him did not involve the Bank conceding to Mr. Yumbulul’s claim for damages in relation to the bank note. But it still involved a gesture of recognition by the Reserve Bank towards Mr. Yumbulul and the payment of some money.

The bank note has historical significance as tangible evidence of the 1988 Bicentennial celebrations and the recognition of the cultural diversity that had evolved in the Australian community up to that time. The bank note is evidence of the Australian Government openly embracing multiculturalism and attempts to reflect a modern nation, as evidenced in the imagery and language on a new technology and currency.

The bank note has intangible significance to the Australia nation at a time when the nation had to come to terms with its British penal beginnings and the dispossession of the Aboriginal people, the White Australia policy of the late nineteenth and the twentieth century and the multiculturalism that had evolved from the waves of mass migration after World War Two.

The bank note is significant for researchers as it is one the first issue of the new polymer bank notes. The images and language used onto the note also provide an insight to culture and values in Australian society of the late 1980s.

The bank note is extremely rare as it is a prototype specimen. It is one of a kind.

The Bicentenary in 1988 represents a time when the Australian community appears to be at ease with the multiple layers and the many voices of their history and were engaged in celebrating this cultural diversity and recognising the Aboriginal past. The bank note represents a coming of age that officially acknowledges these themes on a medium that is handled by millions of people daily.

The bank note is in excellent condition.