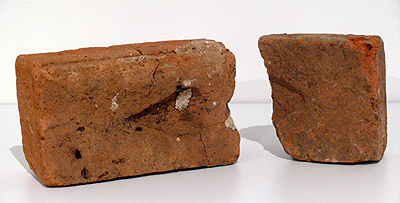 Convict bricks from the remains of the blacksmith’s shop at Horsley. Courtesy Fairfield Museum and Art Gallery

Object description
Convict bricks, terra cotta in colour with evidence of sand and shell, with an indentation on one side, and a rough and pitted surface. Condition is fair. Dimensions: 230mm long x 110mm wide x 60mm high. Typical of sandstock bricks produced up until 1850, they are smaller in depth than later sandstock bricks ranging from 64mm to 71mm.

Lack of available tradesmen during the early years of World War II prevented the repair of the building. Also, a lack of building materials in general, saw many of these remanent bricks being given by the Moffitt’s to other families who were building in the area.[1] 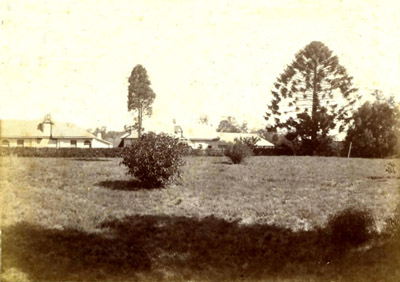 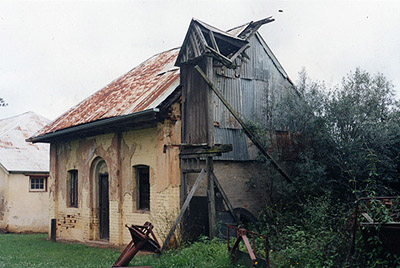 Remaining half of the blacksmith’s shop, 2009. Courtesy Fairfield City Museum and Gallery

Horsley stands on part of Colonel George Johnston’s 2000 acre land grant received in 1805 from Governor King for Johnston’s part in quelling an Irish convict uprising at Vinegar Hill in 1804. After Johnston’s death in 1823, his youngest daughter Blanche inherited the property, which was known as “King’s Gift”. Blanche married Captain George Edward Nicholas Weston who had served in the British army and as a judge in India[2]. Weston had come to N.S.W. in the 1820s to visit his brother William Francis Weston and liked what he saw of the colony.

In order to settle permanently in New South Wales, the Westons left for India in 1829 for two years to finalise Captain Weston’s private affairs and on their return in 1831, they brought with them George Weston’s two children. The family was extended by 4 girls and three boys, 9 children in total living at Horsley.

With the help of convict labourers, they built their large hipped roofed bungalow which in style, emulated Indian colonial architecture and the life Weston had experienced in India, complete with a team of Indian servants[3]. The house was named “Horsley” after Captain Weston’s family home, West Horsley Place near Ripley in Surrey, England. 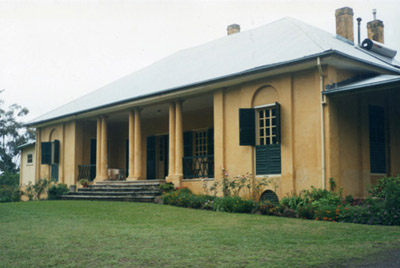 While the many bricks, like this example in the Museum’s collection, were used to build and make Horsley homestead and its outbuildings a significant historic asset in Fairfield, the role the makers of the bricks played in the development of the colony is also important.

The brick makers were transported convicts who were assigned to the private owner of Horsley, Major George Weston. The convict gang used in 1831 at Horsley Park, were one of the last consigned to private developers prior to the cessation of convict servitude and the hand moulding of bricks was replaced with brick making machines. While the house and other brick buildings on the site were being built, the Westons themselves lived in a marque on site. By 1841, the Census showed that the number of assigned convicts working on properties were a mere handful.

For properties on the outskirts of Sydney, it was cheaper to hand mould the bricks and either cure them in temporary kilns, or to sundry the bricks on site, rather than to have them transported to the site by drays over rough roads. The bricks made at Horsley were sun dried.[13] The hand moulding brick makers, whether convict or free labourers, were in demand as it was a skill which took months to acquire. The clay for the bricks was obtained from the dam paddock which is now part of a residential subdivision[14].

The mould would have been an open rectangular wooden frame and the top edge may have been fitted with metal strips to keep the shape and to prevent ware. The size of the wooden brick mould was made to allow for shrinkage during firing and drying. An Australian authority on the manual process advised that the mould should measure 9½ x 4½ x 3¼ inches to achieve the required size of 9 x 4½ x 3 inches[15], although there was no standardised size for bricks throughout the nineteenth century. The mould was then dusted with sand to allow the clay to slip away easily, hence the origin of the term ‘sandstock’. Bricks were coated with dry sand to prevent them adhering to other surfaces, and allowed to dry. Bricks from this process were often soft and of low quality due to the inefficient temperature control of the wood fire or the sun.

The marks on the brick relics show that of a heart, which, along with the diamond, spade and club, were popular symbols. The desired imprint mark was usually hand carved from wood and screwed or nailed to the stockboard attached to a workbench, which the upper or ‘strike’ face of the brick was placed over. Frogmarks were used to identify either the brick makers or the owner of the house to avoid theft. 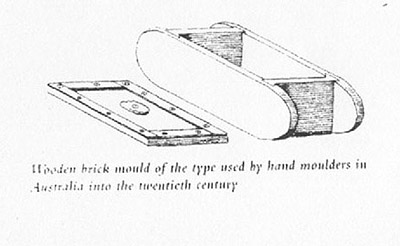 The lack of natural deposits of lime for mortar in the Sydney region meant that the quality of many bricks was poor, making it necessary for adding hair, animal or human, with the sand and water to bind the brick. While there was surveillance of assigned gangs by the military, there was not the same requirement to oversee the quality of the output. The problem of leaky brickwork and dampness plagued early buildings, which needed to rely on regular whitewashing with lime and water to retard dampness. Fashion as well as necessity from the early 1830s required the brick walls of houses to be stuccoed. As the walls of the house are double brick and without cavities, living conditions experienced by the current owner, Mrs Helen Kerfoot, are that the interiors are cool in summer and cold in winter.[17]

Convict clay brick drains are still visible around the base of the house and their purpose was to channel water from the roof, which was originally gutterless, to an underground water well to the west of the kitchen.[18] The dome covered well or tank remains visible on site, and gutters now feed rainwater to an aboveground tank.

The original grant was 2000 acres, and the current Curtin of the homestead is 9½ acres, having been reduced substantially by a number of subdivisions. Some of the brick walls on the outbuildings are lime washed and need to be regularly rewashed. The bricks of the main house are lime plastered, although rising damp from the porous bricks is a continual problem to be managed.

The convict brinks are historically significant as Horsley House is the only Australian colonial house that can be directly related to Anglo-Indian architecture. Not only the design with a punkah in the dining room to fan diners, but also details and fittings such as the folding casement doors and the louvered jhilmils (shutters)[19] made of teak, all purchased through connections the Westons had in India.[20]

Additionally, the house and complex is an excellent example of a self-contained country estate of the early 19th century, with extensive out-buildings behind the house including an estate office/library, kitchen, servant’s quarters, and stables still existent. The former kitchen, office and house retain much of the original lathe and plaster internal walls, original windows, doors, and hardwood board floors and shingle roof under corrugated iron roofing. Servants’ bells, which linked the service area to activities in the house, are still visible under the roof of the back verandah.

The Horsley estate represents one of the last examples of a purpose built village on the fringe of Sydney supplying and maintaining all the needs of the occupants down to cheese and butter making and storing cellar rooms, although most of the outbuildings are now not used for their original purposes.

The convict bricks have interpretive significance as evidence of building skills and economic growth that occurred on the outskirts of Sydney through the homestead estates, and no doubt enhanced by the use of free convict labour. The convict constructed home and outbuildings at Horsley bear witness to the many pioneering endeavours that flourished there for some 75 years. It is a tribute to all the owners and carers that this important part of our colonial built environment has been preserved for future generations.

[11] At an exhibition at the Museum of Sydney in 2003, a replica of the dining room at Horsley complete with a set of shutters from Horsley, and a reconstructed punkah, coincided with the launch of James Broadbent’s India, China, Australia Trade and Society 1788-1850. Following the exhibition the punkah was given by the Historic Houses Trust of NSW to Mrs Kerfoot to be eventually reinstated at “Horsley”.

[17] Oral History interview with Mrs Helen Kerfoot, as part of the interview series The Way We Were, at the Whitlam Library, 3 September, 2003.

[19] Jhilmils – timber shutters with adjustable blades that could be angled to control the flow of natural light and breezes.

Gemmel, W 1986, And so we graft from six to six – The brick makers of New South Wales. Angus & Robertson Publishers. London.

Varman, R 1993, Bricks and Nails: Building materials as criteria for dating Sydney and environs from 1788. A Documentary Survey and Assessment of Dating Potential. PHD thesis, Department of Prehistoric and Historical Archaeology, University of Sydney, September.