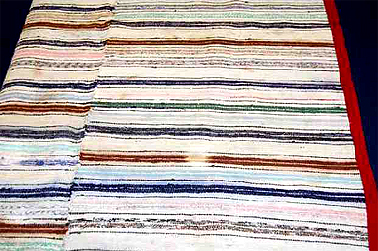 1. Woven blanket. (Pezzara) Cotton thread with multi-coloured strips of poplin cotton recycled fabric Woven on a hand loom in two sewn together strips (each 680mm being the width of the loom). Made by Catarina Oliva c1955 in Plati’, Reggio Calabria. Brought out to Australia in 1959.

2. Silk coverlet. Fine hand woven “raw” silk coverlet c.1946, Woven by Joe’s grandmother, Elisabetta Romeo, from silk “leftovers”. The silk worms were grown in the weaver’s household, and the cocoons boiled up in a pot to soften. When the silk was ready, the right strand could be pulled and would keep coming to form a continuous fine thread for spinning. This particular coverlet was mustard coloured, dyed by one of the town’s dyers. Joe thought the dye was made from broom flowers.

3 Bath towel, made of Ginestra (broom) fibre. This is a very fine piece, although most broom fibre was used for coarse weaving. Ginestra (broom) was a shrub that grew in the countryside of Plati’. The whole community helped to gather broom branches, which grew wild on the mountains. The women would harvest the spikes of the plant, bunch them together and secure each bunch with string. The bunches would then be placed in a copper full of boiling water for about an hour then the ginestra bunches would be removed and taken to the river and placed at the edge of the flowing water and secured with rocks to soften for a week. The next stage was that the women would strip the green outer layer exposing the inner fibre. After the soaking, the bark came off easily, and the stripped branches were thrashed with rods and pounded on rocks at the river to release the fibres and rewashed to bleach the fibres. The fibre strips would then be thrashed. In the last stage, the dried fibres were combed through between nail-studded boards to split the fibres and produce a fibrous mass like wool. The fibre would be then put through the spindle ready to be woven into very coarse fabric. The fibrous mass was then spun and woven to make items like mats for wrapping and carrying things in, blankets, bags for wheat etc. During the war, when things were tough, and Joe was a small boy, his family made him a pair of Ginestra (broom) fibre shorts. They stood up by themselves, but he was happy to have them and wore them proudly to school – returning home somewhat raw at the end of the day – but not to be deterred, a bit of lining was added and they did the job.

4. Coloured table cloth. A tablecloth embroidered on white hemstitched linen, with brightly coloured floral designs, was typical of the area. It was made for Cath’s trousseau by her cousin, Marietta Oliva, a full time embroiderer, and took four weeks full time work to complete. Nuns taught the traditional designs at the convent and passed on the skill of embroidering.

5. Set of two cotton pillow shams made by Concetta Catanzariti (Cath Catanzariti’s mother-in-law). Such “fancy-work” was embroidered by a sewing machine. White work was popular and typical of Plati’. It was mainly used for bed linen – crisply starched pillow shams, and a long strip which ran the length of the bed over, but not covering, the blankets. It was placed on the bed during the day and carefully folded at night.

7. A woven blanket, in an intricate pattern done in bright red, ruby red and yellow, was made by Cath’s grandmother, Caterina Oliva. After the wool was obtained from the shepherds, it was spun using a small spindle – not a spinning wheel – then taken to a dyer for colouring. Cotton used for the warp may also have been homespun. The looms were relatively narrow, so the blankets were woven in three strips, which were sewn together to make a very heavy blanket. It was bound with taffeta, but this was only done for special occasion blankets – most were unbound. 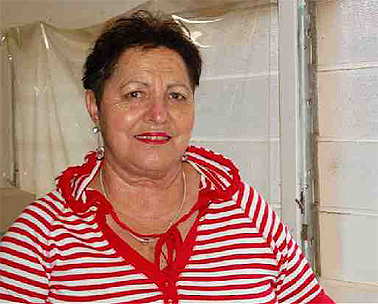 These fine examples of Calabrian handcraft that are among the things brought to Australia by the Catanzariti family (Joe, Cath and Cath’s mother, Mrs Zirilli). Both the Catanzariti and Zirilli families came from the town of Platì’ in Calabria, about 400 kms south of Rome, located in a picturesque valley. Earlier this century the town had a population of around 7,000. It is now down to around 1,500 with approximately 70,000 Platì’ descendants overseas. Like other Calabrian towns, its citizens were not wealthy, with the surrounding land owned by a “lord”, who controlled use of the land and taxed the inhabitants. 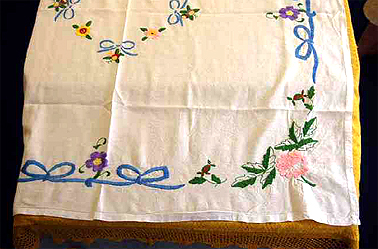 Tablecloth embroidered on white hemstitched linen made for Cath’s trousseau by her cousin, Marietta Oliva. Typical of Plati and district. Photograph Peter Kabaila

Many of the inhabitants of the town depended on cottage industries for their livelihood. There were specialist embroiderers, spinners and dyers. Joe’s grandmother Elizabetta Romeo was a weaver, as was his mother Concettina Catanzariti. 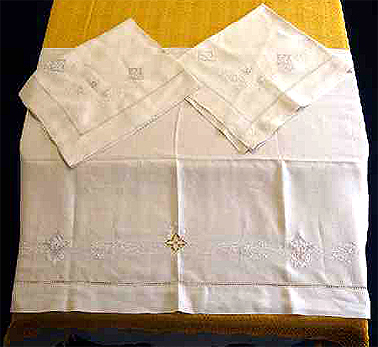 Set of two cotton pillow shams made by Concetta Catanzariti (Cath Catanzariti’s mother-in-law). Such “fancy-work” was embroidered by a sewing machine. White work was popular and typical of Plati’. Photograph Peter Kabaila

Cath’s grandmother Caterina Oliva and her mother’s sisters Concettina Iermano and Caterina Schimizzi were also weavers and embroideresses. Cath can remember sitting next to her grandmother while the wool was “combed” and listing to the rhythmic click clacking of the loom in motion. Most of the Items were made for a daughter’s trousseau. Often, a daughter’s trousseau would begin from birth. The trousseau was a very important part in preparation for marriage. A week before the wedding the mother of the bride would display the bride’s trousseau in her home and invite the future mother in-law, sisters in-law and all the women in the neighbourhood. 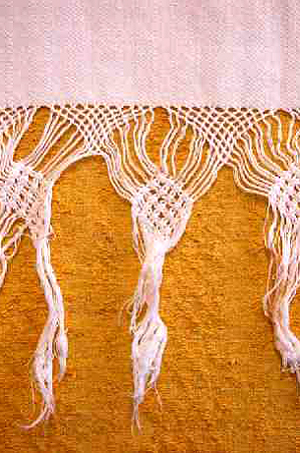 Bath towel, made of Ginestra (broom) fibre. This is a very fine piece, although most broom fibre was used for coarse weaving. Ginestra (broom) was a shrub that grew in the countryside of Plati’. Photograph Peter Kabaila

This collection is of historic significance as a family craft handed down from mother to daughter.

This collection of is of moderate to high aesthetic value for its fine standard of handcraft. 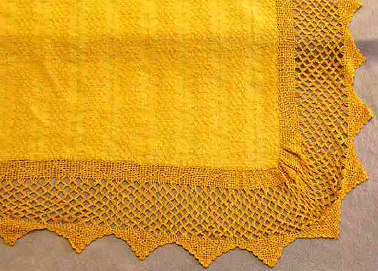 This collection has high research significance for the study of cottage crafts in Australia. The collection has potential for oral history research with Cath Catanzariti as a primary source.

This collection of items is an example of a craft brought to Australia from Italy by Italian women. It is significant to Italian women as evidence of a cottage industry, once prominent in Calabria, passed down from mother to daughter. The collection is also evidence of the high level of skill. 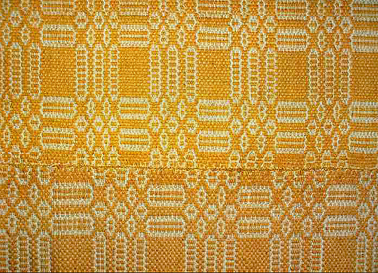 The history and provenance of Cath Catanzariti’s collection is well established.

This collection is a highly representative sample of work of a cottage craft.

These craft items on their own are not rare, however the collection as a whole, with its examples of a range of work, both hand-made and machine-embroidered, is rare.

This collection has been kept in good condition.

This collection has interpretive potential as an example of a female trade, because of its completeness.