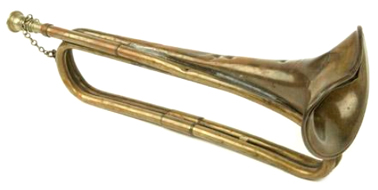 Object Description
Brass; silver; long double-loop brass bugle, with a silver mouthpiece fitted with a chain and linked to the body of the bugle. The bugle was made by Boosey & Co; Boosey & Hawkes Ltd. United Kingdom: England, London, c.1930-1939. The bell is impressed ‘Boosey & Hawkes Ltd Makers London no 278′. The bugle is in good condition however there is damage to the bell end of the bugle, and the reinforcing loop has separated from the body. Japanese POW Toyoshima Hajime used the bugle to signal the start of the mass escape of Japanese POWs from Cowra POW Camp.

Toyoshima Hajime was Australia’s first Japanese POW. Toyoshima had been the pilot of a Japanese Mitsubishi Zero B11-1 aircraft, from the Japanese Imperial Navy Aircraft Carrier ‘Hiryu’, who participated in the first air raid on Darwin. During the raid his plane was damaged and he made a crash landing on Melville Island, where he was disarmed and captured by aborigines from the Snake Bay settlement who then took him to Bathurst Island and handed him over to Sergeant Leslie J. Powell, 23 Field Company, Royal Australian Engineers. 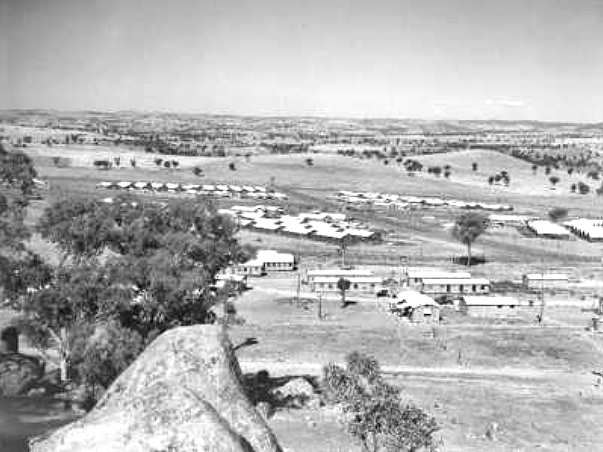 Looking west showing compounds of the Cowra prisoner of war camp with the group headquarters buildings in the foreground. Courtesy Australian War Memorial

A large army camp was established just outside Cowra in 1940 that was converted to a Prisoner of War (POW) camp following year. On 5 August, 1944, this camp became the site of the largest mass POW escape in British military history. It was also the only such escape attempt to occur in Australia. 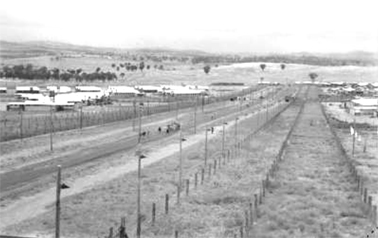 At that time the camp contained about 4000 prisoners who were held in four separate compounds of 17 acres each. Compound B, hopelessly overcrowded, held 1104 Japanese POWs.

On 3 June, 1944, a Korean prisoner reported a conversation in which he heard about a plan among the Japanese to attack the garrison, seize arms and ammunition and escape.

As a result security was stepped up and it was decided t break up the Japanese POWs. On 4 August, the leader of Compound B was handed a list of internees to be transferred to the POW camp at Hay on 7 August. At 1.30 a.m. on the 5th of August a bugle sounded and the prisoners of Camp B in two groups armed with knives and axe handles the perimeter wire of the camp. They threw blankets over the barbed wire, or crawled under it, while others dressed in heavy clothing, threw themselves on the wire for others to climb over. Twenty buildings were burned down.

Two privates, who manned one of the Vickers machine gun trailers, were overrun and murdered. Another private was stabbed to death in the fracas and a lieutenant was killed and four Australian personnel were wounded during the round-up the following morning.

378 Japanese POWs escaped although the media were kept entirely in the dark about the event and local civilians were given partial and at times false information. Within nine days 334 escapees were recaptured. One POW reached Eugowra, 50 km away. Others had been killed and some committed suicide. In all 231 Japanese died and 108 were wounded. 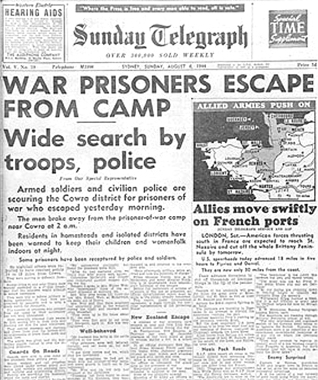 Unlike the many Italian POWs were, for the most part, cheerful and cooperative, the Japanese POWs were surly, difficult and resentful. Attempts at employing them outside the camp had proved a failure due to their aggressive behaviour. Their lack of cooperation and the breakout itself arose from an overwhelming sense of shame engendered by a code of honour which viewed capture as a disgrace to themselves, their families and their country. When the internees returned many felt their ‘shame’ would render them unworthy of return to Japanese society and half did not tell their families they had been POWs.

Toyoshima Hajime convinced others that only a breakout to rejoin the war was the noble thing to do and so a mass breakout was planned. Many Japanese POWs were glad to be out of the war but felt compelled by those who enforced a Samurai warrior code and did not want to blacken their family’s names in Japanese society. The mass breakout was attempted on the night of 4/5 August 1944. The bugle was used at about 1:30am by Toyoshima Hajime to signal the start of the breakout. After the breakout, his body was discovered, having suicided in a ditch just outside the perimeter wire.

The actual origins of the bugle are currently unknown, but the Camp Commander Major Edward Vivian Timms of Sydney, recovered it, took it home, and hung it in his sitting room until his widow donated it to the Australian War Memorial in 1978. Timms served in the First World War under his stepfather’s name (King) with 1 Battalion at Gallipoli and had returned to Australia by 10 October 1915. He re-enlisted for the Second World War on 7 June 1940 and was discharged on 21 June 1946.

A Japanese war cemetery was established by agreement with the Japanese government in 1964. It now contains the remains of all Japanese POWs and civilian internees who died during their imprisonment in World War II.

A student exchange program was established in 1970 between Cowra High School and the Seikei High School in Kichijyouji in Tokyo. The Japanese Garden and Cultural Centre was set up with the aid of the Japanese government in 1978-79 to honour the dead on both sides.

The bugle is historically significant as evidence of the events the surround the internment of POWs in Australia in World War II and the experience of the Japanese POWs life at Cowra camp.

The bugle provides a research tool for historians to explore the Second World War chapter of Australian history and give the story a wider meaning in the context of the history of migration and settlement of Australia.

The bugle has intangible significance providing a reminder of the fears felt by the Australian, Italian and Japanese communities of war, the loss of loved ones and the insecurity of war time.

The bugle is well provenanced to the Camp Commander Major Edward Vivian Timms who owned it until his widow donated it to the Australian War Memorial in 1978.

The Cowra POW Collection is rare in that it relates specifically to the POW occupation of the site and it is associated with those particular groups who emerge as significant participants at the Cowra POW Camp and World War II Australian POW camp history.

The bugle represents the culture and traditions of the Japanese POWs. It is part of a larger collection representing the German, Italian and Japanese experience in Australia during World War II.

The bugle’s importance lies in its potential to interpret the place as a site associated to POWs and internment, the internment camp itself, the Japanese experience and the contrasting experience of Italian communities. The Collection presents the opportunity to interpret the stories of various individuals who were interned at Cowra POW camp.