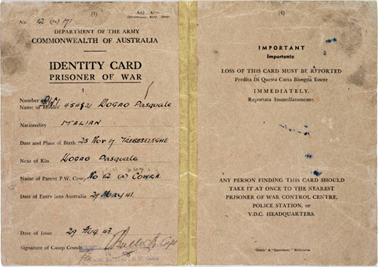 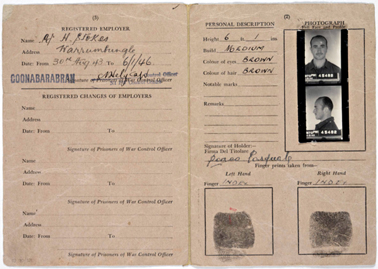 Object/Collection Description
Prisoner of War Identity Card issued by the Commonwealth of Australia – Department of the Army – No. 12 (a) Cowra, 29 Aug. 1943, including photographs, fingerprints and signatures, with 12 photographs of Dogao’s period as a prisoner of war, mainly in N.S.W. Dimensions: 200mm long x 350mm wide. Good condition.

Australia declared war on Germany on 3rd September 1939 the same day Britain did. Australian was now an independent member of the British Commonwealth of Nations. It did not have to join the war to support Britain. But most Australians believed that if Britain was in trouble it was Australia’s duty to help.

In Italy Mussolini had become dictator in 1922. Like Hitler, he set up a one party government. Italy was ruled by the Fascist party. Mussolini wanted to strengthen Italy’s power and to take over more land to make Italy a powerful nation. Italy’s armies invaded North Africa 1941 to establish a Fascist presence and interrupt allied shipping and transport links in North Africa. Australian troops helped defeat the Italians in North Africa. They drove the Italians from Bardia, Tobruk and Benghazi. Thousands of Italian prisoners of war (POW) were captured in the process. Many of these men were sent to Australia as POWs and were interred at Cowra POW camp.

A large army training camp was established just outside Cowra, New South Wales in 1940 which trained some 70 000 personnel throughout World War II. The following year, a Prisoner of War (POW) camp was built at the north-eastern outskirts of town. On 5 August, 1944, this camp became the site of one of the largest mass POW escapes in Australian and British military history

The POW camp was huge, covering an area of over thirty hectares. It was circular in shape and divided into four separate compounds by two, seven-hundred-metre long thoroughfares, known respectively as ‘No Man’s Land’ (which ran approximately east-west) and ‘Broadway’. Broadway, so called because of its bright lights at night, was used as an access road, as it ran in a north-south direction. 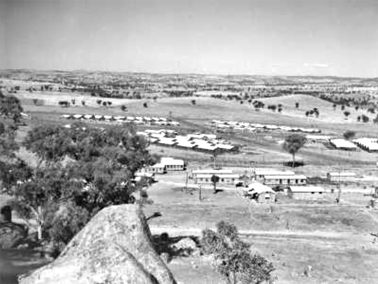 Looking west showing compounds of the Cowra prisoner of war camp with the group headquarters buildings in the foreground. Courtesy Australian War Memorial

Approximately half the prisoners in the camp were Italians, who occupied A and C compounds, while D compound housed Japanese officers, Korean and Formosan prisoners. B compound contained Japanese non-commissioned officers and junior ranks. It was from within the confines of this compound that the escape erupted. 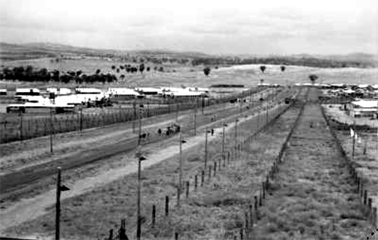 The Italians had fought bravely during the war, but finally had been forced to surrender. Like the soldiers of most armies they saw no lasting disgrace in their surrender, but accepted it as a necessary part of the fortunes of war. They were aware of their rights under the Geneva Convention, and were content to see out the war as prisoners on foreign soil.

The Japanese, however, found the act of surrendering a deeply humiliating experience. Many adopted false names when they were captured so that their brothers-in-arms and families would presume them dead. The Australian guards were aware of the deep-seated unhappiness of the Japanese in B compound, but held no fears of an escape. The Japanese were surly and uncooperative.

The many Italian POWs were, for the most part, cheerful and cooperative and worked agreeably outside the camp and where dispatched to work on farms throughout New South Wales.

Pasquale Dogao was an Italian POW who had been captured in Libya and shipped to Australia in 1941. He was interned at Hay and Cowra POW. Camps. In 1943 he was assigned to work on farm in the Warrumbungle Range. On weekends at nearby Coonabarabran he and other prisoners frequently enjoyed the hospitality of their fellow compatriots, the Lighezzolo family, who had settled in the area.

The POW Identity Card has historic significance as evidence of the events that surround the internment of POWs in Australia in World War II and the experience of the Italian POWs life at Cowra camp, the attitudes of the Italian POWS to the war and internment and their relationships to other POW communities in New South Wales. The Italian agriculture and farming around the camp are evidence of a cultural tradition that was transported with the Italians. The Italian POWS had little interest in participating in the war and were happy to work on farms in the area that surrounded the Cowra camp.

The POW Identity Card provides a research tool for historians to explore the Second World War chapter of Australian history and give the story a wider meaning in the context of the history of migration and settlement in Australia. The material culture of the Cowra POW camp reveals the diverse skills and backgrounds of the people interned there, including their educational and cultural background. Members of the Cowra POW community included Italians, Japanese and Koreans.

The POW Identity Card has intangible significance providing a reminder of the fears felt by the Australian, Italian and Japanese communities of war, the loss of loved ones and the insecurity of war time. POWs and guard’s families have a common link to the place and many local residents have developed a strong attachment to it. Many local residents are collectors and amateur historians carrying out many years of research and documenting the history of the site and the collection. A lot of information still resides in the memories of the Cowra community. The place is a focal point for both Australians of Italian descent and visiting Italian and Japanese nationals.

The POW Identity Card is rare in an Australian collection and that it relates specifically to those particular groups who emerge as significant participants at the Cowra POW Camp and Australia’s World War II history.

The POW Identity Card represents the culture and traditions of the Italian POWs including, the control of labour, internment by ethnicity and experiences and treatment of POWs including finger printing. It is part of a larger collection represents the German. Italian and Japanese experience in Australia during World War II and Australia’s strong historic links to Britain and the adherence to British foreign policy after Federation. The object represents Australia’s fear of subversion during the war and racial antagonism to cultural minorities in wartime. The object represents a time when Australia was moving away from Britain for foreign policy and becoming more confident of its place in the region but still held deep suspicions of non – British immigrants.

The POW Identity Card’s importance lies in its potential to interpret the place as a site associated to POWs and internment, the internment camp itself, the Japanese experience and the contrasting experience of Italian communities, where the Japanese were closely controlled with in the camp, whereas Italians were allowed to lodge with local farmers as labourers.. The object presents the opportunity to interpret the stories of various individuals who were interned at Cowra POW camp and those who were repatriated after the War only to return as migrants and become successful members of the Australian community despite their experiences.