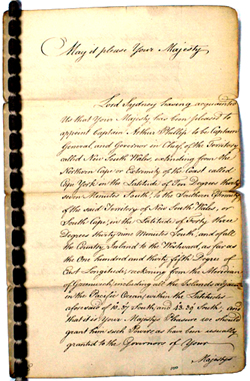 Object Description
The Draught Instructions for Governor Phillip is the first official communication concerning the occupation and settlement of Australia. It empowers Captain Arthur Phillip to establish the first British Colony in Australia and to make grants of land and issue regulations for the Colony. They comprise a type of founding ‘Constitution’ for the new Colony. Paper. Dimensions 330 mm long x 220 mm wide. 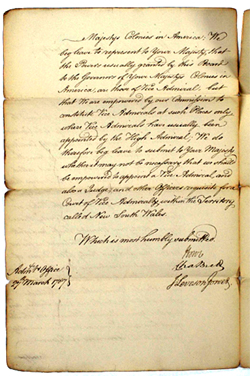 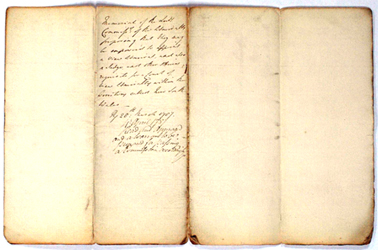 In 1779, Joseph Banks, the botanist who had travelled with Cook to NSW, suggested Australia as an alternative place for transportation. The proposal was repeated later by James Matra, who had also sailed on the Endeavour. The advantages of trade with Asia and the Pacific were also raised, alongside the opportunity NSW offered as a new home for the American loyalists who had supported Britain in the War of Independence. Eventually the British Government settled (although not without criticism) on Botany Bay as the site for a colony. Secretary of State, Lord Sydney, chose Captain Arthur Phillip of the Royal Navy to lead the fleet there and to be the first governor. 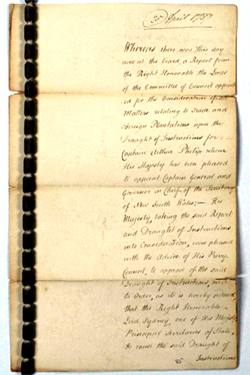 Before his departure for New South Wales, Phillip received his Instructions (composed by Lord Sydney) from King George III, ‘with the advice of his Privy Council’. The first Instructions included Phillip’s Commission as Captain-General and Governor-in-Chief of NSW. This Draught Instructions for Governor Phillip was apparently an amended Commission. It designates the territory of NSW as including ‘all the islands adjacent in the Pacific Ocean’ and running westward to the 135th meridian, that is, about mid-way through the continent. 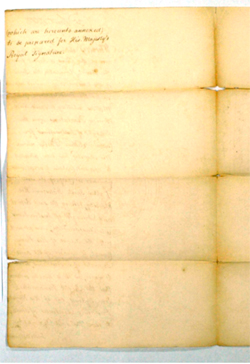 The Instructions advised Phillip about managing the convicts, granting and cultivating the land, and exploring the country. The Aboriginal peoples’ lives and livelihoods were to be protected and friendly relations with them encouraged, but the Instructions make no mention of protecting or even recognising their lands. It was assumed that Australia was ‘terra nullius’, that is, land belonging to no one. This assumption shaped land law and occupation for more than 200 years.1

With this document came British Law, European concepts of land ownership and the political and social structures that would form the institutions and culture of modern Australia.

The original Instructions are not held in any Australian or international collection. The Draught Instructions for Governor Phillip is the only known physical remnant of the original document which set out the constitutional foundation of the Colony under Captain Arthur Phillip. 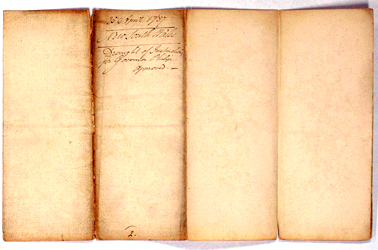 Instructions for Our Trusty George R and well beloved Arthur Phillip Esq. Our Captain General and Governor in Chief, in and over (LS.) Our Territory of New South Wales and its Dependencies, or to the Lieutenant Governor or Commander in Chief of the said Territory for the time being. Given at Our Court at St. James the 25th day of April 1787. In The Twenty Seventh year of Our Reign. With these Our Instructions you will receive Our Commission under Our Great seal constituting and appointing you to be Our Captain General and Governor in Chief of Our Territory called New South Wales extending from the Northern Cape or Extremity of the Coast called Cape York in the Latitude of Ten Degrees thirty seven Minutes south, to the Southern Extremity of the said Territory of New South Wales, or South Cape, in the Latitude of Forty three Degrees Thirty nine Minutes south, and of all the Country Inland to the Westward as far as the One hundred and Thirty fifth Degree of East Longitude, reckoning from the Meridian of Greenwich including all the Islands adjacent in the Pacific – Ocean within the Latitudes aforesaid of 10 º 37′ South, and 43º 39′ and that it is your Majesty’s pleasure we should grant him such powers as have usually been granted to the Governors of your Majesties Colonies in America. We beg leave to represent you Majesty that the powers usual granted by this board to the governors of your Majesty’s Colonies in America, are those of a Vice Admiral, but we are empowered by our commission to constitute Vice Admirals at such places only where Vice Admirals have usually been appointed by the High Admiral; we do therefore beg leave to submit to your majesty whether it may not be necessary, that we shall be empowered to appoint a Vice Admiral, and also a Judge, and other officers requisite for a Court of Vice Admiral with in the Territory called New South Wales.

Whereas there was this day read at this board, a Report from the Right Honourable the Lords of the Committee of Council appointed for the consideration of all matters relating to Trade and Foreign Plantations upon the Draught of Instruction for Captain Arthur Phillip whom his Majesty has been pleased to appoint Captain General and Governor in Chief of the Territory of New South Wales; – His Majesty, taking the said Report and Draught of Instructions into consideration, was pleased with the advice of his Privy Council, to approve of the said Draught Instructions, and to order, as it is hereby ordered that the Right Honorable Lord Sydney, one of his Majesty’s Principle Secretaries of State do cause the said Draught of Instructions (which are hereunto annexed) to be prepared for his Majesty’s Royal Signature.

The Draught Instructions for Governor Phillip is historically significant as it defines the new land of NSW, and formalises Britain’s claim over land that Aboriginal peoples had lived in for over 40,000 years. It also establishes the system of government and political culture of the Colony. It establishes the concept of ‘terra nullius’ that would be the foundation for the dispossession of Aboriginal homeland and pre-empt European settlement of the continent. It is the founding document for the nation.

The document has aesthetic significance in that it is a government document hand written in clear classic Georgian font style in an age before instant printing technology.

These Instructions have considerable research value as they detail how, in a brave experiment, Phillip is to found a colony. Clearly a settlement brief, they allude to the concept of terra nullius, the British assumption that the land can simply be claimed as Britain’s own.

The Draught Instructions for Governor Phillip is of social significance as evidence of the experiment of the First Fleet and the experience of the convicts, army, administrators and Aboriginal peoples in the settlement and dispossession of Australia.

The document is well provenanced to the Public Records Office, London, UK and is in good condition.

The Draught Instructions for Governor Phillip is extremely rare. It is the only draft of Phillip’s instruction in existence. The original instruction that Phillip received upon his Commission as Governor of NSW remains missing.

The Draught Instructions for Governor Phillip provides considerable potential to interpret the themes of British exploration and colonial expansion into the Pacific as well as the achievements of Governor Phillip in carrying out his brief and sustaining the settlement from a rudimentary level to a growing Georgian town. The Draught Instructions provides a tangible link to the official British decree to claim Aboriginal lands and administer them without acknowledgement of prior ownership or use.