Object/Collection Description
The dugout canoe was made by World War I prisoners of war at Berrima Internment Camp. The dugout is made from Australian hardwood, most likely eucalyptus or gum tree from the Berrima internees camp site. It is in fair condition with flaking and fragile wood sections. Dimensions: 5000mm long x 700mm wide x 450mm deep.

The outbreak of fighting in Europe in August 1914 immediately brought Australia into the ‘Great War’. Within one week of the declaration of war all German subjects in Australia were declared ‘enemy aliens’ and were required to report and notify the Government of their address. In February 1915 enemy aliens were interned either voluntarily or on an enforced basis. In New South Wales the principal place of internment was the Holsworthy Military Camp where between 4,000 and 5,000 men were detained. Women and children of German and Austrian descent detained by the British in Asia were interned at Bourke and later Molonglo near Canberra. Former jails were also used. Men were interned at Berrima Gaol (constructed 1840s) and Trial Bay Gaol (constructed 1889). At these camps the internees organised themselves into arts and craft societies and organised large German events and festivals to pass their time and to retain a sense of identity.

The internees also found a welcoming community as some of the families in the area were descended from German settlers who came to the district in the 1840s. Despite the anti-German diatribes from mainstream media the Berrima residents warmed to the internees who purchased bread, meat from local shops and rented houses for their private use, thus bolstering the local economy. The internees helped local residents to rescue animals, fight bush fires and deal with unwanted snakes in their houses. The local residents helped the internees to gain everyday items like bread and meat but commodities such as newspapers were banned. Given the biased nature of the Australian media the internees preferred to get their newspapers from neutral countries. Simmons notes that “there were certainly guardsmen who… came to respect the industry and abilities of their charges and to be friendly towards them”. The daughter of Sergeant Bennetts, a private in the Berrima Guard, tells that a “Sincere respect existed” between guard and internee and on occasions he had to escort an internee to his home for a serious crisis that without exception the guard was made welcome in the home of the internee’s family. 1

In appreciation for the help offered by local residents the internees constructed a pleasure garden, huts and bridges on the Wingecarribee River behind the main village. The river was dammed and named Lake Titicaca. The internees stage large and festive water carnivals on the River and built very well crafted boats and some more bizarre vessels. The gardens and carnivals became renowned though out the area and attracted many visitors on weekends.

Among the craft built for the lake was the dugout Störtebeker, now in the Berrima Museum. Along with the Störtebeker and Attila other craft in the Berrima internee fleet include the sailing boat Miobe and the five oar Ariadne, which, although a dugout and eight meters long had the sleek lines of a racing shell. There were also two large craftsmen built kayak type canoes which despite their sleek lines and smooth varnished surfaces were not very fast on the water. Among the more unusual types of craft was a bicycle boat which had pedals driving a small paddle wheel. The craft was not named as were many other internees’ curious creations made from scrap metal and tubing found in the bush near a disused coal mine in the area. 2 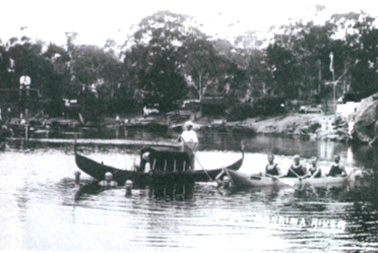 Störtebeker on the Berrima River, c.1914- 18. The Attila is dressed as a gondola beside her. Photograph Courtesy Berrima District Museum

The Canoe Störtebeker is a part of a collection of objects integral to the fabric of the Berrima Gaol heritage site and provides the distinctive character of the place. Its primary significance lies in its relationship to the themes of wartime internment experience, racial antagonism and fear of subversion and Australia’s links to and following of Britain’s wartime foreign policies after Federation. The Collection interprets the story and provides evidence of the experience of the German internee’s life at Berrima Gaol, the attitudes of the German internees to the war and internment and their relationships to other German communities in New South Wales both interned and free. The boats, models and floats the internees made reflect their strong sense of community, boredom & hobbies and activities to fill in time.

The canoe provides a research tool for historians to explore the First World War chapter of Australian history and give the story a wider meaning in the context of the history of migration and settlement of Australia. The material culture of the Berrima Internee Collection reveals the diverse skills and backgrounds of the people interned there, including their educational and cultural background. Members of the Berrima internee community included ships officers, engineers, navigators and seamen. The objects they produced and used that remain in the collection reflect this diversity. An object such as the canoe also displays the level of expertise of the internees and also the amount of time they invested in to craft activities to keep themselves occupied and in good spirits. It appears that unlike Trial Bay and Holsworthy the internees at Berrima were, generally, cheerful and optimistic. This could be explained by the mercantile background of the internee’s background and the traditionally long periods spent away from home.

There is substantial social value in the object as material culture and fabric of a site associated with internment. Internees’ and guards’ families have a common link to the place and many local residents have developed a strong attachment to the place. Many local residents are collectors and amateur historians carrying out many years of research and documenting the history of the site and the Collection. A lot of information still resides in the memories of the Berrima community. The place is a focal point for both Australians of German decent and visiting German nationals. The canoe has a strong link to the community as its recovery and conservation became the focus for the local community and holds pride of place in the Berrima Museum as an inherently German object from World War Ie. Berrima Museum has undertaken substantial research on the object.

The canoe is well provenanced to the site. After the war in 1919 it was, along with many other craft ceremoniously sunk in the Wingecarribee River. Following a flood in 1978 it was discovered half buried in the riverbank. It was salvaged and placed in Berrima Museum where it remains on permanent display.

The Berrima Internee Collection is rare in that it relates specifically to the German internee occupation of the site and it is associated with those particular people who emerge as significant participants in World War I internment camp history.

The canoe represents the culture and traditions of the German internees. It bears similarities with the model planes and toys of the internees of the Trial Bay camp. This object shows a strong eye for accuracy and detail and a represent a symbol of German internee’s patriotism and defiance as prisoners. The canoe, as part of a larger collection represents Australia’s strong historic links to Britain and the adherence to British foreign policy after Federation. The Collection represents Australia’s fear of subversion during the war and racial antagonism to cultural minorities in war time. The collection represents a time when Australia still looked to Britain for foreign policy and held deep suspicions of non-British immigrants. This is evidenced in the concentration camp nature of the internment, the isolation of the place, the boredom that resulted in the detailed and precise immaculate models and toy furniture.

The condition of the canoe is fair to good. It is significant that such an object remains in good condition at the place where it has an historical association.

The canoe’s importance lies in its potential to interpret the place as a site associated to internment, the internment camp itself and the experience of German communities. The Collection presents the opportunity to interpret the stories of various individuals who were interned at Berrima Gaol and those who returned to Germany after the War only to return as immigrants and become successful members of the Australian community despite their experiences.