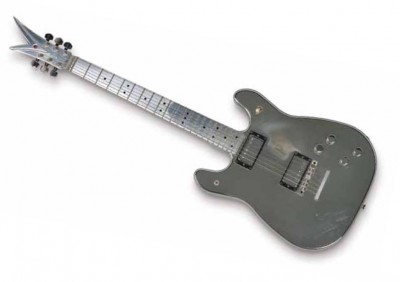 Object/Collection Description
Object Description: Electric guitar with carry case and accessories, used by the performer Ed Kuepper, in his solo career and in bands such as the Saints and The Laughing Clowns. All aluminium electric 6 string guitar, machined out of 2 solid pieces of aluminium screwed together to form the front and back of the guitar. The headstock is cut away in shape of a stylised “V” for “Veleno”. Manufacturing information is engraved in to the back of the headstock: “Veleno Instrument Co”. Dimensions: 37mm high X 323mm wide X 1100mm high.

Ed Kuepper was born in Bremen, West Germany in 1956. His parents immigrated to Australia when he was about three years old, settling in the south-west suburbs of Brisbane. The suburb he lived in, Oxley, is far from the heart of the city and it’s the kind of place where people live because it is close to the place they work and low cost housing. It is close to the industrial areas of Brisbane and is surrounded today by golf courses. It is also on Oxley Creek, a feature in Ed’s work for decades to come.

School was reputedly not fun for Ed in the early years, being subject to racist taunts from the local students, and it’s unquestionable that he would take the role of the outsider in many of his narratives later on. At school he met fellow migrant Chris Bailey.

Chris Bailey was born in Nanyuki, Kenya in 1957. They left Africa early in Chris’ life and his parents dragged him and “the brood” all over the place – including their native Northern Ireland – before finally settling in Brisbane when he was around ten years old. His home suburb, Inala, was a housing-commission estate filled with welfare and low-income families, aborigines and other migrants. It too was miles from the city, and was close to Oxley Creek.

Ed and Chris linked up early at school the pair soon found they had similar interests in music and politics.

Ed had been playing guitar since the age of thirteen and kicking around with friends, playing and singing. Kuepper preferred Bailey singing, believing that a guitarist and songwriter could stay in the shadow while the singer up front could get all the attention. This suited Bailey fine – “Any rock band worth its salt has the local loony on lead vocals. That was the role I performed,” he says.

In 1972, they would meet Ivor Hay, from the nearby Corinda. The three of them would form a band almost immediately, taking the name Kid Galahad and the Eternals. In 1974 the band would rename itself the Saints, which was chosen for a good gang-style ring to it, as well as echoing the fifties garage bands.

Eventually the band would get a bass player Kym Bradshaw, and the band booked time at Bruce Windows Studios. It had occurred to Kuepper one day that if he simply called Astor Records – where he had been working in the warehouse – and asked, they may actually press a record for him. They replied that country artists did it all the time.

Booking two hours at the studio with Mark Moffat producing, the band recorded “(I’m) Stranded” and “No time”. The track remains to this day one of the best pieces of punk ever recorded. Bailey’s lyrics are simple, yet very effective.

The master tape was taken to Astor, who pressed the single on the Saints’ own Fatal Records label. Kuepper then spent some time mailing them to record companies and journalists around the world.

When the record was heard in the UK – warming quickly to the throes of punk – it would be received with thick hyperbole. Sounds magazine would make it’s famous quote: “The single of this and every week.” it was proclaimed. “The Quo or Ramones? This pounds them into the dirt.” The band, previously ignored by everyone on the face of the earth, suddenly became hot property. The London office of EMI issued orders for the Sydney office to sign the group.

The band spent a whole weekend in the studio to record the album known as “(I’m) Stranded”. The album’s sound is a roaring, rock-and-roll fuelled blast of arrogance and nihilism, but is underlined with a hidden sensitivity and even subtlety. No matter what the Saints may have thought of the Sex Pistols, there is an undeniable link in the relationships between rage and hurt expressed on both albums and the timeliness in the appearance of both bands. The common themes of expatriate Irishmen weave through both records.

In January 1977 the Saints celebrated the release of the album. The band relocated to Sydney feeling Brisbane was far too small for them, and they got gigs supporting the equally infamous and unwanted Radio Birdman. Even the Birdman fans disliked them, especially when Bailey drew parallels between the bands iconography and Nazism while on stage. Bailey says there was not a lot of kinship between the bands at the time. Kuepper has frequently displayed distaste for ‘nationalistic’ type symbols, which Birdman embraced.

The Saints, however, found Sydney as constricting as Brisbane and no more open minded, the band moved to England.

The end of May 1977 saw them arrive in London and be greeted by the wave of punk hysteria. While the British music press saw punk as the rawest, most honest music possible, the Saints saw it as a hype machine, commercialism using image and reputation to sell them, rather than their music or particular stance.

Their first London show was a large one. June 5th and 6th saw them play the Roundhouse supporting the Ramones and Talking Heads – two bands that had made a name in New York years before punk had hit Britain. Despite the fact the Saints predated the Ramones, they were hit with the view they were nothing more than cheap imitators.

The recording of the second album ‘Eternally Yours’ was a different matter to the first. With access to better equipment and a much larger budget, the band experimented with different sounds, styles and arrangements and Bailey and Kuepper produced it themselves.
Horns featured on several tracks, blasting the classic Kuepper riff of “Know your product” into less safe R&B territory. It was one of the best singles of the era, but it would go unnoticed. The horns would also show up on Kuepper’s sarcastic “Orstralia”.

The record company looked on unimpressed when the band played it to them. “Know your product” was chosen as the single and released in February after the band had toured to support it. It was a commercial failure. The band was as impressed with the company as the company was with them.

In early 1978, Chris Bailey was suffering from disenchantment from the whole situation and wanted to quit. Kuepper, who had been writing at a pace that would later make him legendarily prolific, would convince Bailey to return and continue recording. He was worried if EMI discovered the band had lost the vocalist, they would cancel the next album.

Gone completely was the earlier buzz saw sound of Brisbane, and in its place was a complex and widely influenced, highly musical album. “Swing for the crime” is an almost perfect blend of Celtic drumming, horns, riffing and Bailey’s much more open, unimpaired vocal. He was almost singing. The words fit the melodies almost perfectly for the first time with a complex collection of characters and poetic style.

Kuepper’s song writing would take a step up with this album as well. “Brisbane (Security City)” could have popped up in its whole form on any of his later solo albums. A much more cerebral and musical version of “Orstralia”, it attacked his adopted home’s political complacency and police harassment.

EMI chose “Security” backed with “All times through paradise” as the single. Both single and album flopped, without Prehistoric Sounds even being released in the United States. It is still difficult to find today, rumoured to be deleted from CD by EMI not long after re-release. After the album failed, EMI chose not to take up the option on the band’s contract.

Chris Carr of the NME made advances on behalf of the band to EG Records. A single was arranged with plans for “Laughing Clowns” to be the A-side and “On the Waterfront” to be the B-side. Kuepper was trying to move into far jazzier territory, however, and Bailey was looking to make a pop-rock statement, the two declined the offer to make another go together.

The Laughing Clowns were put together in Brisbane by Kuepper when he returned to Australia in 1979, and Bailey would release “On the waterfront” on the “Paralytic tonight, Dublin tomorrow” EP in 1980.

After the release of 1980′s “Paralytic tonight, Dublin tomorrow” EP, Kuepper would be rankled with Bailey using the Saints name with a band that he saw as being his own. In 2005 the original Saints performed a one off show at the Fox Studios in Sydney. The original line performed again at the Queensland Music Festival July 14th 2007. 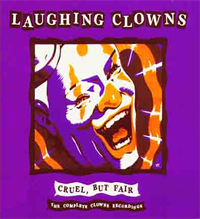 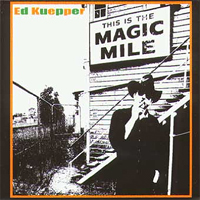 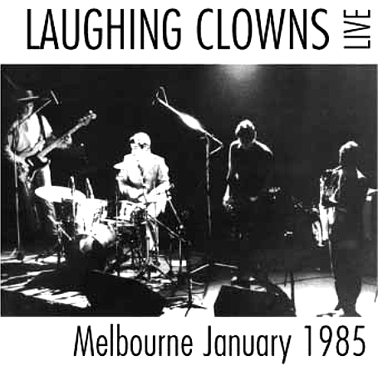 The guitar has historic significance as the guitar Ed Kuepper used this guitar in his solo career, and prior to this in the bands The Saints and the Laughing Clowns. Both of these bands were extremely influential on the Australian music scene in the late 1970s and early 1980s. The guitar was bought by Ed Kuepper in 1977 in the U.K. Ed Kuepper is one of the most influential and successful singer/songwriters on the independent rock music circuit in the country.

The guitar has aesthetic significance as the guitar is an unusual all aluminium electric 6 string guitar, machined out of 2 solid pieces of aluminium. The neck and headstock are also made from single piece of aluminium which is bolted onto the body. The body has a highly polished finish.

The guitar is extremely rare, both in terms of material culture related to Australian 70s culture and as an example of a rare Valeno aluminium guitars.

The guitar represents a time when migrants left the migrant camps to face isolation and racist discrimination. Unlike the Easy Beats experience with their widely accepted British Beat sound, the non British migrant outsiders such as Bailey and Kuepper created music that reflected their isolated experience in the suburbs of Brisbane and Sydney. These influences created a distinctive 1970s Australian sound of nihilism and isolation that would find a resonance on the international music scene. The guitar also represents the Australian invasion into the international independent music scene.

The interpretive potential of the guitar is considerable. The guitar is a symbol of youth subversive subculture and Australian rock music.