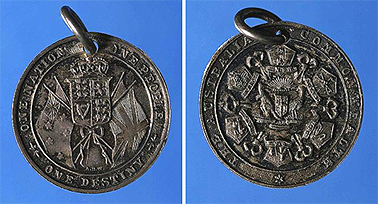 Before 1900, there was no actual country called Australia, there were six colonies of New South Wales, South Australia, Victoria, Queensland, and Western Australia that existed on the Australian continent and Tasmania the island colony. While the six colonies were on the same continent they were governed like six separate countries. Up until the 1880s, there was limited interest in the idea of uniting the colonies into one country and the influential businessmen in the colonies seemed more interested in protecting their own economic interests. Things began to change in the 1890s. There was a severe drought that resulted in violent industrial strikes. By 1888, 70% of people in Australia had been born here and there was a growing nationalist sentiment. Communication had improved and all the colonies were linked to each other and the world by the overland telegraph and submarine telegraph. Germany, France and Russia were expanding in the Pacific and the colonies could better defend themselves with a single army and navy. Thousands of Chinese migrants came to Australia during the gold rush. People wanted to restrict the economic competition of migrants from Asia. The best way to do this was for all the colonies to act together and work out a common immigration policy. 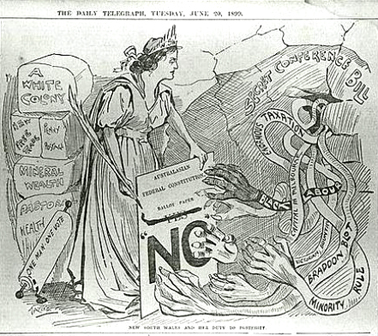 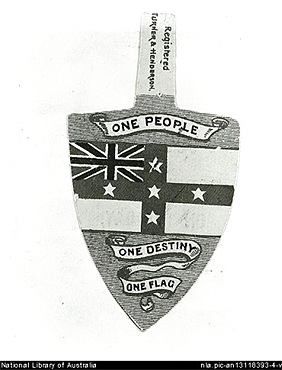 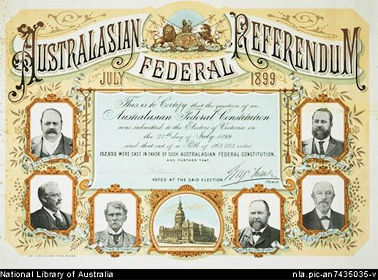 In 1901, 98% of people in Australia were white. Australia wanted to remain a country of white people who lived by British customs. Trade unions were keen to prevent labour competition from Chinese and Pacific Islander migrants who they feared would undercut wages. One of the first pieces of legislation passed in the new Federal Parliament was the Immigration Restriction Act. Now known as the infamous White Australia policy it made it virtually impossible for Asians and Pacific Islanders to migrate to Australia. This Act stated that if a person wanted to migrate to Australia they had to be given a dictation test. The dictation test could be in any European language. So a person from China or Japan who wanted to live in Australia could be tested in one or all of French, Italian or English languages. In 1905, the Act was changed so it could be given in any language at all. Of course, most Asians failed the tests and were not allowed to migrate to Australia unless they were able to enter the country under very strict exclusion rules and fortunate enough to have well connected sponsors who provided work and lodgings.

The Federation of the colonies in 1901 to form the Commonwealth of Australia was an occasion for celebration and national pride. The grand ceremony in Centennial Park drew many thousands of people who shared the same view- one nation, one people and one destiny. Numerous medals were produced, often to be worn at special Federation events especially the grand ceremony. This medal is made from enamelled silver; others were made from gold, copper or tin. 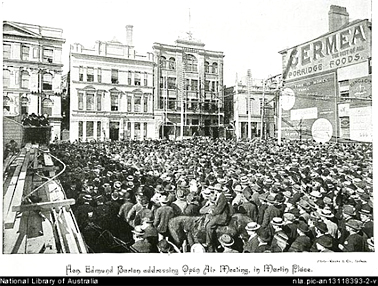 The medal has historical Significance because it has direct links to the Federation of the Australian Colonies and the drafting of the first Australian Constitution that formed the first Federal Governments policy on immigration legislation and the formation of the ‘White Australia Policy’.

The medal has intnagible Significance for some migrant communities especially Chinese and Pacific Islanders who were largely the target of the racist nature of the Immigration Restriction Acts in the Australian Constitution.

The medal is in the collection of the National Library. The medal was displayed in the Anzac Spirit exhibition at the Australian War Memorial between 2001 and 2007.

The medal has the potential to interpret the main themes of Federation. This is namely the federation of the six Australian Colonies and the formulation of the Federal laws that governed immigration, customs, defence, trade, taxation and finance and industrial relations and the creation of a new Australian nation in 1901. The medal has the potential to interpret the racist attitudes to Asians and Pacific Islanders and the subsequent laws and polices adopted by the early Federal governments to restrict these groups migration and work in Australia. These issues still have resonance in Australia’s contemporary political culture. Immigration, race and multiculturalism still stir much emotional debate. A conservative party has taken a part of the Federation slogan ‘One Nation’ as their name.