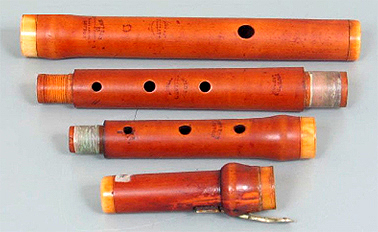 The flute has appeared in many different forms in many different locations around the world. A three-hole flute made from a mammoth tusk, from the Geißenklösterle cave in the German Swabian Alb and dated to 30,000 to 37,000 years ago, plus two flutes made from swan’s bones excavated a decade earlier from the same cave in Germany, dated to circa 36,000 years ago are among the oldest known musical instruments. A bone fragment of the femur of a juvenile cave bear with two to four holes found at Divje Babe in Slovenia and dated to about 43,100 years ago may also be an early flute. Some early flutes were made out of tibias (shin bones). Playable 8000-year-old Gudi (bone flute), made from the wing bones of red-crowned cranes, with from five to eight holes each, were also excavated from a tomb in Jiahu, in the Central Chinese province of Henan.

During the 16th and early 17th centuries in Europe, the transverse flute was available in several different sizes, in effect forming a “consort” much in the same way that recorders and other instrument families were used in consorts. At this stage, the transverse flute was usually made in one section (or two for the larger sizes) and had a cylindrical bore. As a result, the flute had a rather soft sound and limited range, and was used primarily in compositions for the “soft consort”.

With the advent of the Baroque (17th and 18th centuries), the transverse flute was re-designed. Now often called the traverso (from the Italian), it was made in three or four sections, or joints, with a conical bore from the head joint down. The conical bore design gave the instrument a wider range and a more penetrating sound, without sacrificing the softer, expressive qualities of the instrument. In addition to chamber music, the traverso began to be used in orchestral music, eventually occupying an exalted status amongst the woodwinds. Many composers, such as Frenchmen Joseph Bodin de Boismortier, Michel Corrette and Michel Blavet, Italians Antonio Vivaldi and Pietro Locatelli, and Germans Georg Phillipp Telemann and Johann Joachim Quantz, wrote significant collections of sonatas and chamber works for the traverso. Quantz also wrote an important treatise on the flute and its performance practice. Johann Sebastian Bach also contributed to the literature of the flute with his Sonatas for Flute and Continuo BWV 1034-35 and the Partita BWV 1013.

The Irish flute is a colloquial name for a wooden flute used in the playing of Irish traditional music. Sometimes the term is also used to distinguish keyless, diatonic, simple system flutes from 19th century flutes which played a diatonic scale by successively uncovering the tone holes but were made chromatic by the addition of metal keys. Some musicians consider the term “Irish flute” to be a misnomer, as the instrument is just a development of the older, simple system flutes, and is used in a wide variety of music, including Scottish music, Breton music, and others. 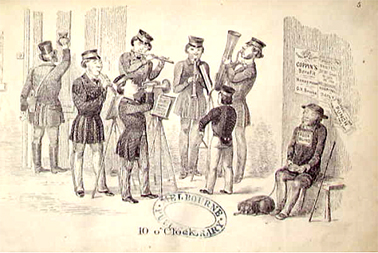 Irish flutes were originally old English simple system flutes that were discarded by concert musicians during the advent of the modern, Boehm system, Western concert flute in the late 1800s. These “obsolete” flutes were picked up at low cost by Irish traditional musicians. Today, Irish flutes are being made expressly for the playing of Irish traditional music by many makers. These modern Irish flutes often have few, if any keys, which is one difference between them and their predecessors, which had anywhere from 5-10 keys in addition to the standard six open holes.

European music came to Australia on the First Fleet. Music making has a long maritime tradition and would certainly have been played by the members of the New South Wales Corps and some of the convicts themselves. Sydney colony in 1788 was a very rudimentary society and the local inhabitants entertained themselves with satirical ditties and traditional English peasant folk music on the violin, lute and flute. As the colony developed from a penal colony to a flourishing economic centre, so did the levels of sophistication of the culture. By the 1830s the colony had been transformed under the reforms and vision of Macquarie. Members of colonial society build large town houses surrounding the harbour and held dinners and parties that featured concerts to entertain the guest. The first instruments were imported or brought in with migrants. After the 1830s instruments were manufactured and sold locally.

Francis Ellard came to Australia from Dublin in 1832 and soon established, for the most part,  a thriving instrument retailing business. After establishing his business in Adelaide Place, Hunter Street he later moved to George Street, next to the silversmith Alexander Dick. After Dick’s death, Ellard married his widow in 1846. Ellard, also a musician and publisher of sheet music, and his family were intimately involved in the musical life of Sydney until his death at his Pitt Street residence on 10th July 1854.

This flute is one of the earliest musical instruments known to have been sold in Australia and helps in building up examples of evidence of early retailing and musical life of Sydney prior to 1850.

The instrument bears the stamp of London maker Hermann Wrede who had his premises at 35 Lr White Cross, Cripplegate between 1837 and 1840. The address is also stamped on the flute. Other examples of Wrede’s instruments such as flutes and clarinets are found in various museum collections such as the National Music Museum, South Dakota USA and the Horniman Museum, London.

The flute has historic significance as evidence of one of the earliest musical instrument dealers known to have operated in Sydney from his arrival in the colony in 1832 until his death in 1854. He is known to have sold numerous types of instruments including flutes and pianos. Francis Ellard’s family comprised singers, musicians and composers and were involved in the musical life of Sydney during the 1830s and 1840s.

The flute has aesthetic significance in the simple functional design of an early ‘old English’ style boxwood flute that was typical of the time.

The flute has intangible significance as an object that symbolises the coming of European culture to an ancient landscape and the remaking of the country to a European world view.

The flute is well provenanced. It was purchased by the Powerhouse Museum in 2004 and has remained in the collection ever since.

The flute is extremely rare, both in terms of early musical instruments and material culture related to Australia’s early colonial period.

The flute represents a time when migrants were importing musical influences for all part of the world.

The flute is in good condition.

The potential of the flute to interpret early colonial life in Sydney is considerable. The flute is evidence of the changing economic conditions, the changing aspiration values of early colonial society and the growth of the middle class that developed the colony into the liberal democratic society we live in today.