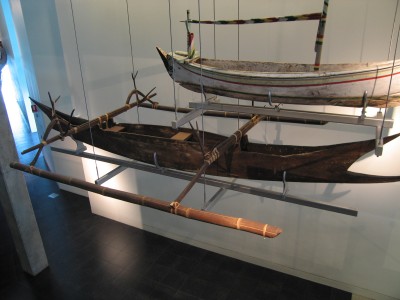 Object description
A basic dugout canoe constructed in an ancient and universal style called the ‘5 part canoe’. It is constructed from a basic dugout canoe with side floats called outriggers with cross spars and an forked timber pieces holding them in place. This canoe is a fishing canoe probably originating from North Sulawesi or the neighbouring islands of Sangir or Talaud.

The outrigger significantly increases the stability of the canoe. Compared to other types of canoes the outrigger can be quite fast and capable of being paddled and sailed in rougher water and the open ocean. The paddling technique differs greatly from kayaking or rowing. The paddle is single sided and an experienced paddler will only paddle on one side, using a technique such as a ‘J-stroke’ to maintain direction and stability

Out rigger canoes carried people migrating and travelling from mainland Asia, the islands of South East Asia and across the Pacific and Indian Oceans. People sailing across the Indian Ocean have introduced new culture, technology and materials to North West Australia for the past 2000 years.

Australia is one of the largest and remote islands of the world. It is separated from the rest of the world by expansive oceans from Africa to the west, South America to the east, Antarctica to the south and South East Asia to the north. The first humans migrated to Australia over 60,000 years ago over the thin land bridges across the Torrez Strait. These people were the ancestors of the first Aboriginal people. This was around the time the first Americans were crossing the Bering Strait land bridge connecting Siberia to Alaska.

The migrating Aboriginal people eventually colonised the entire coast of Australia, then moved inland to every part of the continent to establish a unique myriad of cultures and economic systems. From the Torres Island in the north across the mainland to Tasmania in the south, Aboriginal communities developed subsistence economies exploiting their understanding of the environment and its natural resources. The Tiwi of Bathurst Island and the Bardis of the Kimberly excelled at this and have maintained their culture til present day.

As the Torrez Strait land bridge flooded with the rising seas at the end of the last ice age about 10,000 years ago, Aboriginal people developed bark canoes for fishing and transport but these were too flimsy for open ocean journeys. So for millennia Aboriginal people were isolated on mainland of Australia and Tasmania. About 2000 years ago the first Macassan trepang fisherman began arriving in the Kimberly in north west Australia on outrigger canoes. The Macassans came to harvest trepang and other sea animals to sell to the markets in Asia and China thus creating Australia’s first foreign trade.

Aboriginal people traded with the Macassans and there is evidence that Aboriginal men worked on the Macassan fishing boats travelling to Ujungpandang in Indonesia absorbing influences and ideas along the way. The open ocean was no longer a physical or intellectual barrier thanks to the outrigger technology introduced by the Macassans. 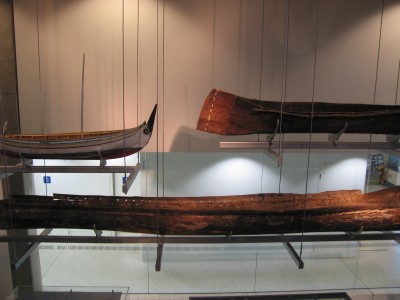 The outrigger canoe has historic significance as evidence of Austronesian and Aboriginal people’s use of dugout outrigger technology to migrate and travel from South East Asia to the Indian & Pacific regions for past 2000 years. This movement of people across the region has been the catalyst for new culture, technology and material between North West Australia and Asia long before the coming of Europeans.