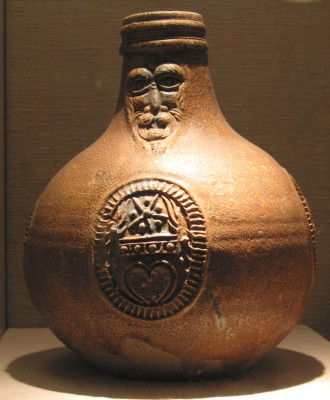 Object Description
A collection of objects excavated from the repackage of the Dutch vessel Vergulde Draeck that ran aground of the western Australian Coast in 1656. The collection includes beardman jugs, ceramic masks and medallions, clay tobacco pipes, bronze and brass utensils, tools and accessories, glass bottles, a tool-box, various armaments and much organic material.

The most significant exploration of Australia in the 1600s was by the Dutch and is inextricably linked with the expansion of the powerful Dutch East India Company, the Verenigde Oostindische Compagnie (VOC). The VOC established a trade network throughout Asia seeking rare spices, exotic textiles and new markets for their goods. Trade between Europe and Asia was a profitable enterprise.

Fuelled by the growing myths about the treasures which awaited them in the huge unknown continent in the South, the VOC equipped several expeditions in their search for profit. However, instead of wealth, the VOC found tragedy when the first ships were wrecked on the dangerous west coast of Australia.

The Dutch East India Company traded extensively with the islands which now form parts of Indonesia, and hence were very close to Australia already. Some Dutch explorers include Dirk Hartog who landed on the Western Australian coast, leaving behind a pewter plate engraved with the date of his landing, and Abel Tasman for whom Tasmania was eventually named — he originally called it Van Diemen’s Land after a senior member of the Dutch East India Company. Maps from this period and the early 18th century often have Australia marked as “New Holland” on account of the voyages of these Dutch explorers.

On 4 October 1655 the VOC ship Vergulde Draeck of the Amsterdam Chamber sailed from Texel in the Netherlands on her second voyage bound for the East Indies (now Indonesia). She was carrying, apart from passengers and crew, cargo, trade goods and silver coins worth 185,000 guilders. She reached the Cape of Good Hope on 9 March 1656 and four days later set sail for Batavia. She never reached her destination.

Following the Brouwer route via the Roaring Forties east from the Cape of Good Hope but then miscalculating his east longitude Captain Pieter Albertszoon drove the Vergulde Draeck onto a reef off the western coast of the Southland between Seabird and Ledge Point in Western Australia on 28 April 1656. The reef ripped the Vergulde Draeck open and only a few provisions were saved.

With the 75 survivors onshore Albertszoon sent a party to Batavia, in the one small boat which had been saved from the wreck to seek rescue.

Albertszoon decided to stay with the survivors and to appoint his second officer Abraham Leeman van Santwitz to lead the rescue party. He was probably influenced in his decision by the events following the wrecking of the Batavia on the Abrolhos Islands some 27 years earlier. On that occasion senior officers abandoned the survivors to sail to Batavia, leaving many survivors to be killed by mutineers.

Copy of the map of Rottenest Island made by Samuel Volckersen, master of the Wakende Boei, during the search for the Vergulde Draeck, 1658, probably taken from de Vlamingh. Courtesy of the Western Australian Maritime Museum.

It is remarkable that such a large number of people, which by this time had possibly increased to 79 with the 11 from the Goede Hoop, just disappeared.

The English translation, in 1859 and 1899, of the documents relating to the Vergulde Draeck drove speculation of whereabouts of the vessel. In 1931 A. Edwards discovered 40 silver coins in the sand hills just north of Cape Leschenault. The wreck was not found until 14th April 1963 by a group of spear fishermen.

Following the discovery of the wreck, an African elephant tusk and some ballast bricks were recovered. The wreck site was not protected at this time and the information on the artefacts raised can only be gleaned through newspaper articles of the time. Blasting at the site prompted the State Government to pass the Museum Amendment Act 1964 making the Western Australian Maritime Museum custodians of the site.

The site was vulnerable to Indian Ocean swells making any work undertaken on Vergulde Draeck hazardous. In 1972 a full expedition was organised to methodologically excavate the remains of the cargo and ship’s fittings. Little remained of the wood structure and the site had been vandalised by looters. Over several months many objects were excavated creating the collection on display at the Shipwreck Museum of the Western Australian Maritime Museum.