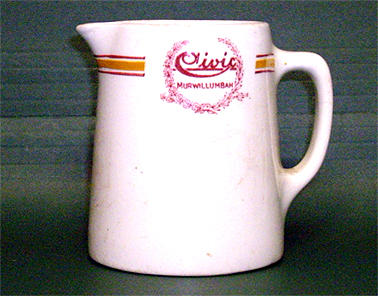 Object Description
Ivory glazed earthenware milk jug, c. late 1940s. The milk jug has an orange stripe approximately 2mm wide around the outside at the level of the base of the pouring spout, with narrow purple stripes above and below. There is a tapering red stripe on the handle. The stripes around the jug are broken by a semi circular red garland, with the words ‘Civic Murwillumbah’ within it. On the base is the maker’s mark: ‘Duraline” Super Vitrified Grindley Hotel Ware Co England’, and the name of the importer: ‘Gibson and Paterson Pty Ltd Sydney’. Dimensions: height 84 mm, rim diameter 60 mm, base diameter 70 mm.

This milk jug from the Civic café in Murwillumbah was manufactured by Grindley Hotel Ware Co. in England. Grindley and Co. were well known British pottery manufacturers based in Staffordshire. Staffordshire became the centre of pottery manufacture in England by 1730, and a century later it was established as an international centre, exporting its products around the world. The development of the canal network across Britain in the second half of the eighteenth century, followed by the advent of the railway in the 1840s, opened up the local ceramics industry to world markets.

W. H. Grindley and Co was founded by William Harry Grindley in 1880 in Tunstall, Stoke on Trent, Staffordshire. The company manufactured earthenware and ironstone China, particularly for the Canadian, American, South American and Australian markets. In 1960 the business was purchased by Alfred Clough Pty Ltd and in 1978 it was renamed Grindley of Stoke (Ceramics) Ltd. In 1991 the Company was taken over by Woodlands Pottery. The jug has the trademark ‘Duraline’ on the base. Grindley and Co. used this trademark from about 1946 onwards, so the milk jug was manufactured after this date.

The milk jug was used at the Greek owned Civic Café in Murwillumbah. Greek immigrants came to Australia in relatively small numbers from the 1850s, mainly working as gold miners and waterfront workers. By the end of the nineteenth century they moved into a range of occupations, many becoming owners or lessees of shops and restaurants. In the early twentieth century the numbers of Greeks in Australia expanded greatly due to chain migration of families. The majority came from the Ionian and Agean islands; Kythera and Ithaca were the islands of origin of many Greeks who migrated to New South Wales. Bringing the Greek tradition of the coffee house or Kafeneion to Australia, they established cafes, restaurants and fish shops. Greek migrants took the oyster saloon craze of the 1890s and over the first few decades of the twentieth century turned it into the milk bars and cafes that came to be a feature of country towns across New South Wales and other states. There are many stories of young men who arrived in Australia one day, with few possessions, little money and little or no English, and the next day would be working in a country town cafe owned by a relative. Through long hours of hard work Greek families established successful businesses and built up social and support networks with their compatriots in neighbouring towns. They also contributed to their local community, donating to charities and providing food to the needy in times of crisis such as flood or bushfire.

The Civic Café was established in 1938 or 1939 by Mark Cassimatis. A native of Kythera, Cassimatis arrived in Australia in 1928 at the age of 14 to join his father, Minas (Mick) Cassimatis, and uncle, Peter Stathis, in Lismore. Soon after Mark opened the Civic Café, his father and uncle joined him in Murwillumbah. They managed the café during the war while Mark was away serving in the armed forces.

In late 1940 Mark gave the Civic a substantial makeover. The cafe reopened with great fanfare, generating a profit of over £50 that was donated to the Red Cross and the Country Women’s Association. It had air conditioning and was modelled on Angelo Crethar’s well-known cafe in Lismore, where queues lined the street in summer. The Civic laid claim to the longest counter on the north coast, accommodating the soda fountain and display and cold storage units for all sorts of delicatessen items, ice creams and fruit drinks. Mark Cassimatis also claimed that his café offered the greatest privacy anywhere; the seating was divided into high backed cubicles accommodating six. The modernised café featured the latest in neon and illuminated signs, together with a curved glass frontage like the Austral. Together with the Austral and the Belle Vue, the Civic was one of the most popular upmarket establishments in Murwillumbah during the war years. It provided a similar range of fare to other cafes, including light lunches, three course meals, grills, and ice cream, sundaes, malted milks, milk shakes and cool fruit drinks from the milk bar. Despite war time rationing and restricted trading hours, American servicemen on R and R in Tweed Heads provided plenty of custom. Australian milk bars were familiar places to them, modelled as they were on the latest American trends in décor and service.

Mick Cassimatis died in 1951, aged 74, and Mark continued in partnership with Peter. They traded as Stathis & Cassimatis for many years, until Peter’s death in around 1964. Mark Cassimatis sold the Civic Café in 1970 and moved to Brisbane.

This milk jug, produced by commercial hotel ware manufacturers Grindley and Co in the late 1940s, was used in the Civic Café in Murwillumbah. The Civic Café was established in 1938 or 1939 by Mark Cassimatis. Mark ran the café in partnership with his father and uncle until their deaths, then continued in business alone. He sold the Civic in 1970 and moved to Brisbane.

The Civic café milk jug derives historic significance from its association with the Greek owned Civic Café in Murwillumbah. The fact that the Civic Café remained in the Cassimatis family for over 30 years reflects the long hours of hard work, solidarity and close family connections that made Greek businesses in New South Wales country towns successful.

The Civic café milk jug has social significance for the many customers who visited the Civic café to meet friends over a cup of tea, bringing back memories of the leisure hours they spent there. It brings back memories for the family members and others who worked in the café for long hours, waiting on tables, preparing and cooking food, washing up, cleaning the kitchen and doing the many other tasks involved in running a café.

The Civic café milk jug has interpretive significance in conveying the contribution that Greek migrants have made to the economic development and social life of the Murwillumbah community.

Tsicalas, Peter 2003, Greeks and other Aliens of the Tweed and Brunswick, self published, Murwillumbah.