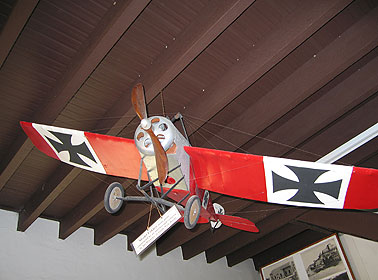 Object/ Collection Description
The model of the Fokker Eindecker comprises an original aero frame made by an internee at Trial Bay. The model was substantial rebuilt by the local donor and retired aeronautical engineer after an earlier attempted left it in pieces. It is made from a steel frame with its wings and fuselage covered by fine cotton and genuine aero dope. The original Irish linen had virtually rotted away. It is painted red with the German Maltese Cross insignia of the infamous German fighter Ace, the Red Baron by Kim Hogno, a sign writer from South West Rocks based on a book on models from the USA. The propeller is made from laminated soft wood or marine ply and the engine cowling is made from sheet metal. The stabiliser fins are made from soft wood. The under carriage in made from steel with rubber wheels.

The condition of the object is fair to good. There is evidence of marine salt/ dust related corrosion on the sheet metal cowling and exposed aero frame. It is significant that such a collection remains in good condition, intact and at the place it has an historical association. Dimensions: 1500 mm long x 2000 mm wide x 500mm high.

The outbreak of fighting in Europe in August 1914 immediately brought Australia into the Great War. Within one week of the declaration of war all German subjects in Australia were declared ‘enemy aliens’ and were required to report to the Government. In February 1915 enemy aliens were interned either voluntarily or on an enforced basis. In New South Wales the principal place of internment was the Holsworthy Military Camp where between 4000 and 5000 men were detained. Women and children of German and Austrian descent, detained by the British in Asia, were interned first at Bourke and later at Molonglo, near Canberra. Former jails were also used. Men were interned at Berrima Gaol (constructed 1840s) and Trial Bay Gaol (constructed 1889). 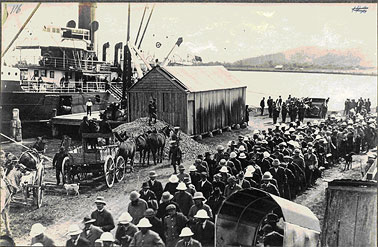 The internees at Trial Bay Gaol created management committees to organise entertainment, sport, culture and arts activities. An internee attached to an art club at the camp made the model of the Fokker aircraft Eindecker, which is part of a wider collection of objects used by the internees. This collection, which is part of the distinctive character of the Trial Bay Gaol heritage site, is primarily significant for its relationship to the themes of wartime internment experience — racial antagonism, fear of subversion — and for showing how Australia followed Britain’s wartime foreign policies, even after Federation.

The Eindecker model is historically significant as evidence the experiences of German and activities of internees at Trial Bay during World War One. The models and doll furniture made for Christmas presents reflect not only the activities devised to fill in the long, unstructured days but also the internees’ longing for their families and children.

The Eindecker model has aesthetic significance and reinforces the fact that the internee community, which was educated and cultured, included wealthy industrialists, doctors, academics, publishers, professionals and entrepreneurs. The objects they produced reflect this diversity, their level of expertise and also the amount of time they invested in craft activities to beat boredom and melancholy. 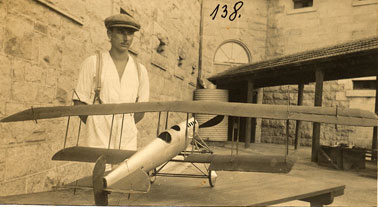 The model’s design and manufacture reflects the influence of German artistic and intellectual traditions, patriotism and the fascination with aircraft as a new tool of war which had introduced celebrity flying aces such as the German ‘Red Baron’. The model also provides a research tool for historians to explore the First World War from an Australian perspective, in the context of the history of migration and settlement.

It has substantial intangible significance through its association with internment. Internees’ and guards’ families are not the only ones with a strong attachment to Trial Bay Gaol. Many local residents, both collectors and amateur historians, have carried our extensive research, documenting the history of the site and the collection. Much information resides in the memories of the South West Rocks community. The place is a focal point for both Australians of German decent and visiting German nationals. The model’s restoration became a focus for the local community and holds pride of place in the Trial Bay Museum as an inherently German object from World War I.

The Eindecker model is reasonably well provenanced to the site and a local collector. Ian Bremmer, a retired aeronautical engineer from South West Rocks, donated it to the Trial Bay Museum in 1985. An apprentice during World War II with experience working on flying boats, Mr Bremmer was experienced in fabric-covered aircraft. Retiring in 1982, he moved to South West Rocks, acquiring the model (in parts in Simpson’s general store), around 1983. Repair and restoration was carried out over a two-year period, although an earlier failed restoration attempt meant he had to rebuild it correctly, basing his work on a book of models obtained from an aeronautical magazine in the USA.

The Trial Bay Collection is rare in that it relates specifically to the German internee occupation of the site and is associated with significant participants at Trial Bay and World War One German internment camp history. These people include the camp artists Max Hertz, who was also a distinguished orthopaedic surgeon, Kurt Viese, who went onto become head of Disney Animation and E. Frolich, a prominent collector of the work of the Trial Bay internee photographers who donated a considerable photographic collection to the Australian War Memorial.

The Eindecker model bears similarities with the model boats of the internees of Berrima internment camp. It shows a strong eye for accuracy and detail and symbolises the German internee’s patriotism and defiance. As part of a larger collection, the model represents a time when Australia still looked to Britain for foreign policy and held deep suspicions of non-British immigrants. The collection represents Australia’s wartime fear of subversion and racial antagonism to cultural minorities. This is evidenced in the concentration camp nature of the internment, the isolation of the place and the internees’ boredom that was translated into detailed and precise models and toy furniture.

The condition of the object is fair to good. It is significant that the object remains in such good condition, albeit substantially reconstructed over time, that it is intact and located at the place it is historically associated with.

The Eindecker model’s importance lies in its potential to interpret not only the place as a site of internment, but also the experience of German communities. The collection presents the opportunity to interpret the stories of people interned at Trial Bay, then deported after the War only to return as migrants and become successful members of the Australian community despite their experiences.