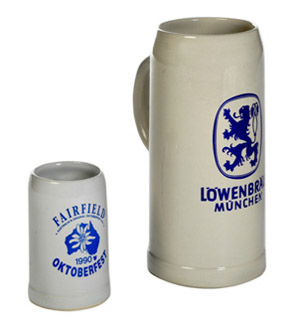 Object descriptions
Beer stein with handle, pale grey ceramic, 500ml, made by Ellscho/Australia for the German-Austrian Society of Australia and its Fairfield Oktoberfest, 1990. The emblem on the stein shows a map of Australia with a centred motif of an edelweiss flower and the date ‘1990′. The emblem is surrounded by the inscription, “Fairfield – Original Oktoberfest City”. The stein is in new condition.

The eisstock game piece has a solid wooden base, domed shaped with a turned wooden handle in the centre. The entire piece is made of oak and the base has a metal rim. 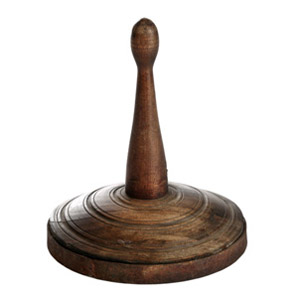 The 1990 Oktoberfest beer stein along with the traditional large three litre Lowenbrau beer steins have been used each year at Fairfield Oktoberfest celebrations from the first Oktoberfest in 1970 until 1990. Held on the Labour Day long weekend (the first weekend in October) at Fairfield Showground, Sydney’s original Oktoberfest attracts in the order of 30,000 people to the festival of German food and beer tasting, brass bands, yodelling and folk dancing, particularly Schuhplattler, a popular German slap dance.

The original Oktoberfest wheat beer brewed according to traditional German purity laws, which only allows water, barley, malt, hops and yeast to be used in the brewing process, is served on tap. The festival is opened when the President of the German-Austrian Club taps the first barrel of beer and cries out, “Ozapft is” (“it is tapped”).

The ceramic beer steins were in use until they were replaced by glass steins in the 1990s. With the growing number of patrons increasing each year, safety was a consideration and plastic steins have been used for the past ten years. The German-Austrian Society purchases 11,000 steins for the event and each beer stein is inscribed with the date and a new design emblem each year to record the occasion.

The 500ml Oktoberfest beer stein and wooden eisstock were donated to the Fairfield City Museum and Gallery by Walter Schmied, on behalf of the German-Austrian Society of Australia in 2003 The Oktoberfest beer stein dated 1990 was one of the last ceramic steins made for the Club before they introduced glass steins. Walter Schmied has been the President of the Society for the past 23 years, and is still a team eisstock player.

Walter Schmied was born in Neda, Austria in 1935, and went to school in St Polten, where he later worked as a cabinetmaker and joiner. The school was located in the Russian occupied zone where Walter was educated in Russian and English. His wife-to-be was torn between staying in Austria with Walter because of his good job, and being separated from her parents who were migrating to Australia. To alleviate the separation, Walter agreed to migrate to Australia for two years as an Assisted Migrant on the Toscana, arriving in Sydney on 16th June 1959. A return visit to Europe in 1969 helped Walter decide that his future lay in Australia.[1]

Walter’s skills allowed him to undertake employment in shop-fitting and furniture making and over 26 years he worked his way up to Production Manager at Chiswell Furniture. With the plane his uncle had given him in Austria, he put it to professional use, in the building of his house in Canley Vale, and in the making of numerous tables and chairs to furnish the German-Austrian Club at Cabramatta.

Walter’s most prized possession is the Golden Award Cross, which was presented to him on 21st April, 1994 by the President of Austria for the contributions he has made to the Austrian community in Australia.[2]

Following an agreement between the Australian Government and the Federal Republic of Germany in 1952, the numbers of Germans entering Australia would be determined annually by mutual consultation. By 1954 the Census figures listed the German population as 65,422, reaching 109,315 in 1961, with 84% being Assisted Migrants.[3]

German clubs that operated before the war could no longer accommodate the needs of increasing numbers arriving after 1950. The idea to form a Club in the western suburbs began in the mid 1950s when German and Austrian community members held social occasions and dances in various hired halls in Cabramatta, Liverpool and Blacktown. The Club was registered under the Companies Act in 1956 with over 600 members, but without a specific venue. Proceeds from numerous fund raising events, enabled two properties to be purchased at 73-75 Curtin Street on the eastern side of the railway line at Cabramatta in 1961, with the foundation stone being laid by the former Prime Minister of Australia and member for Cabramatta, Mr Gough Whitlam in 1965.

The entrance and interior to the main auditorium of the German-Austrian Club are decorated with scenes of various cities in Germany, Austria and Switzerland painted by a Club member, Rolf Sieber, with German and Austrian flora and flags embellishing each side of the stage in the auditorium and capturing the essence of both cultures.

In the planning of the first Oktoberfest in Fairfield, alternatives had to be considered as the Club’s premises were not suitable as a venue. The first Oktoberfest was held at the Fairfield Showground in 1970, setting the scene for many other cultural clubs and organizations to celebrate national occasions at the showground. Mr Schmied recalls:

It was an extremely hot day, and the numbers predicted to attend were underestimated. It was something new and Australians poured in and discovered our foods, drink and music. It was a huge success and continues to be so.[4]

In addition to organising the annual Oktoberfest, the Club originally offered an extensive programme of entertainment and sporting activities focusing on traditional German and Austrian card games such as Kniffel, Jäergruppe, Schnapsen, Skat, and recreational pursuits such as Eisstock schiessen (icestock shooters), air-rifle shooting and folk dancing. Folk dancing in traditional costume is no longer a regular event at the Club, but the broader community are privileged to experience the spectacle at the Oktoberfest each year. 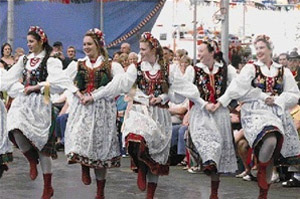 Patronage is dwindling with the age of members, the limited involvement of the second generation, many because they do not speak German, and the decrease in migrant numbers to perpetuate the cultural activities of the club. Some of the activities of the Club have discontinued as a result. With changes to Australia’s immigration policies, the German migrants from 1980s onward were of a different type to those arriving in the 1950s and 1960s. Those arriving after 1980 were well educated, had sufficient command of English and had left their home country for completely different reasons. “The old-fashioned atmosphere is said to hold little appeal for them”.[5]

In Germany and Austria, the game of eisstock (ice stick shooting) is a team game played on ice in winter and a smooth surface in summer. Each team member, with 6 as the minimum number, throws the piece by the handle at a small metal puck, with the challenge being to move the goal away from previous contestants who were closer to the target puck. 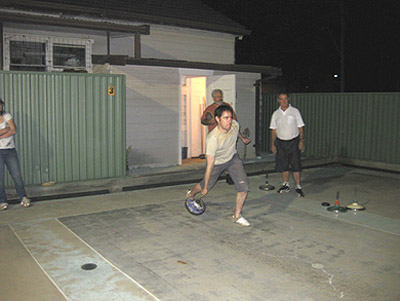 The Club’s Ice stock shooters originally played in teams on the polished wooden floor surfaces of the Club’s Auditorium with solid wooden ice sticks with weighted metal gliding plates on the base like the one donated to the Museum. As the name implies, the game piece was intended for use on ice surfaces either indoors or outdoors in the countries of origin of the game. In 2001 the Club and the Icestock Shooters built the outdoor arena adjacent to the Club, to international competition standards with voluntary labour. Members meet weekly and over the years have performed extremely well in Australian and International competitions.

On the concrete playing surface of the arena, the Club uses modern and highly technical metal ice stock game pieces. Each eisstock has various metal plates that are screwed onto the base to modify the direction or speed at which the hurling of the eisstock will finish in relation to the target puck at the other end of the arena.

The wooden turned eisstock is now a ‘museum piece’, although still used on ice in Europe. 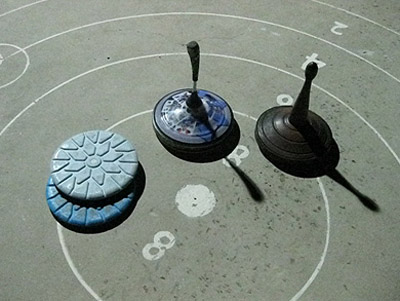 Metal eisstock and detachable plates and on the left, and a wooden eisstock on the right. Photograph by Jurgen Steiner. Courtesy Fairfield City Museum and Gallery

The Bier stein and eisstock game piece are social and culturally significant. The German-Austrian Society of Australia Club was formed to assist Post World War Two migrants to resettle into suburban Fairfield community life between 1945 and 1960, and fulfil an important social and cultural role in an alienating culture. After moving from the temporary accommodation at the Migrant Hostels at Cabramatta, Villawood and Scheyville, German and Austrian migrants were able to congregate and engage in familiar cultural and recreational pursuits after long days working, sometimes at more than one job.

The Club is now an integral part of community life in Fairfield and attracts many other nationalities to celebrate milestones in their lives in the large Auditorium. Through the annual Ocktoberfest organised by the Club, Fairfield residents and beyond, have become acquainted with the food, beer, wine, folk dancing and the spirit of German-Austrian culture. The popularity of the Oktoberfest helps to maintain the operation of the Club[6].

The beer stein and the eisstock have interpretive significance as reminders to future visitors to Fairfield City Museum & Gallery of the impact that German and Austrian cultures have had on Fairfield. The mentioning of “Oktoberfest” becomes synonymous with ‘Fairfield’, the largest Oktoberfest event in the southern hemisphere and the third-largest in the world[7].

[6] Personal conversation at the Clubhouse with Walter Schmied, 5/3/09