Friendship stick made of mulga wood mounted inside a plastic case and stored inside a royal blue cloth bag with a black drawstring. The friendship stick is rectangular in shape with rounded edges and has a smooth finish. There is black decoration which has been burnt onto the wood around one section of the stick in the form of lines and semi-circles. The friendship stick rests in a blue plastic case on two pieces of black foam and is strapped into place by a pair of elastic cords. On top of the case is a blue metallic plaque with the Olympics logo on it.

The Sydney 2000 Olympic Games, in the words of IOC President Juan Antonio Samaranch, were “the best games ever”. Held in Sydney from 15 September until 1 October 2000, the Games were a spectacular success. Performances at the Opening and Closing Ceremonies celebrated Australia’s history and culture. The games were declared open by the Governor General of Australia, Sir William Deane; the flame was lit by Indigenous Australian athlete Cathy Freeman; the Olympic Oath was spoken by triple gold medallist and ‘Hockeyroo’ Rechelle Hawkes; and the Officials’ oath was pronounced by water polo official Peter Kerr. In a symbol of the power of the Olympic Movement, South and North Korea marched together under one flag in the Opening Ceremony, and four athletes from the newly independent nation of East Timor took part under the Olympic flag. 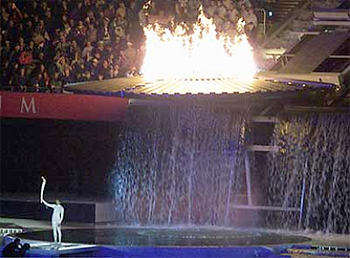 In all some 10,651 athletes from 199 nations competed in 28 sports and 300 events. The 2000 Australian team was the largest to ever represent Australia in Olympic competition; 629 athletes competed in Sydney, surpassing the 424 who competed at the Atlanta Games in 1996. The Olympic athletes of all nations was supported enthusiastically by packed audiences at every event, appreciating their sportsmanship and spirited competitiveness.

In 1999, Indigenous artist, Gavin Flick, collaborated with Sydney Organising Committee for the Olympic Games (SOCOG) to select a traditional object that could be crafted quickly and in large quantities as gifts for officials at the Sydney Olympic Games. This process led to the selection of the friendship stick and its refinement to a suitable size. Flick, along with his son, Jai Rose, crafted at least three examples each week while his wife, Alanna Rose, burned on the traditional artwork. Their work reflected their associations with the Kamilaroi Language Group in north-western New South Wales. Also contributing to the project was Flick’s brother who collected pieces of mulga wood during his trips to the bush. 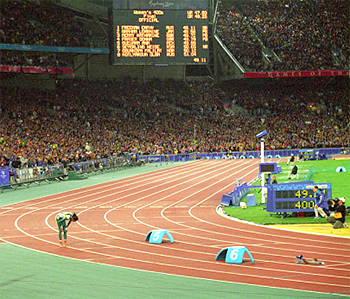 Sydney design group, Bang Design, manufactured the plastic cases in mid 2000 using an injection moulding process. The long, sleek cases exemplified modern Australian design, contrasting the traditional friendship sticks contained within. Referencing Australia’s beach culture, the blue translucent surfaces created the illusion that the friendship sticks were submerged under water while the black elastic fastenings alluded to surfboard leg-ropes. On the lid, a plastic attachment depicted the swirling, water-like pattern that came from the Fluid Energy motif – a once ubiquitous graphic design that symbolised the Olympic Rings reflected in Sydney Harbour. Bang Design completed this and several other Sydney 2000 projects in the months preceding the Games.

The SOCOG sold 92.7% of the 5.7 million tickets allocated, with a value of $780m. The efforts of the 47,000 volunteers who supported the Games were widely praised. During the games, Sydney hosted 362,000 domestic and 110,000 international visitors. The global television audience for the Games was estimated to be 4 billion people, watching over 36 billion viewer hours. Within Australia, more than 10 million watched the opening and closing ceremonies and almost 9 million saw Cathy Freeman run in the 400 metres final. Sydney hosted 17,000 media personnel from throughout the world. 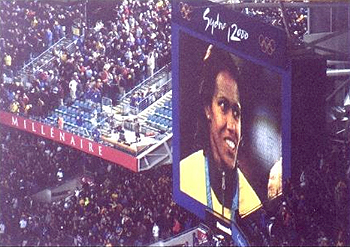 Melding Indigenous and contemporary Australian design, this mulga wood friendship stick and its moulded plastic case reflect an Australian culture that has been shaped by diverse histories and traditions. Made in 1999 and 2000, the two were combined to symbolise Australia – its Indigenous and non-Indigenous heritage – on the threshold of a new millennium. Approximately 140 identical sets were made and this particular example was kept by SOCOG for its collection.

The Olympics also provided a platform for indigenous and green groups to take their message to the world. The most notable being the Stolen Children Protest march and Midnight Oil’s ‘Sorry’ suits worn during the closing ceremony. 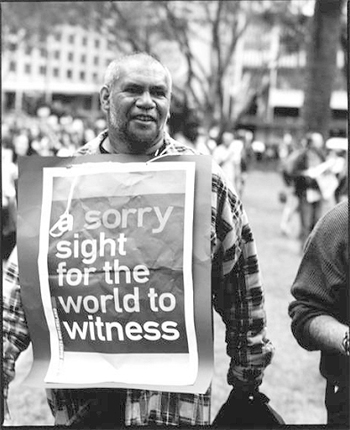 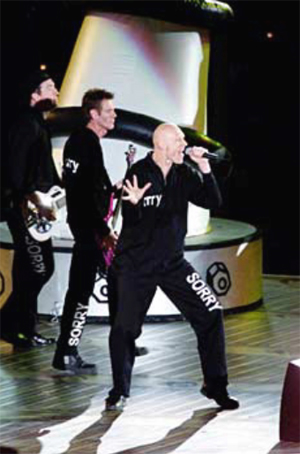 Midnight Oil do the Sydney Olympics 2000. Courtesy of wikipedia

The friendship stick and its case has aesthetic significance in the design and manufacture of aboriginal material culture and contemporary design.

The friendship stick is significant for researchers as it has the potential to resonate with all types of material culture produced from the Sydney Olympic to and provide a powerful research tool to understand and interpret the cultural and political landscape of Sydney in 2000 at the time of an enormous cultural event.

The friendship stick has significant tangible value to the Aboriginal people of New South Wales, the wider population of Sydney and Australia as a symbol of the overall harmonious nature of the Australian community despite continual waves of migration and the issues of dispossession and violence in the Colonial era and the stolen generations of the 20th century.

The friendship stick is well provenanced and documented. It was made for and owned by the Sydney Organising Committee for the Olympic Games, and donated to the Powerhouse Museum after the Games.

The friendship stick is rare as Gavin Flick and his son, Jai Rose, crafted a limited number of the mulga wood friendship sticks while his wife, Alanna Rose, applied the traditional, concentric designs, each one slightly different. Flick’s brother collected the pieces of mulga wood during his trips to the bush.

The friendship stick represents sub themes in Australia’s migration history of minority communities that are often over-shadowed by the main Australian cultural groups, mainly Anglo Australia. In celebrations and large cultural events Aboriginal people have traditionally been presented as either historical curiosities swept away by the arrival of Europeans after 1770 or as fauna. The advent of Survival Day at La Perouse in 1988 as a protest to the bicentennial of the European founding of Australia in 1788 has forced the recognition of the survival of the Aboriginal people and the role Aboriginal communities play in wider Australian society.

The friendship stick interprets the survival and celebration stories of the Aboriginal people and their role in the 2000 Sydney Olympics. The issue of dispossession, settlement, genocide and survival are issues that still inhabit the indigenous debate in Australian society and politics. These tensions are still evident in Australian culture today.