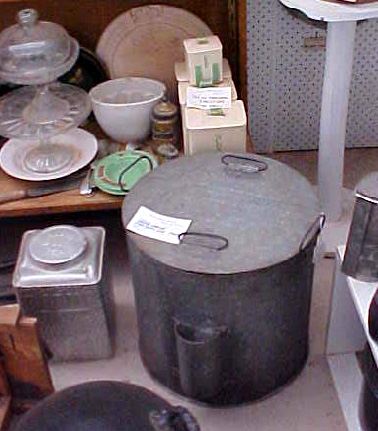 In the 19th and early 20th centuries, the role of women in German communities centred round ‘Küche, Kinder und Kirche’ or ‘cooking, children and church’. The kitchen was the centre of the domestic life, with its large open fireplace. Cast iron boilers and stockpots were hung from hooks placed over the wood fire. There was a supply of hot water from the iron kettle or fountain, which was either suspended from another hook or placed on a stand at one end of the fire. Bread and other meals were also cooked in a camp oven, which sat among the glowing logs of the fire.

Fruit and vegetables, grown on the farm, were also available, along with eggs, cheese and home made bread. Many women timed their planting to coincide with the phases of the moon. The plants that fruited above the ground had to be planted during the first half of the lunar cycle, while root crops and potatoes were planted in the latter half of the lunar cycle.

In times of plenty, surplus fruit and vegetables were cut and dried in the sun or salted and pickled. Cabbage (sauerkraut) and dilled cucumbers (sauergurken) were based on recipes bought from Germany and handed down through the generations. Pie melons were also grown and used for jam making and melon pie (pompenbrei).

The influx of German settlers to the Temora and Trungley Hall area reached its highest point in the first decade of the twentieth century. Among the new names and families who came into the area during this period was the Fritsch family. Edward Fritsch and his large family arrived in 1909, with two of his sons having come to the area in the previous year to harvest the family’s first crop. Wagons were brought overland from Winiam near Horsham in Victoria. The women and children came by train.

The preserving pan was manufactured by Mr. Edwin Fritsch on ‘Woolshed Farm’ in the Trungley Hall district. With restrictions on metal and other commodities during World War II it was necessary for many households to resort to the use of recycled metal for the manufacture and repair of farming and household equipment.

Women were encouraged to go ‘back to the simple, sure methods of grandmother’s days when every industrious housewife made her preserves, brewed her mild nectars, and put down her pickles’. 1

Fruit or vegetable, along with other ingredients are placed straight into this type of pan. The pan or boiler is then placed on the top of an electric, gas or slow combustion cooker. Cooked contents, such as jam, chutney or stewed fruit are then placed in sealed jars. The cooked fruit or vegetables is placed in jars and then placed inside the preserving pan. Water is then added to the pan to cover jars. The preserving pan is then placed on top of an electric, gas or slow combustion cooker and the water is then brought to boiling point. The jars and their contents are then kept at a constant temperature in the pan to facilitate sterilisation of contents.

The preserving pan has historical significance as evidence of the second phase of German farming and settlement in the Riverina and Australian domestic practice. It is a good example of a home manufactured preserving pan from the 1940s, a practice that was common on Australian farms. It is associated with the Fritsch family and the 2nd phase of German settlement in the Riverina and suggests this work continued after World War II.

Manufactured by Mr. Edwin Fritsch and used by Mrs. Clarice Fritsch, the preserving pan is a significant object in the interpretation of traditional skills passed down through German families in the Trungley Hall district.

The preserving pan forms an integral link between the traditional skills and values brought to the Temora and Trungley Hall area by the pioneering German families and their descendants.

It has interpretive potential to illustrate home preserving methods popular on farms and in Australian homes before the rise of the motor car, packaged foods and super markets.