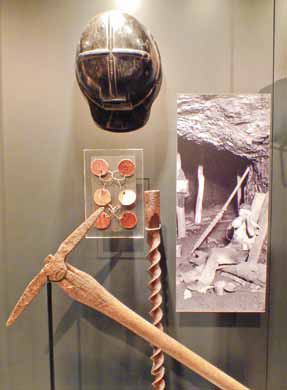 Object Description
In the coal mining industry tokens were used as identification labels on coal skips. Each miner had their own number on their tokens which they clipped to skips they filled with coal. When the skips reached the surface, the tokens were counted to tally the miners work.

These tokens belonged to Charlie Barker, a Welsh coalminer who emigrated to Boolaroo near Newcastle, New South Wales with his parents and five siblings in 1923. When he arrived in Australia, he immediately began work at Stockton Borehole though he was only 14 years old.

Arthur Butterworth was a miner at the Redhead Colliery. On 21 January 1926, Arthur was injured in an explosion and died in Wallsend Hospital eight days later, aged 55.

Charlie Baker was a miner and the son of a Welsh coalminer. With his mother and five brothers and sisters he migrated to New South Wales in 1923 settling in Boolaroo.

In 1940 Charlie was appointed as a trainee in the Mines Rescue Corps. In 1942 Charlie gained the Deputy’s Certificate in Mines Rescue. In 1944 Charlie became a permanent Mines Rescue Corps member. In 1969 Charlie was elected president of Hunter District Branch of the St. John Ambulance Association, after being vice-president for two years. Charlie retired as instructor at Newcastle District Mines Rescue Station after 29 years continuous service. During this time, he gained a specialised knowledge of modern mines rescue, fire fighting and gas detection appliances and procedures

Mining was one of the first industries that developed in the colony. From 1800 coal was mined in the Hunter Valley and later in the Illawarra where companies such as the Australian Agricultural Company used assigned government convicts to carry out operations. From the 1850s gold attracted thousands of migrants seeking to make their fortune who brought the Eureka Stockade collective ethos into Australian working culture.

Specific British communities were targeted for assisted immigration because of their agricultural and industrial skills and knowledge. The first miners in New South Wales brought skills and techniques developed in the mines of Wales and Britain.

Coal was first discovered in Australia in 1791 by a convict, William Bryant, at the mouth of the Hunter River in New South Wales and the first coal mining settlement was established there in 1801. 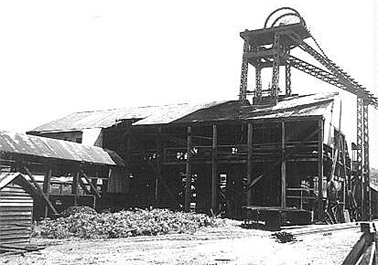 In the early years of the colony coal provided domestic heating and cooking. By the second half of the 19th century the railways and steamships had become the primary market for Australian coal. By 1888 annual coal production in New South Wales and Queensland had reached 2.5 million tonnes. 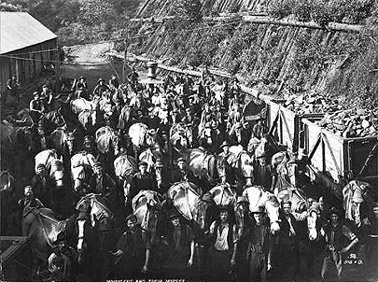 Pit Ponies and Miners in the Illawarra, c.1900, Courtesy National Library of Australia

By 1900 coal gas lit and heated our cities and towns. The demand for thermal coal increased during World War II with rising electricity demand. By the 1960s coking coal became our primary export to Japan for the rapidly growing Japanese steel industry.

The traditional Welsh process for mining coal was developed to extract coal from flat seams in the rock. The coal was cut from a seam by undercutting the rock at the base of the seam and crow-barred down. Later in 19th century holes were hand drilled in the rock above the cut, filled with explosives that exploded collapsing the seam. The coal was then hand-shovelled into skips. The tally of each miner was recorded by token at the pit head. In very early mines it was common for sorting and sizing of the coal to occur at the coal face with no treatment above ground as was the case in Queensland until after 1900. As production increased above ground screening, picking belts and washing became the norm. Each miner was expected to cut, load and transport about two tons of coal in a shift.

Coal seams were either accessed by way of a vertical shaft or by an inclined tunnel that facilitated the more ready removal of coal by rail systems. At the base of the shaft or inclined tunnel the seam was worked outwards in one of two ways.

Bord and Pillar mining was the traditional British method used in Australian collieries. This method consisted of mining in broad compartments (bords) up to 9 metres wide with pillars between the bords supporting the roof. Cross shafts linked the bords allowing the extraction of the coal at regular intervals leaving a grid of passageways around pillars that supported the roof. When the coal had been depleted the pillars were then removed allowing the roof to settle slowly. The area where mining had been completed and pillars removed was called the Welsh colloquial goaf or gob. 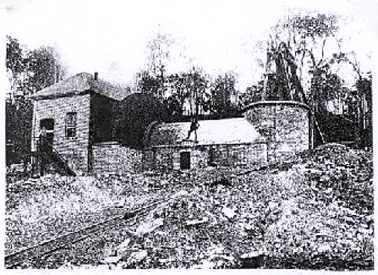 Working conditions for coal miners slowly improved as safe working regulations fought for by mining unions were introduced and mechanical mining became more common. However change was slow and features such as showers and change rooms only becoming common by the late 1940s. The volume contract system continued at most collieries until at least the end of World War II. Working clothing was supplied by the miner, cloth hats being the normal headgear– miners protective helmets did not become compulsory in New South Wales until 1941. The gradual mechanisation of mining had the most profound impact on mine working conditions; though its introduction was from time-to-time resisted by the mining unions as threatening to reduce the amount of work available for miners. Cutting machines relieved miners of the backbreaking and dangerous process of undercutting the seam, and mechanical loaders reduced the manual handling of the coal.

The Welsh have a long history in coal mining and were targeted for assisted immigration to develop the industry in Australia. The close knit communities and the nature of the workplace provided the environment of the effective organisation of mining industrial unions that are a feature of the industry worldwide. Welsh names abound the Newcastle, Maitland and Illawarra areas and lend to the distinctive Celtic nature of these communities. It was the industrial unions, the workers and their communities who were the most enthusiastic supporters of the white Australia policy.

Reeves, A 1988, Another Day, Another Dollar: Working Lives in Australian History, Murdoch, Melbourne.