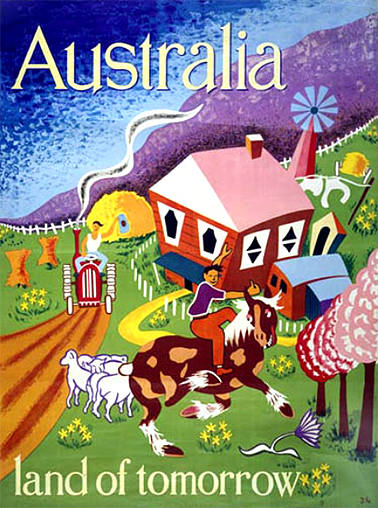 Object/Collection Description
Emigration poster made by Joe Greenberg in 1948. Paper, Dimensions are unavailable. 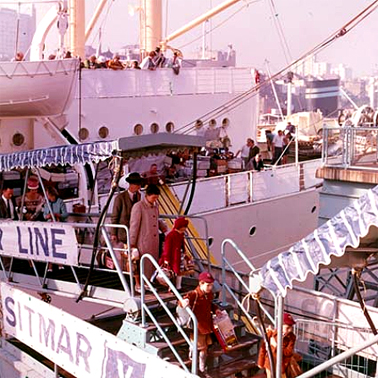 Migrants arrive in Sydney on the Fairsea, c.1963. Courtesy National Archives of Australia 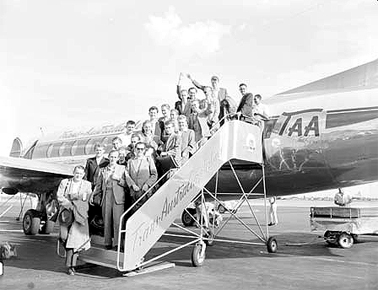 German migrants arrive onboard a T.A.A. Viscount flight, C.1956. These migrants flew from Hamburg, Germany, under the assisted passage scheme sponsored by the Inter-governmental Committee for European Migration. Courtesy National Archives of Australia

The creator of this poster, Joe Greenberg, was told later by a Czech migrant that it had been displayed in all the migrant camps in Europe, and had influenced him to come to Australia1.

The poster has historic significance as evidence of post World War 2 mass migration and the attempt by the Australian government to build the nation’s population with European migrants at a time when the White Australia Policy was firmly enforced.

The poster has intangible significance as a reminder of the experience of thousands of post war migrants and the apartheid years under the White Australia Policy.

The poster is well provenanced to Joe Greenberg and the Victoria Museum Collection.

The poster represents a time when Australia saw itself as a predominantly European culture and assisted nearly 200,000 people from Europe to migrate while maintaining the White Australia Policy and the Immigration Restriction Act to keep Asian and Pacific Islanders out.

The interpretive potential of the poster is considerable. The poster displays Australian Government promoting Australia as the land of prosperity and growth to prospective European migrants with the banners such as “Australia: Land of Tomorrows” and imagery of opportunity. The poster interprets the attempts by the Australian government to build up Australia’s population of European migrants at a time when the White Australia Policy was firmly enforced.

Museum Victoria aims to takes visitors on a journey of discovery to a new world of knowledge and perspective.
www.museum.vic.gov.au