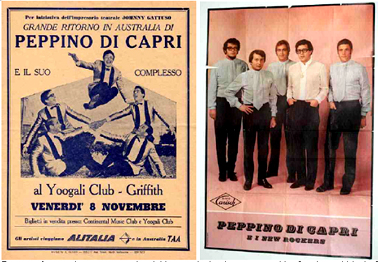 There was no shortage of Italian entertainment in Griffith during the 1950s and 1960s. The Continental Music Club and Yoogali Club frequently booked Italian acts to perform in Griffith as part of their Australian tours. The Continental Music Club arranged entertainment events by visiting musical artists. These were held at various venues and were booked by Gino Ceccato.

From 1937 there were several attempts to foster greater integration. In that year the NSW Department of Education sought to establish an English night school for Italians. According to its figures, less than ten percent of Italians in Mirrool spoke English and even fewer could read the language. The program failed, however, due to a lack of interest. The Area News also started a regular feature written in the Italian language, Sommario Di Cronaca in Italiano, in March 1938. It only lasted some six months due to an apparent lack of interest by local Italians in reading newspapers.

By contrast, the hour-long program broadcast by local Griffith radio station 2RG in Italian on Sundays at 5pm introduced at the same time – an Australian first – was extremely popular. Known as the ‘Italian hour’, the announcer of ‘la voce del Murrumbidgee’ was Corrado de Mayda. The program played a variety of music, including opera, ‘Neapolitan love songs’ and well-known contemporary Italian singers such as Tito Schipa, along with advertisements and community announcements. Australians were encouraged to buy an Italian grammar book and tune in to learn the language. It ceased with the outbreak of the Second World War and was not revived until the early 1950s in the form of the Continental Music Club.

In 1952 the Federal Bureau of Agricultural Economics was commissioned by the Irrigation Research and Extension Committee (IREC) to undertake a comprehensive assessment of the effectiveness of the MIA extension program. A joint Federal/State body set up under the authority of the CSIRO and State Department of Agriculture, IREC’s role was to identify and guide research and extension work on the irrigation areas and act as an advisory committee to government agencies serving agriculture. Among the findings was that very few Italians participated in the extension program due to language difficulties, the exclusionary structure of Italian-Australian contact and a general suspicion of extension officers who also performed a regulatory role.

The problem which emerged [from the survey] was that half of the farming population – that is, the Italian speaking half – were not part of the extension groups; were not part of the co-operative management; were not part of any organ of the local town; and of course because of language problems were not exposed to the flow of information in the written English form, either in the pamphlets or in the local English newspapers or in any of the material that had been produced by the service. Al Grassby, Executive Officer IRE.

Grassby came up with the idea of a radio music club to be broadcast on the regional radio station 2RG in the Italian and Spanish language as the medium for promoting integration through inclusive cultural and community activities. A similar program, the ‘Italian hour’, broadcast on 2RG years earlier in 1938 had been extremely popular. Grassby proceeded to recruit a group of six local Italian men, three of whom were Veneti. All of them had either been born in the Griffith area or settled in the interwar years. The ‘Continental Music Club’ was chosen as the name because of the residual antagonism towards Italians as a result of the Second World War. The program’s format was similarly intended to obfuscate its true nature.

We had to think of something that would not raise the ire of the Anglo Saxons who were a very important and key part of the community, particularly in those early post-war days when the RSL had power and authority. So if you mentioned ‘Italy’ they got upset. If you mentioned ‘Continental Music’ they weren’t so upset. If you mentioned music, of course nobody was upset. So what we did was we formed a Continental Music Club which was a euphemism for an organisation which was designed to carry out cultural activities. Al Grassby, Executive Officer IRE. 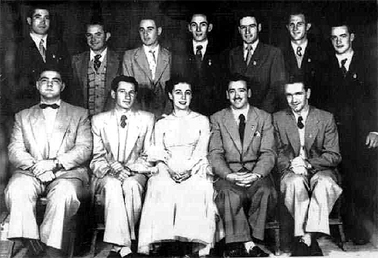 The program first went to air in 1951. It was broadcast at 9pm on Friday nights for one hour as well as half an hour on Sundays. Although it provided important farming advice and general community information, it also promoted Italian and Spanish culture through music, from opera to Italian pop. The programs were financed by subscriptions of one pound per year which entitled members to request their favourite song on the Friday night program. The club bought its records from the local record shop, Walton’s Electrical and Radio Shop, who obtained them from a Melbourne-based Italian importer, Nino Borsari.

A number of social and cultural activities were also organised, including dances, the screening of contemporary Italian movies and concerts starring touring Italian artists, often in conjunction with the Yoogali Club. As Gino Ceccato recalls, the club arranged everything, from finding the venue, advertising in the local paper and distributing promotional leaflets in shops, to making sure that ‘there was a piano in tune’ in addition to undertaking ‘all the work on the night of the show’. 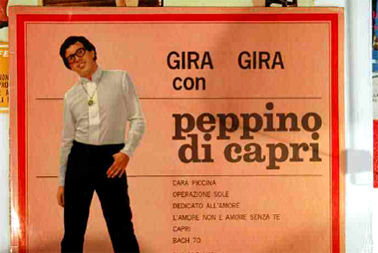 One of approximately 700 vinyl records in the music archive. Photo Peter Kabaila

There was no shortage of Italian entertainment in Griffith during the 1950s and 1960s. The Continental Music Club and Yoogali Club frequently booked Italian acts to perform in Griffith as part of their Australian tours. Gino Ceccato, who was responsible for booking them, can remember the performers arriving in Griffith in large black American-style cars.

Gino Ceccato recalled that a measure of success of the Continental Music Club in cultural integration was that one ‘Australian’ member suggested that the first popular Waterwheel street festival (in 1956) be opened by Gina Lollobrigida, while the preferred choice of Gino Ceccato, the president of the Club, was Marilyn Monroe.

Consistent with the club’s aims of fostering integration, many of its social functions were ‘deliberately geared to introduce the two halves of the Griffith community’ – that is, the conservative Country Party element and the Italian and other migrant groups. These evenings were attended by all sections of the Griffith community. On the invitation list were people such as Walter Bishop, the president of the RSL and an original soldier settler, and George Denham, the chieftain of the Caledonian Society, along with other leading members in the local community known to have been hostile to Italians in the past. As Grassby recalls, care was taken to ensure that they were ‘looked after’ at these functions, with someone to translate always at hand.

But the primary purpose of these social gatherings was to make the non-Italians aware that they made up only ‘half the community’. The strategy was a huge success in forging recognition that ‘there was this need to knit together’. As Grassby recalls, some of the events were confronting for non-Italians in other ways:

The club introduced the first Italian films. They were the new wave films of Rossellini and De Sica showing social realism of post World War Two Italy with poverty, destruction and prostitution. The Anglo Australians were horrified to presented with prostitution, drugs or anything improper. There was a cultural gap there. 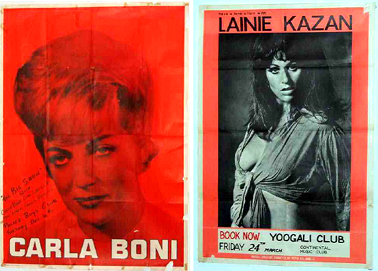 Despite its somewhat eclectic nature, the Continental Music Club was a formula which worked particularly well. Similar programs were established in other regional areas of the state with high Italian populations, with clubs formed in Leeton, Broken Hill and Lismore, creating a state wide ‘cultural network’. It also became the model for the launching of multilingual radio in Sydney and Melbourne in 1975, a legacy of Al Grassby’s period as the Federal minister for Immigration between 1972 and 1974.

The Continental Music Club Collection has high historic significance for its links to the social movement and government policy of “multi-culturalism” in Australia. Over the course of the twentieth century, Australian government policy to reduce cultural stereotyping shifted through three paradigms: (cultural) Assimilation, Integration and Multiculturalism. Items from The Continental Music Club document the earliest effort at Integration in Griffith.

The posters, record covers and printed tickets are aesthetically significant. They are interesting period pieces, reflecting fashions in graphic design, colour, and public entertainment. They provide evidence of the aesthetic values of the Italian community in Australia during the period of operation of the Continental Music Club.

The Continental Music Club Collection is representative of a good cross-section of music and performers favoured by Griffith Italians of the 1940s to 1960s. 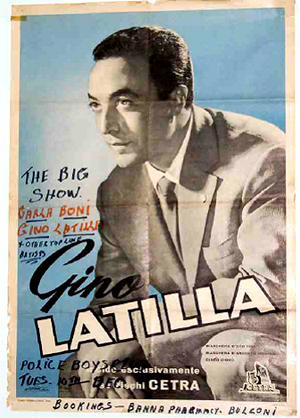 Continental Music Club Collection has interpretive significance due to its associations and reverberations with many topics. It has potential for multi-faceted interpretation of music, politics, the entertainment industry and multiculturalism.