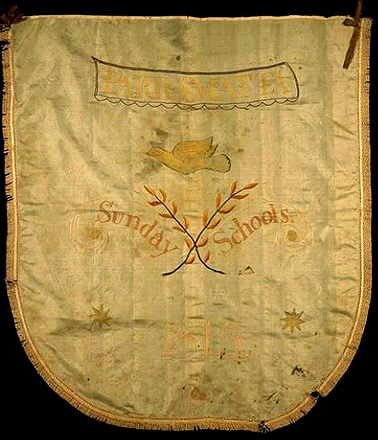 Object/Collection Description
A banner made in 1815 from silk and cross stitch embroidery that features motifs of a dove and the title ‘Parramatta Sunday school’. Dimensions: 720mm long x 648 mm wide.

In April 1809 Macquarie was appointed Governor of New South Wales, designated to take over from William Bligh due to the mutiny of the settlers and took up his commission as Governor on the 1st January 1810. His term in office coincided with an increase in the number of convicts sent to the colony. The colony was run down when Macquarie arrived with roads and building neglected and factional fighting among the community. His solution was to commence an ambitious programme of public works including new buildings, towns, and roads to help absorb these numbers. He encouraged well-behaved convicts into the wider community through tickets-of-leave. Macquarie’s achievements include: the buildings of Francis Greenway, the paintings of Joseph Lycett and Richard Read, the exploration of the Western Plains, the founding of Australia’s first bank, Sunday schools and benevolent societies. 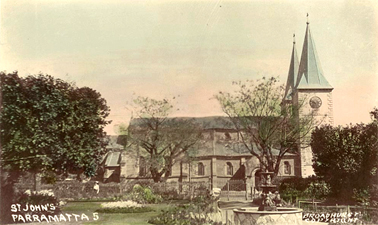 The Sunday school at Parramatta was one of the first set up under Macquarie as a civilising tool to tame a wild and unruly penal colony that had grown out of Port Jackson, New South Wales under the corruption of the New South Wales Corp otherwise known as the Rum Corp. Prior to the arrival of Macquarie life in the New South Wales colony was a constant wild orgy of grog, sex and crime. Macquarie sought to tame this licentiousness and the Church and education were the best tools. Macquarie was also mindful to counter the incursion of Catholicism in the colony, especially with the increasing number of Irish convicts. Macquarie was an evangelical Protestant and sought to influence the up coming generation of locally born children in the ideology of piety and prudence. Under the influence of Macquarie, with the support of Colonial Office, the evangelicals dominated New South Wales. The Governor, the principal chaplain Samuel Marsden, known as the “Flogging Parson”, the judge advocates Ellis Bent and John Wylde and other civil and military officers were all devout evangelicals. Under their influence the tone of the Colony became firmly Protestant and evangelical. 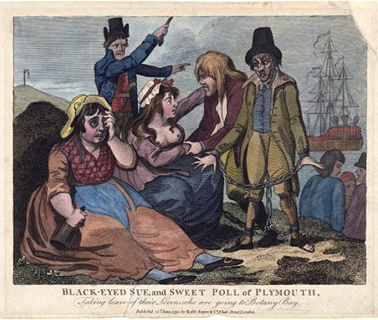 The first church opened at Parramatta in 1803. It became the church of Samuel Marsden. It was the only church in the colony until 1809. In 1810 Macquarie began remodelling it, and the towers were completed in 1819. The original building was demolished in 1851, replaced by the current structure designed by James Houison. The transepts were added in 1882 by Edmund Blackett.

The site on which the church stands has been used continuously for a house of worship since 1803, although the main part of the present structure dates only from the 1850s. The foundation stone of the first church on this site was laid in 1799 during Governor King’s term of office. 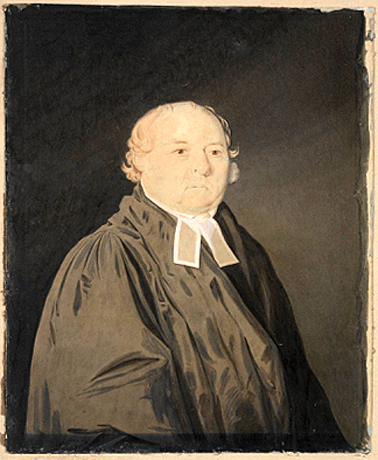 During Governor Macquarie’s time, repairs and alterations were made, the twin steeples were completed in 1819. The building fell into disrepair and it was found necessary to completely rebuild the church. Only the steeples and tower remain today as part of the earlier church. The foundation stone was laid by Bishop Broughton. The first divine service in the new church was held on the 1st of July, 1855. The north and south transepts were added in 1883.

Macquarie’s intention was to civilise the Colony out of its brutal penal past. Macquarie encouraged a mixed society of convicts and free settlers and ticket of leavers (convicts who had served most of their sentences and were allowed to work for themselves under strict rules) to take up farming. Macquarie promoted the role of the church and especially Sunday school Movement in creating a prosperous, chaste and pious society- a yeomanry who lived in harmony nature under a fearsome god. 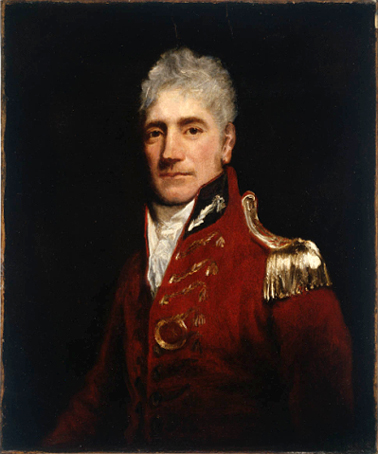 The banner has historical significance as a rare fabric banner from the convict era. The banner is evidence of Macquarie’s intent to tame the wild penal colony expanding with an ever increasing population of male and female convicts. It is evidence of the sort of upright and pious yeomanry class that Macquarie saw for the future of New South Wales.

The Sunday school banner has aesthetic significance in the design and manufacture of cross stitched fabrics and banners from the early colonial era.

The Sunday school banner is significant for researchers as it is one of the few existing cross stitched fabric objects from that time. Its design and manufacture make it a good example of a hand made banner and cross stitch work from early colonial Australia.

The banner has intangible significance being an iconic object and a symbol of Australia’s brutal convict origins, early settlement and migration.

The banner is well provenanced and documented. It has been in the National Library of Australia collection for many years, actual date of acquisition unknown.

The Sunday school banner is extremely rare. It is one of a few existing early colonial banners and cross stitch work in public collections in Australia. It is also rare as a fabric object from early colonial Australia and Britain.

The banner represents a time early in Australia’s history when the colony was still establishing itself and exploring its new environment. The banner represents the shift in Britain’s policy for the penal colony and its gradual expansion from Sydney Cove as a free society.

The banner is in excellent condition for its age and fabric.

The Sunday school banner interprets the dependence of convict labour in the establishment, survival and expansion of the early colony at New South Wales and the unsavoury nature of convictism. It interprets Macquarie’s efforts in taming the penal colony and making it more salubrious and attractive to free immigrants.