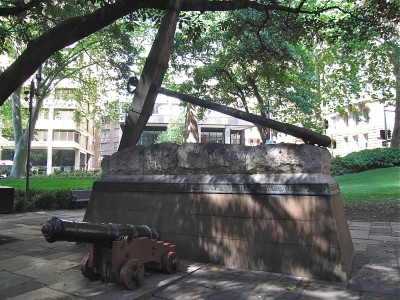 Anchor and cannon from HMS Sirius in 2011. Photograph Stephen Thompson

Object/Collection Description
A cast iron bow anchor and cannon from HMS Sirius, 1780 – 1790 which escorted the first fleet. Cannon was landed shortly after foundation of the colony in 1788. Anchor received from Norfolk Island after Sirius wrecked in 1790, erected 1907. Anchor is embedded on a rock faced quartzite capping sitting on massive sandstone pedestal. An engraved bronze band interprets its history. The cannon is mounted on timber carriage with wheels. The anchor is in good condition with conservation work undertaken in 1992. Dimensions: 2500mm long x 500mm wide x 100mm deep.

The First Fleet of 11 ships led by HMS Sirius, left Portsmouth in 1787 with more than 1480 men, women and children on board. Although most were British, there were also Jewish, African, American and French convicts. After a voyage of three months the First Fleet arrived at Botany Bay on 24 January 1788. Here the Aboriginal people, who had lived in relative isolation for 40,000 years, met the British in an uneasy stand off at what is now known as Frenchman’s Beach at La Perouse. On 26 January two French frigates of the Lapérouse expedition sailed into Botany Bay as the British were relocating to Sydney Cove in Port Jackson. The isolation of the Aboriginal people in Australia had finished. European Australia was established in a simple ceremony at Sydney Cove on 26 January 1788.

HMS Sirius was Built in 1780-81 for the East India trade and given the name Berwick, this 510 ton (some records suggest she was a heavier 540 tons) ship was purchased by the Admiralty in 1781 for use as a store ship, but was later laid up. It was not until 1786 that she was renamed HMS Sirius and recommissioned under Captain Arthur Phillip. John Hunter was appointed second captain to ensure that when Phillip was ashore, she would still be commanded by a post-captain. HMS Sirius was 30 metres in length, her breadth 10 metres, her depth 4 metres and the height of her mainmast above the deck, 32 metres. With 10 guns mounted on board (a further 10 guns with iron work for carriages were stowed in the hold for when she sailed with the First Fleet) and carrying 160 men, in a favourable wind, her best speed was 10 knots. 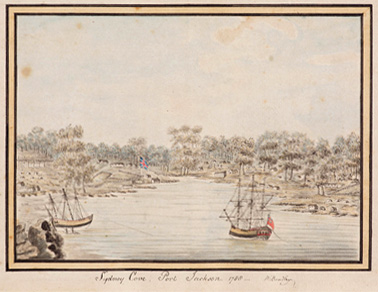 The HMS Sirius sailed from Spithead with the First Fleet on 13 May 1787, arriving at Botany Bay in NSW on 20 January, 1788 and Port Jackson six days later. She remained there until 2 October when she sailed for provisions to Cape Town by way of Cape Horn, thus pioneering this route. Leaving Table Bay on 26 January 1789 she continued eastward to Port Jackson where she arrived on 8 May, having sailed completely round the world in the belt of westerly winds known as the “roaring forties.”

HMS Sirius remained in the new settlement for 10 months leaving on 7 March 1790 to convey marines, convicts and stores to Norfolk Island. Arriving on 13 March she landed her passengers, but was compelled by heavy weather to remain at sea for four days before returning on 18 March to discharge her stores. She hove to off Sydney Bay and began to load her boats, but drifted too far into the bay and was unable to beat out again. Unfortunately from there she was driven onto the shore reef lying off the settlement and became a total wreck. However, by means of a hawser to the shore, Hunter and all the crew landed safely through heavy surf, and most of the provisions were saved. It was 11 months before a vessel was available to return Hunter and his crew to Sydney, where they arrived on 26 February 1791. They reached England in April the following year, and a court martial acquitted Hunter and his officers of any blame for the loss of the ship. 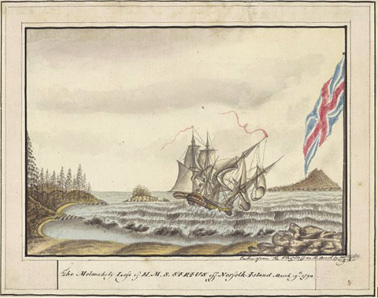 For 100 years the HMS Sirius wreck was shown on the Admiralty plan of Norfolk Island near which could be seen an anchor, which was probably that of the HMS Sirius. Sir Francis Suttor raised the anchor and in 1907 it was unveiled on a pedestal in Macquarie Place, Sydney. Great Sirius Cove (now usually called Mosman Bay), Little Sirius Cove and Little Sirius Point, all in Port Jackson, commemorate the vessel’s name. The cannon was landed shortly after foundation of the colony in 1788.

A salvage program began in 1983 after two archaeologists surveyed the wreck site. A second group recovered a carronade, an anchor and other material in 1985. In February 1987 a team of 11, led by the Curator of the Western Australian Maritime Museum, recovered more than 600 artefacts from the wreck site, ownership of which is contested by the inhabitants of Norfolk Island. Today these artefacts are displayed in the Maritime Museum at Kingston, Norfolk Island.

The anchor was conserved by Sydney City Council in 1992 and remains on display at the place in Macquarie Place, Sydney where the British flag was hoisted in 1788. 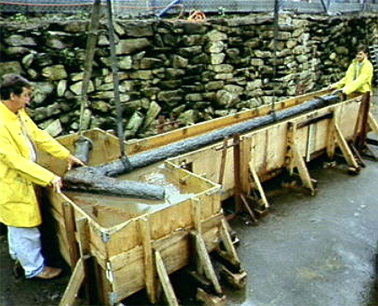 The anchor and cannon have historical significance as evidence of the arrival of the first fleet and establishment of a penal colony at Port Jackson in 1788.

The anchor is well provenanced and documented. It was recovered from the reef at Norfolk Island in 1909, transported to Sydney and has been displayed at Macquarie Place ever since. The cannon was landed shortly after foundation of the colony in 1788

The anchor and cannon are extremely rare as it is one of approximately 12 anchors carried by the HMS Sirius.

The anchor and cannon have intangible significance for Australians for the association with the landing of the First Fleet at Sydney Cove 1788, the tenuous beginning, survival and expansion of the early colony at New South Wales.

The anchor and cannon represents a time early in Australia’s history when the foundations of modern Australia were being laid at the expense of the Aboriginal nation, the beginning of the migration of people, concepts and ideas that would shape the social and political fabric of the Nation.

The anchor and cannon interprets the landing of the British First Fleet at Sydney Cove in 1788 and the beginning of Modern Australia.