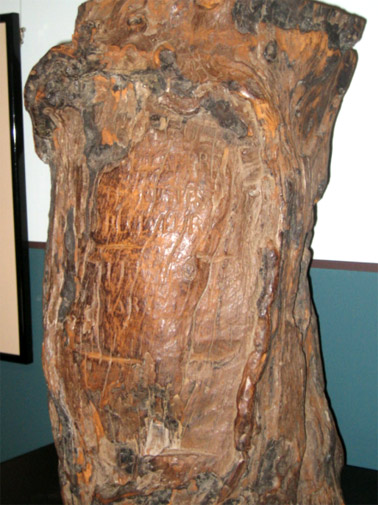 Object Description
A eucalyptus stump from Frenchmans Cove at La Perouse, New South Wales. The stump was engraved by the crew of the Coquille in 1824 to mark the grave of Peré Reçeveur. Peré Reçeveur was chaplain and naturalist to France’s great voyage of discovery in the Pacific of 1785 -1788, led by Jean François de Lapérouse. It is inscribed ‘Prés cet arbre reposent les Restes du P. le Reçeveur visite en Mars 1824′. The stump shows signs of fire damage thought to have been caused by the local Aboriginal people. The stump has some resin/ clay filling conservation work that was carried out by the Musée de la Marine. Dimensions: 610mm high x 310mm diameter.

The French stayed at Botany Bay for six weeks and built a stockade, observatory and a garden for fresh produce on the La Perouse peninsula. There had been a skirmish with natives in Samoa in which 12 of the crew were killed, including Langle, commander of L’Astrolabe. Father Reçeveur, expedition naturalist and chaplain, was injured in the skirmish and died at Botany Bay. He was buried at Frenchmans Cove below the headland that is now La Perouse. The place was marked by a tin plate which the Aborigines promptly removed. The British replaced it with another and tended the site. 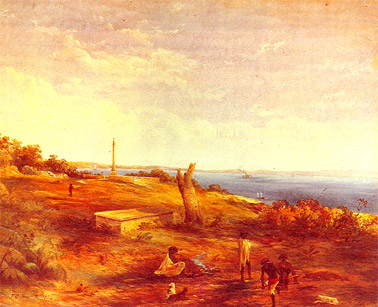 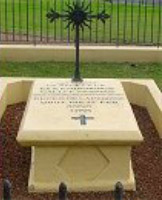 The last official sighting of the French expedition was in March 1788 when British lookouts stationed at the South Head of Port Jackson saw the expedition sail from Botany Bay. The fate of the expedition wrecked on the reefs of Vanikoro in the Solomon Islands during a cyclone was to remain a mystery for nearly 40 years.

Reçeveur has become mythologised as the second European to be buried in Australia, the first being Sutherland from Cook’s 1770 expedition who is buried at Kurnell.

In 1822—25 France mounted an expedition to circumnavigate the globe. The expedition was led by Louis-Isidore Duperrey in the Coquille. The Coquille visited La Perouse in 1824 and members of the crew engraved an epitaph for Father Reçeveur into a eucalypt tree growing at the grave site.

In 1825 the French frigate Thetis and corvette Esperance under the command of Bougainville, stayed at Botany Bay during their circumnavigation of the globe. Bougainville left funds for the establishment of a monument to Lapérouse and the marking of Reçeveur’s grave with a more substantial memorial. Bougainville commissioned a New South Wales Corps Officer, Captain Piper, to build a proper monument to Lapérouse and a tomb for Reçeveur at La Perouse. These were completed in 1826.

In 1854 it was decided to hold an Exhibition of Arts and Industry in Sydney as a preliminary to the Paris Universal Exhibition of 1855. Modelled on the Great Exhibition of Industry of All Nations held in London in 1851, the Paris exhibition had been initiated by Louis Napoleon and the colonial version too would imitate this extraordinary collection of objects. For the preliminary exhibition in Sydney, the organisers had selected the Hall of the Australian Museum. The Hall was decorated with scrolls of Australian native leaves, fruits and flowers. The floor of the Hall was covered with green baize and a dais was erected around the room displaying various objects. An assortment of stuffed native birds and animals from the Australian Museum collection, and two casts of classic statues, the Apollo Belvedere and the Venus de Medici, given to the Museum by Charles Nicholson, were placed in the Hall as evidence of colonial refinement.

Shortly before the opening of the exhibition, the organisers had ordered that the tree stump with Reçeveur’s epitaph be cut down, displayed at the exhibition and then sent to France. There it would be exhibited at the Paris Universal Exhibition. The inscribed tree stump was seen by the organisers, the public and the press at the time as a symbol of the colonial ties with France. The Illustrated Sydney News proclaimed that the French would be pleased that such an object was preserved with almost sacred respect through so many years out of respect for the intelligence and enterprise of a member of their own nation.

Before its removal, a water colour depicting the stump in situ beside the tomb of Reçeveur, with the Lapérouse Monument in the distance, was commissioned from the Sydney artist Frederick Terry. The watercolour was displayed above the stump at the Sydney exhibition. After the Paris exhibition the stump was donated to the La Perouse Museum, then in the Louvre, Paris. The water colour was later taken by Sir William Macarthur where it too was presented to the Louvre, Paris.

The stump has historical significance as an artefact from the early colonial period, European exploration, 19th century Museological practices and French – Australian diplomacy. The stump is significant as evidence of the place where the First Fleet landed and the subsequent meeting of the British and the French expedition led by Lapérouse. The stump is an artefact of the mythology surrounding the grave of Father Reçeveur. Stump also has historical significance as a 1988 bicentennial gift to Australia and a repatriated object returned to the place of origin.

The stump is significant for researchers as it is one of the few existing European artefacts surviving from early colonial Botany Bay, French exploration and as evidence of the culture of 19th century Australia.

The stump is well provenanced to Botany Bay, the Louvre and the Musée de la Marine, Paris France.

The stump is extremely rare. It is one of a kind, unique.

The object represents a time when the colony at Port Jackson was starting to prosper and the significance of Botany Bay was being established as a symbol of colonial Australian society’s morality and nobility, rising above its convict beginnings and taming the land. The stump also obliquely represents the triumph of European claim to Aboriginal land.

The stump is in excellent condition for its age and material.

The stump interprets the story of the Pacific exploration, the Lapérouse expedition and their meeting with the First Fleet at Botany Bay in 1788, the grave of the 2nd European buried in Australia and the development of 19th century Australian colonial values and consciousness to the world. The stump interprets the reverence the La Perouse site has had for France since 1788.