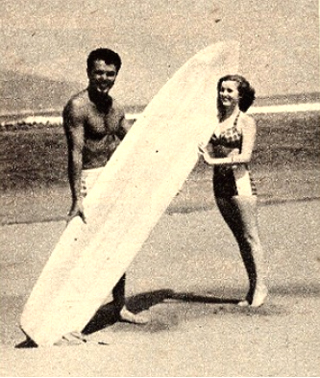 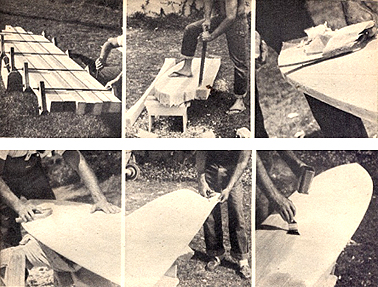 Cross section of a balsa Malibu, image courtesy of surfresearch.com

Modern surfing arrived late in Australia. While Hawaiian surfers had visited Australia on many occasions displaying their techniques on balsawood surfboards, the modern style of surfing in Australia came from California. In 1956 a group of Californian life guards toured the east coast of Australia as a part of the Melbourne Olympic Games program. They brought with them the new light weight ‘Malibu’ surfboards. The Californians toured with the Malibu boards from Avalon in NSW to Torquay in Victoria and in doing so defined the future of Australian surfing.

This event crystallised surfer’s interest and attitudes in Australia. An entire segment of surfing design history had been completely missed by the Australian surfing community.

The Malibu boards that arrived in 1956 were highly advanced craft compared to the Australian racing boards, which had begun as a paddling board for Surf Life Saving Club events in 1934. Bob McTavish recalled “I cannot convey to you what a sensation these little pods seemed to us… shock, delight, scepticism.” 1

The Malibu board had already made brief appearances as early as 1954, when Australian Hollywood actor Peter Lawford brought back a Rochlen Malibu board on a return trip from the US. Lawford and John ‘Nipper’ Williams surfed their Malibus at Manly in 1955.

Later in 1956, local Scott Dillon was lent an balsa/fibreglass semi-gun with concave deck to surf at a Bondi Beach event organised by ‘Flippy Hoffman’. Also at this event, an mass performance by the riders was as impressive as the long, sleek and tailored boards. A crowd of 50,000 people and extensive press coverage ensured the new Malibu boards were an instant sensation.

In a gesture of goodwill, the US & Hawaiian teams competed at more events at Avalon, Collaroy, Bondi, Maroubra and Manly over the 1956 summer. Their wave riding performances created excitement in the beach crowds. The impact was broadened when newsreel footage of the team surfing Collaroy was shown at cinemas2. This was followed by a colour film titled Service in the Sun (1957) that was commissioned by the sponsors Qantas and Ampol Australia. This film included three and half minutes of the American team surfing at Bondi. After cinema release, the footage was shown independently in virtually every Surf Life Saving Club on the Australian coast. 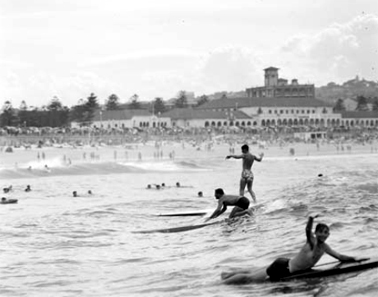 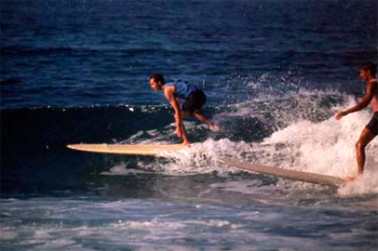 Subsequently, the demand for these new design styles quickly made all previous paddle boards obsolete. The boards used in these events remained in Australia, and were bought by upcoming Australian surfing identities such as Bob Evans (photographer and future editor of Surfing World magazine), Bob Pike (the first Australian International contest winner – in Peru 1962) and internationally renowned surfboard shaper Gordon Woods. 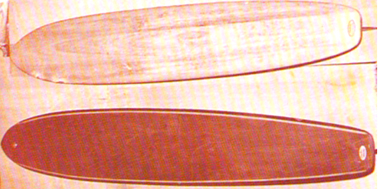 The Malibu board Gordon Woods bought from the Americans (right) and his plywood copy (left). Courtesy of Palm Beach Press.

The sudden onslaught of these boards and their potential, as well as curiosity for the largely unknown history that had led to their designs, encouraged experimentation in design among Australian designers which would rapidly progress over the next ten years.

This design period would once again involve Australia’s pioneer and premier surfers in progressive designs and modifications like the Aussie Pig Board, Nose Rider Mals, ‘hook’ tails, pin tail, the ‘eggs’ and others. The USA designs continued to grow and astound surfers all over the world. 3

Surfboards were not the only significant import, movies radio and television brought music and fashion. In the late 1950s and early 1960s Australian teenagers embraced American pop culture that started to infiltrate teen culture. The Hollywood manufactured hairstyles, clothing and benign anti authoritarian behaviour of Tab Hunter, Barbara Eden, Shelley Fabares and Fabian in the 1964 movie Ride the Wild Surf was instantly transplanted to the streets and beaches of Australia. This was a continuation of the ‘American invasion’ that began in World War II. 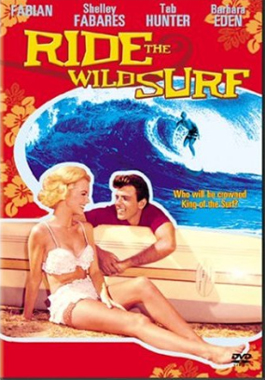 Australia adopted American pop culture, but produced its own earthy and grittier off shoots in the form of stars such as Johnny O’Keefe of whom it was said, “You could hear the streets of Sydney in that voice” 4

Out of this music came the stomp. The stomp belonged to beach culture. Bands such as the Atlantics, the Delltones, The Denvermen, the Telstars and Little Pattie and the Statesmen played to packed town halls and surf clubs up and around the coast of Australia.

In the mid 1960s the American Invasion would be countered by the British Invasion with the music and hysteria of the Beatles and the Rolling Stones. Records came to Australia with British migrants. Legendary Australian band The Easybeats were from British and Dutch migrant teens who met at the Villawood Migrant Centre, New South Wales.

The most characteristic Australian aspect of teen subculture was the beach. All of Australia’s major cities are in easy reach of the sea and the surf. Until the early 1960s the main activity was body surfing. The more disciplined young men obtained admiration as well drilled members of the Surf Lifesaving Associations. With increasing post war affluence and motor car ownership the young no longer had to confine themselves to popular patrolled beaches accessible by public transport. This combined with the increasing popularity of Malibu surfboards brought about a transformation of the beach teenage subculture in the 1960s. Groups of surfers could wander up and down the coast, in isolation, away from authority and surfing uncrowded breaks in a pristine environment.

The surfboard is historically and aesthetically significant because of it links to the explosion of new surfboard designs, the development of teen surfer subculture in the 1960s

The surfboard provides a research tool for historians to explore the post World War 2 influence and expansion of American pop culture in Australia and the development of American inspired surfboard design and production in Australian in the 1960s.
There is substantial social value in the object as an object that played a central role in a social revolution in the 1960s that affected every teenager in Australian.

The surfboard is rare in that it is an object central to the development and production of the light weight Malibu surfboards that revolutionised surfing and exploded its popularity among young people across the world especially in Australia.
The object represents the carefree and anti – authoritarian lifestyle of surf and beach culture. The surfboard also represents the changes in surfboard design and a moment in time when surfboard design was started to be taken seriously as an industry.

The importance of the surfboard lies in its potential to interpret these events in the 1960s and developments in surfboard manufacture that let to the adoption and widespread popularity of the activity by Australia’s youth in the 1960s.