These tokens were used by members of the Italo-Australian Club to purchase beer as part of the ‘locker system’ from 1937 until it closed down in 1941 when the war broke out. In 1946, after the war, the Yoogali Club was formed and it then used the tokens until club liquor licences became available in 1951. The tokens were devised as a means of unregistered (unlicensed) clubs serving alcohol instead of members having to bring their own without breaching the liquor laws.

In 1937 Bob Vardanega, Tony Dal Broi to Peter Pavise formed a Club, which came to be known as the Italo Australian Club. The law stated that, among other things, that each member had a locker behind the bar to hold their liquor. The liquor was purchased and then passed over to the manager, who in return would supply a token or tokens to redeem the liquor. 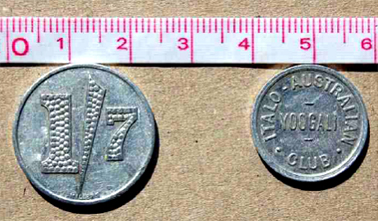 The token or ‘chit’ as it was called was passed over the bar to the steward then he got the bottle from your locker and passed it to you. After the war, the police and the law closed an eye to all this and cash was used as it today.

The formation of Italian Clubs in Griffith explains the local use of drink tokens. Once the Veneti community became firmly established in Griffith, it began establishing its own institutions. In 1936 three farmers and part-time musicians, Pompeo (Bob) Vardanega, Pietro Pavese and Antonio Dal Broi formed the Yoogali Amusement Company (YAC). They had played regularly for Italian weddings and Christmas functions, but had no regular hall to play in. In the following year the company built a hall on Hebden Street at Yoogali to serve as a venue for large community functions. Constructed by local builder Antonio Ceccato, it was called Coronation Hall to mark the coronation of King George VI in 1937, the year it was completed.

The club had no liquor licence but the committee set up two rooms on an adjoining block of land, installing 300 lockers for members to store their alcohol. From then on, there was a Saturday night dance in the hall, bocce on Sunday and the chance to drink and yarn with friends. It was also hired out for wedding receptions and dances by other organisations. The partners played at these functions.

A social club called the Italo-Australian Club was also started by the YAC in 1937. It was the first Italian social club in Griffith. As the club was unlicensed, alcohol was sold using the ‘locker system’.

The Italo-Australian Club functioned well until Italy entered the war, siding with Germany, when the Club was promptly closed down.

The tokens are historically significant as evidence of a comparatively short historical phase of liquor licensing laws and of the colourful role of Italian social clubs. The differences between the Italian social clubs represent subtle differences in allegiances, places of origin, religious loyalties and family networks. These clubs continue to the present day and are still important to Griffith Italian life. The different allegiances are still there.

The Italo Australian Club was the first Italian social club to be formed in Griffith. Italian Clubs, sometimes formed by rival Italian groups, performed the same role as the village osteria or trattoria, where men gathered to talk, drink, play cards and bocce. The tokens hark back to an era of prohibition, in which the Water and Irrigation Commission, in its quasi-governmental rule over the Murrumbidgee Irrigation Area, tried to maintain “dry” towns by limiting liquor licences to a few selected pubs. They also relate to a wider practice across New South Wales of purchase by drink tokens to circumvent the liquor licensing laws. These had prevented the cash purchase of alcoholic drinks in un-licensed premises.

The tokens have intangible significance as a reminder to the Griffith Italian community of the consolidation of Italian migrant community institutions. Clubs played a central role in the retention of cultural traditions and practices by migrant groups, including old rivalries and divisions. The tokens also are evidence of the local, including Italian migrant, community response to prohibition.

The tokens have significant interpretive potential because there are not many objects left from the early history of Italian social clubs.