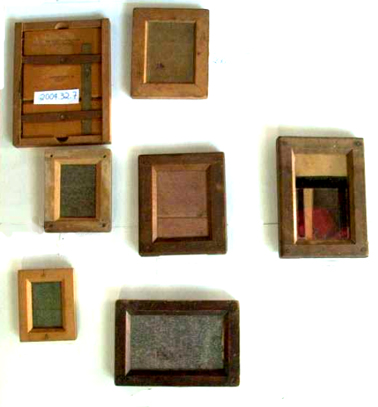 The outbreak of fighting in Europe in August 1914 immediately brought Australia into the Great War. Within one week of the declaration of war all German subjects in Australia were declared ‘enemy aliens’ and were required to report and notify the Government of their address. In February 1915 enemy aliens were interned either voluntarily or on an enforced basis. In New South Wales the principal place of internment was the Holsworthy Military Camp where between 4,000 and 5,000 men were detained. Women and children of German and Austrian descent detained by the British in Asia were interned at Bourke and later Molonglo near Canberra. Former jails were also used. Men were interned at Berrima gaol (constructed 1840s) and Trial Bay gaol (constructed 1889). The internees at Trial Bay Gaol created their own management committees that organised entertainment, sport, culture and arts activities. The photography frames were used by internees to take and develop photographs of the Trial Bay Camp. The internees were members of the photography club at the camp.

The photograph printing frames are historically significant as evidence of a cultural tradition that migrated with the German communities to Australia in the 1840s. The photograph printing frames are evidence of the strong artistic and intellectual traditions of the German internees at Berrima, Trial Bay and Holsworthy.The Kodak Film Tank, the photography equipment and photographs taken and developed by the internees made reflect the strong sense of community, boredom & hobbies and activities to fill in time and a longing for families and children.

The photograph printing frames has aesthetic significance in simplicity and functionalism of design.

The photograph printing frames provides a research tool for historians to explore the First World War chapter of Australian history and give the story a wider meaning in the context of the History of migration & settlement of Australia. The material culture of the Trial Bay Collection reveals of the diverse skills and backgrounds of the people interned there, including their educational and cultural background. Members of the Trial Bay internee community included wealthy industrialists, doctors, academics, publishers, professionals and entrepreneurs from Australia and South East Asia as well as Australian guards and Soldiers.

The photograph printing frames have an intangible significance to German Australian Community as internees and guards families have a common link to the place and many people of German heritage have developed a strong attachment to the place. Many local residents are collectors and amateur historians carrying out many years of research and documenting the history of the site and the Collection. A lot of information still resides in the memories of the South West Rocks community. The place is a focal point for both Australians of Germans decent and visiting German nationals. The photograph printing frames are a part of a larger collection that has strong links to the community. It is part of a group of objects that holds pride of place in the Trial Bay Museum as an inherently German object from World War I.

The photograph printing frames is well provenanced to the site. The frames are rare as they relate specifically to the German internee occupation of the site and it is associated with those particular people who emerge as significant participants at Trial Bay and World War I Australian internment camp history. The Frames are from the Collection of George Mertens a former internee. Other photographers associated with the Camp are Paul Dubotzki and E. Frolich. The photography book was donated in the early 1980′s.

The photograph printing frames are rare in that they relate specifically to the internment occupation of the site and it is associated with those particular people who emerge as significant participants at the Trial Bay Camp and World War I Australian internment camp history. These people include the camp artists Max Hertz, who was also a distinguished orthopedic surgeon, Kurt Viese, who went onto become head of Animation for Disney Animation and Camp photographer Dubotzki. George Mertens and E. Frolich were prominent collectors of the work of the Trial Bay internee photographers. Frolich donated a considerable collection of Trial Bay photographs to the Australian War Memorial

The frames represents the culture and traditions of the German internees. It bears similarities with the photography and craft type artefacts of the internees of the Berrima internment camp. The resulting photographs represent a symbol of German internee’s boredom and taking up creative activities to fill time and document everyday life in the Camp. The Photograph Printing Frames, as part of a larger Trial Bay Internee Collection represents Australia’s strong historic links to Britain and the adherence to British foreign policy after Federation. The Collection represents Australia’s fear of subversion during the war and racial antagonism to cultural minorities in war time. The collection represents a time when Australia still looked to Britain for foreign policy and held deep suspicions of non British immigrants. This is evidenced in the concentration camp nature of the internment, the isolation of the place, the boredom that resulted in the Collection of detailed and precise photographs of everyday life at the Camp.

The importance of the photograph printing frames lies their potential to interpret the place a site associated to internment, the internment camp itself and the experience of German communities. The Collection presents the opportunity to interpret the stories of various individuals who were interred at Trial Bay and those who were deported after the War only to return as migrants and become successful members of the Australian community despite their experiences.