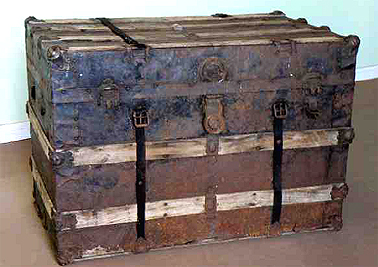 This trunk had travelled through Italy, Germany and California before being taken to Australia. This tin trunk was purchased and used by Bortolo Onisto. Bortolo was born in 1889 in Castelcucco Treviso province, Northern Italy. As a young man of twenty, he travelled to Germany with the trunk and worked as a seasonal worker.

In 1913 he took the trunk again, this time migrating to California, where he found work as a lumberjack. In 1919 he returned to Italy and married. Two years later he travelled back to California to get financially established while his new bride remained in Italy. By 1927 Bortolo had made enough money to return to his home town, purchase a farm and settle into a family life. Bortolo and his wife raised two daughters one son.

The journey to Australia began when this trunk was used again, when Bortolo’s son Tony Onisto migrated to Australia, arriving in Melbourne on board the ocean liner Surriento at 6.00am on the 1st December 1949.

Tony, along with twelve other Italian new migrants, were met at the dock by Nico Salvestro, his wife Omelia and Bob Vardanega. They were then transported to Griffith in the back of the Salvestro Bros Blue Chevrolet truck. There were four people in the cabin, Nico, the driver, Omelia, new arrival Marie Salvestro (Oreste Salvestro’s wife, who was already in Griffith) and the baby Peter Salvestro who sat on Marie’s knee. The entire luggage was loaded onto the back of the truck, including this tin trunk, which was arranged in the middle. The passengers sat around the luggage on the floor under the tarpaulin canopy.

The journey to Griffith took all day and it was a long, hot dusty ride. There were very few bitumen roads in those days and the dust was horrendous. Tony Colla, one of the passengers, recalled, “When we arrived at Tocumwal (New South Wales, near the Victorian border) we had inches of red dust on our heads and shoulders and we were thirsty. At Tocumwal we tasted our first Australian schooner of beer.” 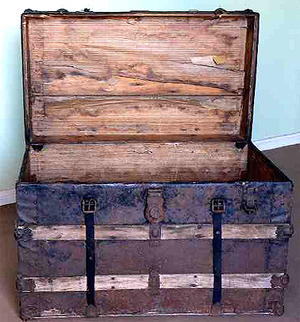 The trunk was a necessary equipment item for creating a new life. All the new migrants had sponsors. Sponsors guaranteed that the new arrivals would receive employment and accommodation on arrival in Australia. Tony Onisto went to live and work for his sponsor Peter Andreatta, at his farm at Lake Wyangan.

In May 1950, Tony went to Queensland (Ingham) cane cutting. He returned to Griffith in January 1951 and worked a fruit season at Duilio Morotto’s at Yoogali. He also worked for Bob Stevenson loading and unloading sand and metal by shovel. By November 1951, Tony had leased 8 acres of land from Alex Beaumont at the corner of Walla Ave and Condon Road, where he grew vegetables (carrots, onions, peas and tomatoes).

At this time he was still boarding at the Noaccentona farm at 909 Hanwood Road. So Tony set about building a place for his wife, who was due to arrive from Italy. His visiting cousin, Erminio Reginato (who was employed on the Snowy Mountains Hydro-Electricity Scheme) helped him build a hut from local bush timber and bought corrugated iron to clad it. This was the welcome dimore’ (home) for Tony’s wife Bruna and the two small children, Donilo and Luigino, who had arrived from Italy on 2nd January 1952. The hut had one door, two louver windows and a dirt floor.

Whilst the vegetables were growing, Tony worked after hours washing carrots by hand in the dams for Piccoli Bros. Later, Piccoli Bros purchased the Giancotti carrot washer to reduce the effort of this task. Tony did not have much luck with the vegetables, as the land was close to a rice paddy and the leaching salt ruined the vegetables. He walked away from that land and took up a new vegetable plot at Bill Spry’s farm at 192 Mansell Road, Hanwood (owned by John Dal Broi in 2007). This had better living conditions and he was there for three years. It was, however, still close to rice paddocks so the ground was not good for vegetables. He moved again to Lake Wyangan where there were a few Italians growing vegetables. He leased a few acres from Lyle Young and in a couple of years (1958) he had made enough money to purchase the farm at 714 Watkins Avenue Griffith, on the Hanwood Road, where Tony and Bruna were still living in 2007. (Interview by Tony Colla, November 2007).

This trunk is of historic significance as a typical piece of equipment used by migrants to transport and store their belongings.

The trunk is a utilitarian item, but has a rustic quality that has aesthetic value in its own right.

This item has some research significance in migration history.

The trunk has symbolic significance to Italian families as evidence and a reminder of hard times as migrants who travelled into a new homeland.

The history and provenance of this trunk is well established.

The trunk is very typical and highly representative of storage equipment carried by migrants travelling to a new homeland.

The trunk is not a rare item and would be widely recognised by migrant families and their descendants.

The worn condition of the trunk shows evidence of use.

This trunk has interpretive potential as an example of typical baggage used by migrants.