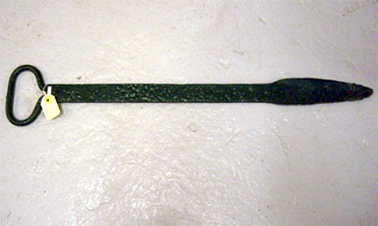 Green painted steel gouge manufactured from a straight rectangular cross sectioned length of steel 40 mm wide and 5mm thick. It has an oval handle at one end and at the other a leaf shaped blade with a shallow scoop, tapering to a rounded point. The edges of the blade are worn and jagged from use, and the tip is rusty, otherwise in good condition. Dimensions: total length 780 mm. Handle maximum length 90 mm, maximum width 190 mm, shaft length 560 mm, width 40 mm, height 5 mm. Gouge (blade) approximately 220 mm long, maximum width 60 mm.

Wooden handled knife with narrow double edged blade tapering to a sharp point. The handle has a rounded knob at the end and is worn smooth with use. The blade is attached with two screws. In good condition apart from some rust on blade. Dimensions: total length 248 mm. Handle 95 mm long, maximum width 28 mm at knob. Blade 153 mm long, tapering from maximum width of 23 mm at handle to a sharp point. 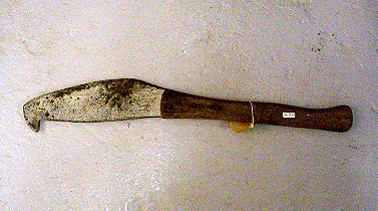 Long handled cane knife with wooden handle and straight steel blade. The blade is attached to the handle with four nuts and bolts and washers, two at the widest part of the handle where it adjoins the blade and two below. The blade is straight sided on one edge, with a right angled hook at the end. The other edge is curved and sharpened; it shows signs of wear. The wooden handle is worn smooth from use. The blade is covered with a white patina, perhaps from banana sap. Otherwise in fair condition. Dimensions: total length 655 mm. Handle 380 mm long, maximum width 57 mm where it adjoins the blade. Blade 275 mm long measured from the handle, maximum width 85 mm, at the end across the hook. 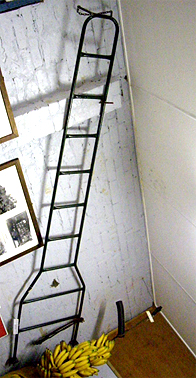 Green painted metal ladder made of hollow steel piping approximately 26 mm in diameter with a curved top and metal chain for securing it to the banana stool. At the base of each leg there is a square foot with a sharp spike beneath it to dig into the ground. The ladder is wider at the base, to the height of the first two rungs, then narrows to the next seven rungs. Dimensions: height 3.55 m. Maximum width at base and to height of first two rungs 690 mm, narrowing to 360 mm on next seven rungs. Depth 26 mm.

Wooden yoke, rounded on the upper surface and hollowed out underneath to fit over the shoulders. There is a semi- circular scoop in the centre of one edge to fit around the neck. The yoke tapers to a rounded point at each end. A hole is drilled in each end of the yoke, and lengths of rope approximately 875 mm long are attached, with 75 mm long metal hooks at the ends. Dimensions: length 875 mm, maximum width 65 mm, maximum depth 48 mm. Scoop for neck 205 mm wide. One end of the yoke is broken across the hole; otherwise in fair condition.

These banana growing implements are a selection of the banana industry items in the collection of Tweed River Regional Museum. The first attempts to grow bananas commercially in the Tweed were made in the 1890s, on elevated areas of volcanic soil at Duranbah, Terranora and Bilambil. Bananas cannot withstand frost and need to be grown at least 30 metres above sea level, preferably on north or east facing slopes. At first growers sold their fruit locally. Samuel Farrant, who planted out nearly three hectares of land on the Condong range, pioneered efforts to extend the market. In 1910 he shipped bananas to Sydney, where he successfully sold them. The first banana shipments were sent in bunches; it was some years later before they were packed individually in wooden boxes.

In 1909 a disastrous hurricane swept over Fiji, devastating the banana plantations there. Local growers were quick to take advantage of the gap in the market and extended their plantations. The Government imposed a tariff on bananas imported from Fiji to protect the new local industry, and banana growing boomed. In 1916 the Tweed Fruit growers Association was formed to protect the interests of growers and assist them with marketing. Banana growing had a number of advantages over other crops: their cropping period was spread over the whole year, providing a steady market supply and a regular income for growers; they were more resistant to insect pests than other fruit; and they could be grown on steep terrain which was unsuitable for most other farming. In the early 1920s the disease bunchy top, probably introduced into Australia from Fiji, spread rapidly and decimated the Australian banana industry. Many banana farmers in the Tweed sold out and turned to dairying or growing sugar cane.

Enterprising Chinese agents and wholesalers dominated banana marketing in Sydney and Melbourne from the late 1890s. From about 1917 they began buying land in the Tweed and Brunswick valleys to grow bananas, using Chinese labour. They encountered a hostile reception from local growers and returned soldiers who accused them of taking up land that was rightfully due to them. Newspapers warned of an alien invasion backed by wealthy Chinese merchants. After bunchy top decimated banana plantations by the mid 1920s, most Chinese left the growing side of the banana industry, but they continued to dominate wholesale marketing. The Murwillumbah firm of Chow Kum & Co was the local agent for many banana growers in the early years of the industry.

The Sikh community have contributed significantly to the banana industry in the Tweed. Many came to the Tweed from Woolgoolga on the mid north coast, the largest single community of Indians in Australia. Descendants of migrants who arrived in Australia in the 1880s and 1890s, Indians were mainly involved in banana growing and other rural industries. By the late twentieth century Indians in the Tweed had diversified into a wide range of occupations including retailing and running a local bus company. As the dairying industry began to decline in the late 1940s the steep hillsides of former dairy farms were leased and cleared for bananas. It was heavy, labour intensive work, clearing and grubbing the steep slopes and chipping and weeding around the growing banana stools. Many Anglo Europeans and the diversity of post-war migrants who came to the Tweed worked seasonally on banana plantations and sugar cane plantations in the Tweed and went fruit picking in other regions such as the Riverina and Victoria at other times of the year. Because banana growing required little initial capital, many were able to earn a productive living, settle in the Tweed and buy their own land. Mick Mesic, who arrived in Australia in 1957 from Slovenia, was one migrant who succeeded in earning enough money to buy his own plantation. He was sponsored by his uncle Milan who had started out in Dunbible working on banana plantations with other migrants, before buying his own banana farm at Dungay. Prisoners of war like Italian Isippi Bonifacio were also employed as labourers on banana plantations during the war. Isippi went on to buy his own plantations at Crabbes Creek and then Cudgera Creek.

In 1937 the NSW Department of Agriculture and the Banana Growers Federation jointly established an experimental research station at Duranbah. The work at the research station on different banana varieties, irrigation, use of fertilisers, weed control and the use of bunch covers to promote growth and ripening modernised the banana industry. In the 1950s there were over 30,000 acres of banana plantations in northern New South Wales, three times the acreage in Queensland. Much of the production of the remaining commercial timber mills in the Tweed went to supplying the demand for banana cases. But over the next few decades New South Wales banana growers faced growing competition from the banana industry in Queensland, and the dominance of supermarket chains also had a major impact.

The banana cultivation tools in the Tweed River Regional Museum demonstrate the hard manual labour involved. The steep hillsides on which bananas were grown meant that most of the work of clearing and planting had to be done by hand using mattocks and hoes. Before the use of herbicides after the Second World War weeding and chipping was also done by hand with a hoe. Farmers modified and repaired their tools with recycled materials; the collection of Tweed River Regional Museum includes a hoe extended with an old saw blade, used on a banana plantation. The introduction of tractors and rotary hoes made life easier, but farmers still have to careful on steep slopes, reversing back down if there is insufficient room to turn around.

These agricultural tools used in cultivating bananas are a sample of the banana industry items in the collection of Tweed River Regional Museum. The double edged dehanding knife is used to cut off individual hands of bananas from the larger bunches. The gouge is used to take out the suckers that grow up around the banana stool, leaving one healthy plant. Cane knives are used for a number of purposes in banana plantations, for cutting the bunches of bananas from the stool, removing the leaves around the banana bunch before cutting it off, and trimming the suckers selected for planting. The steel ladder is designed for use on the steep slopes of banana plantations, with its sharp spikes on the base to anchor it into the ground and the chain at the top to anchor it to the banana stool.

These implements have historical and technological significance as they demonstrate the skills of ‘making do’ – improvising and modifying tools to make the heavy work of cultivating bananas easier. They provide evidence of the hard manual labour involved in clearing land for banana plantations and planting and cultivating the banana stools, They also demonstrate the difficulties of mechanisation on the often steep terrain where bananas are grown.

Boileau, Joanna, 2006, Caldera to the Sea: A History of the Tweed Valley, Tweed Shire Council, Murwillumbah.

Kijas, Johanna , 2007, The Other Side of the World: International Migration to the Tweed 1940s to 1960s, Tweed Shire Council, Murwillumbah.