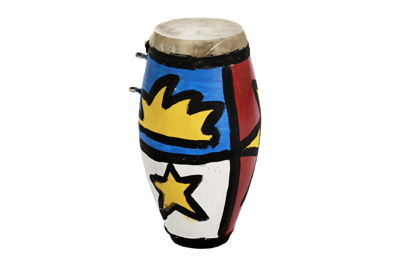 Object description
A small wooden chico drum painted in segments outlined in black, on a red, white, and blue background with yellow symbols of a star, a sun and the Sydney Opera House. Metal bands surround and secure a stretched and cured cowhide at the top and contain the laths around an open ended base. A hanging strap is attached to metal loops below the metal band around the top. Dimensions: H 330mm, top Diam. 130mm, base Diam. 90mm.

The drum is a symbol for the Candombe Yauguru, an Afro-Uruguayan drumming and dancing group that formed in Fairfield to continue the rhythmic tradition that is at the heart of Uruguayan culture and heritage. Condition: Excellent.

This is a model of the smallest Candombe drum known as chico, which is one of three tambores (drums) that forms the Uruguayan cuerda, a unique Afro-Uruguayan rhythm. Candombe is a generic term for all Afro-Uruguayan dances that has become an important part of Uruguayan culture for over 200 years. It has its origins in the Spanish slave trade, which brought Africans mostly from Bantu areas in Eastern and Equatorial Africa and the remainder from Guinea, Senegal, Gambia, Sierra Leone and Ghana to Montevideo, the capital of Uruguay in 1750.

The slaves’ African culture may have been repressed by the Spanish, but their need to express and preserve their ancestral memory was maintained through their rhythmic drumming on their tambores, the tambor piano, the tambor chico and the tambor repique. Candombe was considered by the authorities at that time ‘to be a threat to public morals’[1], and the practice was banned and participants were punished. However, the African dance rituals known as tangós survived after slavery was abolished in Uruguay in 1846, and the word tangós includes the drums, dances and the places where the rituals were held.

A traditional Candombe group (Comparsa) consists of the following dancing characters: Lubolo, a white man with face paint who plays the drums; Mama vieja, the matriarch of the tribe; Gramillero, a medicine man responsible for the wellbeing of the people, and Escobero, who dances with a stick or broom to rid the presence of evil. All of these characters have unique appearances and different ways of dancing.

Candombe, as performed today in Uruguay, is a procession of drummers who perform Ilamadas or calls, as they march slowly down the streets in the manner of being in chains, a reference to the slaves of the past. As part of the costume used by drummers in the parades, the laces which tie their shoes on are crossed several times and tied around their legs to symbolise the lashings the slaves were given. Competing groups are distinguishable by their own rhythms, which reflect the origins of their local or regional culture.

The three drums are at the heart and soul of the Afro-Uruguayan tradition with the piano being the largest in diameter (approximately 40.5cm) with a bass sound; the repique (ricochet) having a diameter of approximately 30.5cm and a tenor sound; and the chico (small) having a thinner drumhead with a diameter of approximately 21.5cm and a soprano sound. All drums are played with the butt and fingers of both hands. The drums of the original slaves were made from tea or coffee barrels covered with cow, donkey or horse hide that was treated and stretched. The stretched hide, which was originally secured by steel bands that were nailed in place, needed to be warmed in front of a fire before playing to achieve the correct pitch. 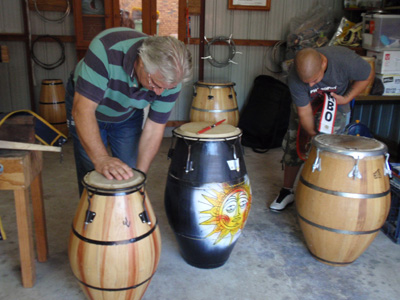 Uruguay is an eastern South American country the size of the state of Victoria, wedged between two regional giants, Argentina and Brazil, and currently with a population of 3 million people. During the first half of the 20th century, it was one of the richest countries of South America with a favourable climate, agricultural exports of wool and beef, and a small population. Unlike many countries of Latin America, progressive Uruguayan governments during this period were able, in free and democratic environments, to provide advanced social reforms, which allowed Uruguay to become a recognised for its progressive welfare and education policies.

Uruguay was one of the most highly urbanized societies in Latin America, with the capital Montevideo holding half the nation’s population, and the other cities having populations not much larger than 100,000. It was not widely recognised by the nation at the beginning of 1970, that Montevideo could possibly provide the backdrop to what was to tear the city and the nation apart. Montevideo was a city with a large population of skilled middle class residents and literacy rates were high.

In 1960, unemployment increased with the drop in the demand for Uruguayan primary products. The currency was devalued, and high inflation and social unrest resulted. A new crisis added to Uruguay’s problems in the form of urban guerrillas, the Tupamaros (taking their name from the Inca leader Tupac Amaru), who worked in the cities rather than in the hills outside the towns, successfully destabilising the everyday life of the nation.

Conservative governments were not committed to continuing with welfare reforms, and demonstrations were brutally repressed by the police and the armed forces. Systematic abuses of civil rights by the military were used as “government policy” to deal with civil unrest.[2]

From the mid 1960s, after years of influence within the government of the day, the military staged a Coup de Etat in 1973. The military regime became repressive and systematically used torture, leaving approximately 160 people unaccounted for, and accumulated the largest number of political prisoners per capita in the world.[3] After 12 years of dictatorship, democracy was restored in 1985.

From 1960, a country that had previously been a country for receiving migrants from Italy, Spain and Germany before and after both World Wars, Uruguay became a country of emigrants. While some Uruguayans migrated to Australia in the early 1960s, most arrived in 1969. During the 1970s, migration to Australia increased and a large proportion of Uruguayan migrants were housed at the Endeavour, East Hills, Westbridge and Villawood Migrant Hostels. Approximately 9,000 Uruguayans live in Australia and approximately 78% live in Western Sydney with the most concentrated populations living in Fairfield[4].

Candombe Yauguru (Uruguay in reverse) began with very little experience in Fairfield, but came together in 1997 to help raise funds for hospitals in Uruguay. The majority of members are from, or descendants from Uruguay, with some members from other Latin American countries.

In January 2005, Candombe Yauguru was invited to participate in Uruguay’s most popular festival of Candombe, Las Llamadas held in the streets of Montevideo. Candombe Yauguru performed with the group “Sarabanda” that invited them to perform at the festival and were successful in winning first prize in the Drumming. The Candombe Yauguru are able to play with other groups at Las Llamadas, because they have learned the rhythms from many groups to the amazement of traditional drumming groups who play only those rhythms that they have lived with, in their region, area or neighbourhood. 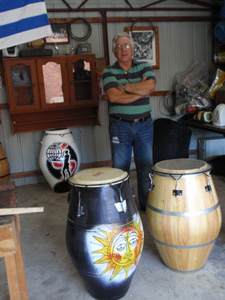 Candombe Yauguru attend the festival in Uruguay each year, and their costumes and the designs on the group’s drums are changed to reflect the colours and symbols that identify the group as Uruguayan-Australians. The drum, with the black background and the radiating sun, provides a symbol that has meaning for both Uruguayans and Australians, and was used in the festival of 2009. The design was inspired by the sun symbol of Uruguayan artist, Carl Paez Vilaro. The Australian symbolism on the white drum in the background was designed to represent ‘Earth Care’ with koori dot painted outlines. 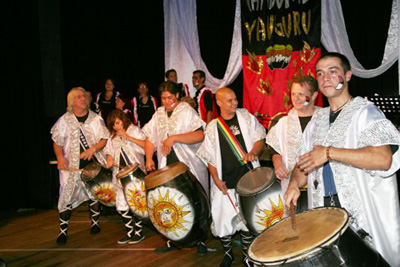 The condombe drums have historical and cultural significance for the Uruguayan community in Fairfield. Just as it provided respite for the African slaves who brought this rhythmic drumming from Africa, it continues to remind South American migrants of the difficult social, political and economic hardships that caused their families to migrate. The cultural continuity for Uruguayan migrants and descendants is maintained through drumming schools and workshops for children as young as three through to teenagers.

Each hand made drum is unique and with the continuing changes in the decorative designs on the drums, it tells the story of the evolution of Uruguayan culture in Fairfield, and how it makes its presence felt at community celebrations in Western Sydney, and in Montevideo, Uruguay.

The drums are well provenanced. The maker of the model drum in the FCM&G collection is Fairfield resident Raul Pamies, who was born in Australia of Uruguayan parents. Raul began making the drums out of interest and learned the basics from a wine vat maker. With each visit to Uruguay, he continues to acquire new techniques to refine his designs. For example, his new drums have hides that are now secured by steel hoops instead of a fixed steel band. This allows the hoop to be tensioned by adjustable brackets allowing the correct pitch to be reached without the need to warm the drums by fire prior to playing. Making the drums is still a hobby, although time consuming, with each lath (mostly oak) being steam bent and cured by Raul in his backyard workshop. The finished drum takes approximately two weeks to make, depending on weather conditions. 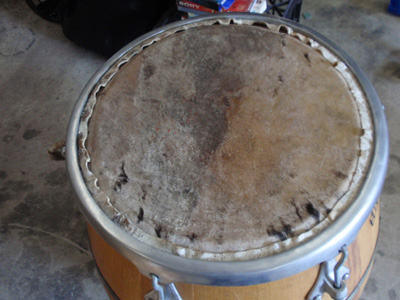 Uruguayan Juan Carlos Quijano, also a resident of Fairfield, is the designer of the decorative theme on the model drum, and for all designs on drums that Candombe Yauguru use.

Each year since 2005, the Candombe Yauguru group has participated in Uruguay’s festival of Candombe in Montevideo. For the 2005 Las Llamadas Festival, Juan-Carlos Quijano decorated the group’s drums with the symbols of the sun and the Sydney Opera House so that their Australian connection was clear in the festival’s parades. This is the design replicated on the model drum in the Museum, and reflects the primitive constructivist art work of Uruguayan artist Joaquin Torres-Garcia.

Juan Carlos Quijano is the Director of Candombe Yauguru drumming and dancing group. The group performed at the My Culture, Your Culture exhibition & events series at Fairfield City Museum and Gallery in October and November, 2005 and the model chico drum was donated to the Museum after that event. 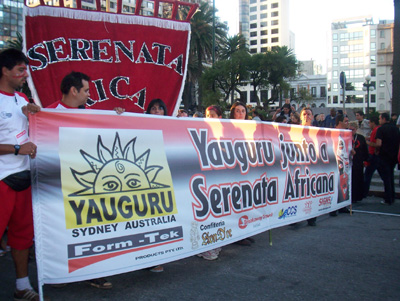