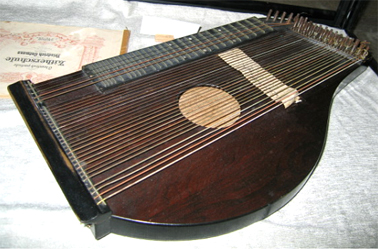 Object/Collection Description
The concert zither is made from wood, metal and cloth. It is in excellent condition with the laminated sections being in sound condition and the tuning mechanisms in working order. Dimensions: 580mm long x 300mm wide x 70mm deep.

The concert zither dust cover is made from red felt shaped to the profile of the zither. It is hand embroidered with a music stand, music book leaves and flowers with a scalloped edge. Dimensions: 525 mm long x 315mm wide. 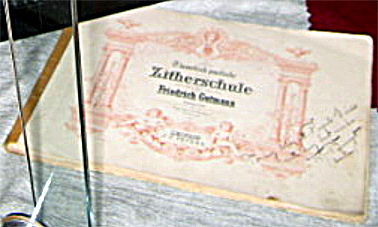 The zither music book is eight pages and is written in German & English. The book has a white faded cover with the title “Zitherschule” and is inscribed in black in “To my diligent pupil Evie with my best wishes, KP Fingst”. The spine has been repaired with brown adhesive tape and there is evidence of insect attack on pp 3 -8. Dimensions: 195mm long x 285mm wide.

The outbreak of fighting in Europe in August 1914 immediately brought Australia into the Great War. Within one week of the declaration of war all German subjects in Australia were declared ‘enemy aliens’ and were required to report and notify the Government of their address. In February 1915 enemy aliens were interned either voluntarily or on an enforced basis. In New South Wales the principal place of internment was the Holsworthy Military Camp where between 4,000 and 5,000 men were detained. Women and children of German and Austrian descent detained by the British in Asia were interned at Bourke and later Molonglo near Canberra. Former jails were also used. Men were interned at Berrima gaol (constructed 1840s) and Trial Bay gaol (constructed 1889). At these camps the internees organised themselves in to arts & craft societies and organised large German events and festivals to pass their time and to retain a sense of identity.

The internees like those at Trial Bay Gaol and Holsworthy formed choirs and orchestras. From very early on in 1916 the choir at Berrima gave concerts and shortly after the orchestra also gave concerts. These concerts took place on the banks of the River and the internees’ canteen provided cakes and coffee. One of the camps publications Theatre News notes under the heading ‘Art & Literature’ music recitals of the viola, mandolin and zither. 2

The camp had an orchestra, a string orchestra and a brass band. Each gave concerts on a different night of the week and on weekends. This tradition is consistent with the musical tradition of the German migrant communities of South Australia and the Riverina, where bands and orchestras feature large in the cultural landscape of the place. Before World War 1 crews of German cargo steamers formed bands and gave concerts in Sydney’s parks and gardens while their vessels were in port.3 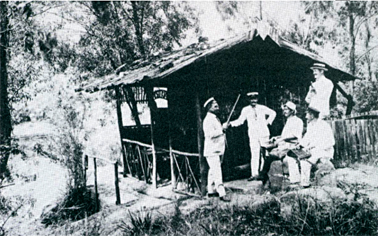 A wide variety of music was played at the Camp as evidenced by the surviving programs and music. The repertoire consisted mainly of German and Austrian music with the waltzes of Strauss, von Suppe and Waldteuffel. French composes such as Massenet and Gounod were also performed.

Like the internees of Trial Bay this activity provided a distraction to camp life and reinforced a sense of their own cultural identity. But unlike the Internees at Trial Bay, who considered themselves among the top 500 of the German elite in New South Wales, the Berrima internees were seamen, some of whom who had served time on the windjammer clippers and were used to long periods away from home and music was very much a group activity appreciated by them. 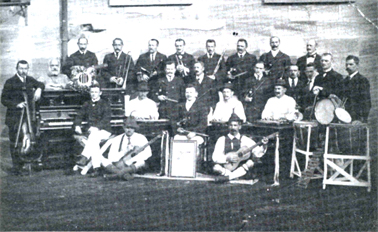 The Berrima Internees Orchestra, c.1916. Karl Pfingst is seated at the zither on the right. Courtesy Berrima District Museum

The zither provides a research tool for historians to explore the First World War chapter of Australian history and give the story a wider meaning in the context of the History of migration & settlement of Australia. The material culture of the Berrima Internee Collection reveals the diverse skills and backgrounds of the people interned there, including their educational and cultural background. Members of the Berrima internee community included Ships Officers, engineers, navigators and seamen. The objects they produced and used that remain in the collection reflect this diversity. An object such as the zither also displays the level of expertise of the internees and also the amount of time they invested in to musical and artistic activities keep themselves occupied and in good spirits. It appears that unlike Trial Bay and Holsworthy the internees at Berrima were, generally, cheerful and optimistic. This could be explained by the mercantile background of the internee’s background and the traditionally long periods spent away from home.

The zither has intangible significance to the German Australian Community as internees and guards families have a common link to the place and many people of German heritage have developed a strong attachment to the place. Many local residents are collectors and amateur historians carrying out many years of research and documenting the history of the site and the Collection. A lot of information still resides in the memories of the Berrima community. The place is a focal point for both Australians of German decent and visiting German nationals.

The zither’s provenance is strong. This zither, now on display in the Berrima Museum, is the one owned by Karl Pfingst an internee at Berrima and was given to Miss Alice Evelyn Welch of Berrima when his internment ended. It was purchased by the Society in 1995.

The Berrima Internment Collection is rare in that it relates specifically to the German internee occupation of the site and it is associated with those particular people who emerge as significant participants in World War I Australian internment camp history.

The zither represents the culture and traditions of the German internees. It bears similarities with the musical instruments of the internees of the Trial Bay camp. This object shows a strong eye for accuracy and detail and a represent a symbol of German internee’s patriotism and defiance as prisoners. The zither, as part of a larger collection represents the German experience in Australia during World War one and Australia’s strong historic links to Britain and the adherence to British foreign policy after Federation. The Collection represents Australia’s fear of subversion during the war and racial antagonism to cultural minorities in war time. The Collection represents a time when Australia still looked to Britain for foreign policy and held deep suspicions of non British immigrants.

The zither’s importance lies in its potential to interpret the place as a site associated to internment, the internment camp itself and the experience of German communities. The Collection presents the opportunity to interpret the stories of various individuals who were interned at Berrima Gaol and those who returned to Germany after the War only to return as immigrants and become successful members of the Australian community despite their experiences.