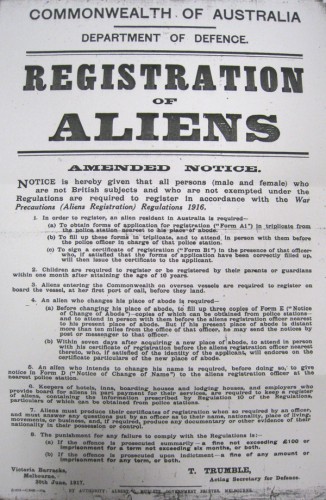 Registration of Aliens Poster, c.1917. Courtesy National Archives of Australia
Germany was formed in 1871 when Bismarck united the German states. By 1914 it was a powerful country with a strong army but envious of Britain’s Navy and the empires of Britain and France. Although Britain had a large empire it feared the growing power of Germany and did not want Germany to get new colonies. France had lost some rich land to Germany in 1871. Some of the French wanted revenge, others feared their strong neighbour.

Russia too was concerned about the new strong Germany and wanted to control the Balkans to ensure its ships could reach the Mediterranean Sea. The Balkans – including Serbia, Bulgaria, Romania, Albania and Greece – was considered the ‘powder keg’ of Europe and the big European powers wanted control of it.

Austria and Hungary federated in 1867 to create a large empire, but many Hungarian people wanted to be free of Austrian control. Austria also wanted to control the Balkans and feared Russia’s power there. Serbia hated Austria because of their control of Hungary and tried to stir up trouble against it. Turkey, which controlled an old and crumbling empire, feared both Russian and Austrian power in the Balkans. It was out of this tense and paranoid situation that World War One exploded.

In 1914, Franz Ferdinand, a member of the Austrian Royal family, was assassinated in Serbia by a group of Serbian nationalists known as the Black Hand Society. The Black Hand Society wanted an independent Serbian nation free from Austrian control. As a result, Austria declared war on Serbia. Most of Europe had divided itself into alliances to protect each other if war broke out. Russia was an ally of Serbia and Germany of Austria – so when war broke out, Germany and Russia were drawn into it. France and England were allies of Russia (Triple Entente Alliance) and Italy and Turkey allies of Germany (Central Powers Alliance). All of these countries were pulled into the fight and Europe was at war. 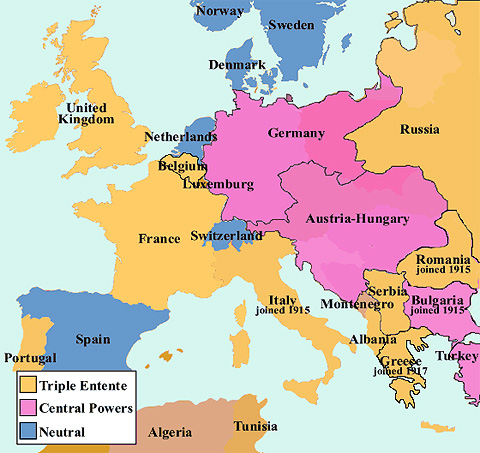 When England went to war against Germany and her allies, Australia, still tied to Britain’s defence policies, was willingly drawn into the conflict, providing troops and resources. In fact when war broke out, so many men volunteered that the Army could not provide enough weapons or uniforms. Those who didn’t enlist worked in factories and farms. Wheat farmers planted large crops because they thought England would need extra supplies of food. Graziers sold wool to the government so that uniforms could be made. Families stuck pins into maps to show where the fighting was and who was winning. Women knitted socks for soldiers and worked for the war effort raising money and packing Red Cross boxes. The Australian Government increased taxes to pay for the war. In October 1914, a new law gave the Government greater control over people’s lives and more than 3400 people were sent to prison for crimes such as: